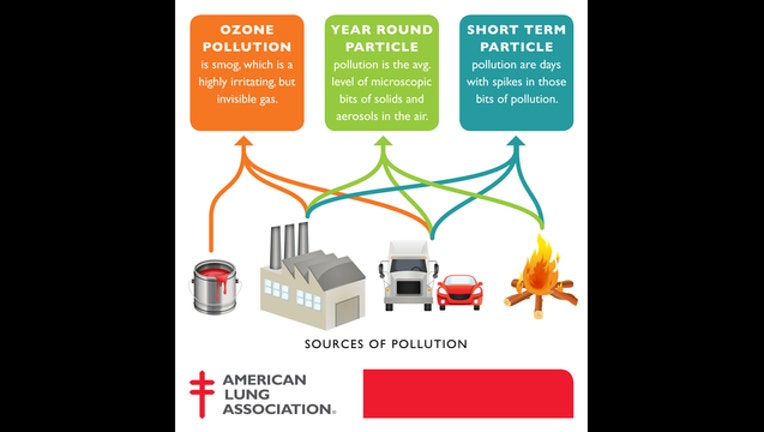 Despite both Dallas and Tarrant County earning Fs in the ozone category, Dallas moved to No. 13 from 11 on the list of most-polluted cities in the nation, its best ranking ever. The metro area’s annual particles levels were also their healthiest and are still well under the national air quality standard. On the list of most-polluted cities for short-term particle pollution, Dallas’ ranking fell to 72, compared to last year’s 53rd spot, and Dallas and Tarrant County record Bs in short-term particles category.

Houston’s levels, though, were more unhealthy in the 2017 report. Houston ranked 12th on the list of most-polluted cities for ozone, and the area saw more unhealthy days in short-term particle pollution. The metro area’s year-round particle pollution levels stayed the same from last year, when it recorded its best numbers ever. Harris County earned an F in ozone pollution and a C in short term.

“The 2017 ‘State of the Air,’ report found continued improvement in air quality across the country, but 40 percent of Americans still live with unhealthful levels of either ozone or particle pollution placing their health at risk,” said Holly Torres, executive director of the American Lung Association in Texas - Dallas. “Even though Dallas saw improvements from last year’s report, all Texans are still exposed to high levels of pollution, which can put them at risk for premature death and other serious health effects such as asthma attacks, worsened chronic obstructive pulmonary disease (COPD) symptoms and cardiovascular harm. Our high levels of year-round particle pollution also place our citizens at greater risk for lung cancer.”

The most notable national findings of the 18th annual report were lower overall ozone levels and lower year-round particle levels, offset by a continued trend of extreme short-term spikes in particle pollution, often related to wildfires or droughts. The report finds that the health of 43 million people across the country are at risk from these dangerous spikes in particle pollution.

Ozone Pollution in Dallas and Houston

Compared to the 2016 report, Dallas experienced fewer unhealthy days with high ozone levels in this year’s report, while Houston reported more. Nationwide, ozone pollution has decreased, thanks to the Clean Air Act’s success at cleaning up major sources of the emissions that create ozone, especially coal-fired power plants and vehicles. However, research shows that climate change causes warmer temperatures, which makes ozone harder to clean up.

“Ozone is harmful to public health and especially children, older adults and those with asthma and other lung diseases,” said Katie Jones, executive director of the American Lung Association in Texas – Houston. “When they breathe ozone-polluted air, too often they end up in the doctor’s office, the hospital or the emergency room.”

Particle Pollution in Dallas and Houston

Particle pollution is made of soot or tiny particles that come from coal-fired power plants, diesel engines, wildfires and wood-burning devices. These particles are so small that they can lodge deep in the lungs and trigger asthma attacks, heart attacks and strokes. They can even cause lung cancer, and early death.

“Across the country, year-round particle pollution levels have dropped thanks to the cleanup of coal-fired power plants and the retirement of old, dirty diesel engines,” Torres said. “This is something we’ve benefited from in the Dallas region, as we’ve seen a reduction in our year-round particle counts.”

Climate is known to cause increased heat, changes in weather patterns, drought and wildfires, which   contributed to the extraordinarily high numbers of days with unhealthy particle pollution in some cities, including Dallas and Houston.

“Healthy air protections are under attack, and must be defended to save lives here and across the country,” said Jones. “Air travels from one state to another, so only federal protections can help protect the air we all breathe. The Lung Association in Texas calls on President Trump, EPA Administrator Scott Pruitt and members of Congress to fully fund, implement and enforce the Clean Air Act for all air pollutants – including those that drive climate change and make it harder to ensure healthy air for all Americans.”

Learn more about Dallas rankings, as well as air quality across Texas and the nation in the 2017 “State of the Air” report at Lung.org/sota.

About the American Lung Association in Texas

The American Lung Association is the leading organization working to save lives by improving lung health and preventing lung disease, through research, education and advocacy. The work of the American Lung Association is focused on four strategic imperatives: to defeat lung cancer; to improve the air we breathe; to reduce the burden of lung disease on individuals and their families; and to eliminate tobacco use and tobacco-related diseases. For more information about the American Lung Association, a holder of the Better Business Bureau Wise Giving Guide Seal, or to support the work it does, call 1-800-LUNGUSA (1-800-586-4872) or visit the newly redesigned website: Lung.org