Some parents in Spring say they are outraged after a 12-year-old boy in the neighborhood pointed an airsoft gun at their 13-year-old son and pulled the trigger. FOX 26’s Damali Keith has the story.

HOUSTON - Some parents in Spring say they are outraged after a 12-year-old boy in the neighborhood pointed a gun at their 13-year-old son and pulled the trigger. Turns out it was an airsoft gun, but the Gordons say no one seems to be taking it seriously.

"Of course, being the age he was, he was concerned about it, as we were concerned about it," says Precinct 4 Constables' Office Assistant Chief Toby Hecker. "We also are aware of that because there’s a TikTok challenge where they’re going around shooting people with these soft pellets."

However, in this case, the boy didn’t fire any type of projectile from the airsoft gun.

13-year-old Jeremiah Gordon had been outside with his cousin last Friday in his front yard and says he heard kids in a backyard yell, "school shooter, school shooter."

Moments later he says his neighbor pointed the long gun at him and pulled the trigger.

"At that point, I thought I was going to lose my life right there," says Jeremiah.

His parents say a second boy then took the gun, pointed it at their son, and also pulled the trigger.

"They didn’t just point the gun, they pulled the trigger. That’s different," Jeremiah’s dad Kevin Gordon said. "If they were playing with one another then we can say that these are kids just playing around. When do we take it seriously? We know you can’t pull a gun like this at school. You can’t point a gun like this at a police officer. Let’s look at history now. Was Tamir rice just goofing off?"

"Man, I’m trying not to cry," says Jeremiah’s mom Jennifer Gordon. "If the shoe had been on the other foot, I think this would have gone a totally different way... I think he would have been arrested."

The Gordons say in the wake of the Uvalde school shooting and the recent mass shootings, they were horrified and thought the boy's mom would be as well.

"I did not want to file charges, but after the parent was nonchalant about it, then I was like hey we need to do something about this," says Mrs. Gordon.

So, the Gordon’s called the police.

"It’s not a game," says Asst. Chief Hecker. "You think it’s a game, especially kids at that age think it’s funny to pull on someone else to do this because it’s not a real gun."

"They know it’s not a real gun nobody else knows it’s not a real gun," Asst. Chief Hecker continued. "Whether it’s a real gun or not when you shoot somebody with any type of projectile you could have charges filed on you. If you shoot somebody, and it causes pain, it’s still an assault. A lot of these guns look like real guns and if you pull this gun out on the wrong person the consequences may be a lot worse than you spending the night in jail." 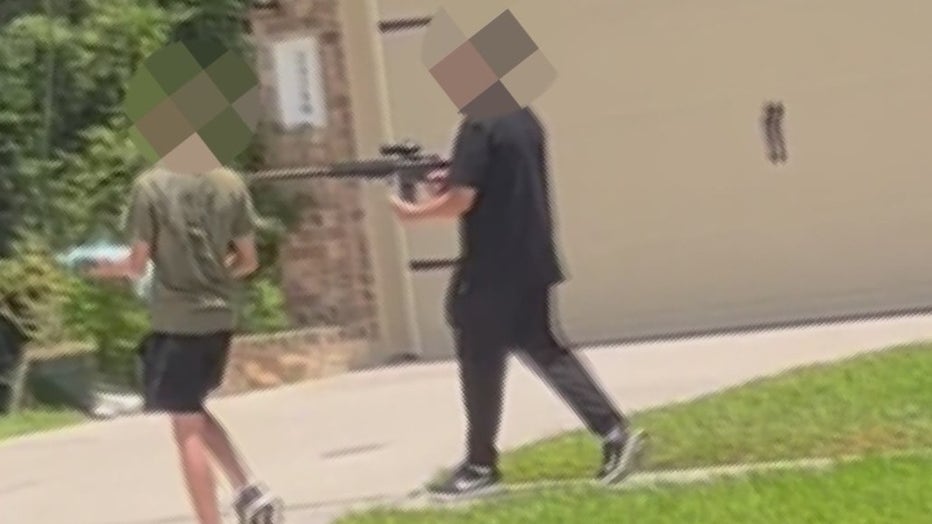 We went by to talk with the mom of the boy who pointed the airsoft gun.

"Oh, it was inappropriate, and I talked to my son about it," she told us before going into the house and closing the door.

The Gordons say the boy hasn’t even apologized, and they say the group of boys laughed when Mrs. Gordon told them not to point the gun at her son.

"So, it’s a joke now? No one’s taking this seriously…before you guys arrived, I got teary-eyed just thinking about all of this just because we have to have this conversation now with our son. Now I have to get my son therapy," says Mr. Gordon who says his son has been different, seemingly traumatized since this happened.

"He may be sitting here or over at the bar, and I look at him, and he’s not even looking at his phone, he’s not paying attention to the TV," added Mrs. Gordon. "He’s just in deep thought. So, I have noticed it. He’s quiet. That’s now how he is normally. It sends chills down my spine because I’m like what is the DA going to do about this? I was angry at first. It turned into hurt. It turned into fear. It turned into I’m just trying not to cry. Our child matters."

Jeremiah says he initially didn’t realize the gun that was pulled on him had an orange tip, which doesn’t always mean it’s a fake gun.

"We’ll have people that have a real gun that paint the tip of it orange so that police officers think it’s a pretend gun," explained Asst. Chief Hecker. "So, when we can’t tell the difference and we’re trained with this stuff there’s no way an average citizen especially a young juvenile male is going to tell the difference."

So why weren’t charges filed against the 12-year-old?

"We did consult with the District Attorney’s Office, but there was no projectile fired," says Asst. Chief Hecker. "There was no pain. It didn’t meet the elements of a crime to charge him with this."