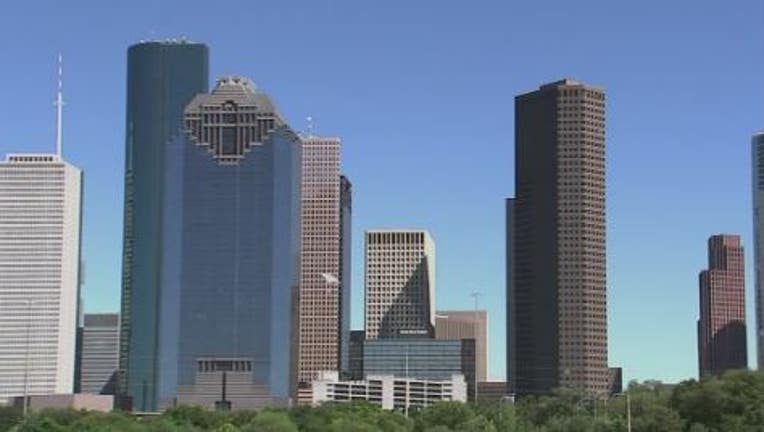 HOUSTON - The growing suburbs of Houston are sinking faster than the city itself, and that could lead to increased risks of flooding and shaking in those areas, according to researchers.

The study by the University of Houston published in the journal Remote Sensing found that subsidence, or a gradual sinking of the ground, is happening at a faster rate in cities like Katy to the west of Houston, The Woodlands to the north and Fresno to the south.

According to the study, researchers used satellite data to determine subsidence rates. Areas northwest and west of Houston sank about 3.5 inches between 2016 and 2020, with a rate of about three-quarters of an inch per year. A similar subsidence rate was also found south of Houston.

The Channelview and Mont Belvieu areas to the east-northeast of Houston also saw higher rates of subsidence.

Shuhab Khan, a professor of geology at U of H, led the study. He said that subsidence was once a rare phenomenon that has become much more common around the world.

"There are 200 locations in 34 countries where there’s known subsidence," Khan said. "Cities in the northern Gulf of Mexico, such as Houston, have experienced one of the fastest rates of subsidence."

Any kind of underground movement can cause land to sink.

According to the U.S. Geological Survey, the subsidence in the Houston area is primarily caused by the pumping of groundwater out of aquifers. As the water is removed, the sediment contained in the aquifer compacts and leaves less space to hold water in the future. This is usually an irreversible process.

U of H researchers found that population growth in the suburbs has led to excessive groundwater extraction in those areas.

Khan said that similar subsidence issues were found in downtown Houston and suburbs to the southeast of the city in previous years, but groundwater regulation has slowed the sinking to levels that are no longer substantial.

According to Khan, subsidence in Mont Belvieu appears to be related to the heavy withdrawal of oil and natural gas reserves in that area.

Researchers said that all the underground movement could not only lead to sinking ground, but also increase risks of flooding and shaking in some areas.

According to the study, the additional weight of floodwaters on subsided areas can further compress the sediments underground and potentially lead to even more subsidence. Researchers warned that flood-induced subsidence could increase as climate change raises the likelihood of wetter storms.

The study also found that sinking ground may also be causing once-dormant faults to move again.

"If current ground pumping trends continue, faults in Katy and The Woodlands will likely become reactivated and increase in activity over time," researchers wrote in the study.

Officials at a conservation district charged with managing groundwater in Montgomery County, home to The Woodlands, said they take issue with how some data in the UH study was interpreted and are beginning the third phase of a study aimed at better understanding aquifer compaction in the county.

The following is the statement from the Lone Star Groundwater Conservation District that was sent to FOX Weather:

"As the entity charged with managing groundwater for Montgomery County, the Lone Star Groundwater Conservation District (Lone Star) understands the importance of monitoring subsidence in the region. The recent University of Houston subsidence study (by Kahn and others) (U of H study) points out the importance of additional research and monitoring to fully understand the factors contributing to subsidence, including oil and gas pumping, groundwater withdrawal, flooding and faults.  Lone Star has been actively working on this research specific to Montgomery County for some time.

"Lone Star recently completed Phase 2 of our subsidence study, which resulted in several questions surrounding subsidence in the region and more precisely, which aquifers are compacting in Montgomery County.  We are moving ahead with Phase 3 of the study, which involves collecting downhole samples of geologic aquifer material to more directly assess compaction within individual aquifers. The samples collected during the Phase 3 work will be similar to the samples collected almost fifty years ago when USGS started studying compaction in the Houston/Galveston area. Phase 3 will obtain critical and unique data in Montgomery County that has never been collected before.

"The U of H study, as well as all other subsidence estimates to date in Montgomery County, are limited because they are based only on GPS and satellite data (e.g., InSAR). This study does not display positive displacement data, which would indicate an increase in ground surfaces or no subsidence.  Evaluation of positive displacement data helps validate the mathematical models used to process the InSAR data, and excluding this information makes it difficult to validate the mathematical models. GPS and satellite data only consider land surface elevation changes and by contrast, Phase 3 Study will provide direct estimates of compaction within each aquifer. This compaction data for specific aquifers in Montgomery County is critical because it allows Lone Star to manage based on which aquifers are compacting and at what rate.

"Additionally, the U of H study applies an unequal range of subsidence values on the map legend, skewing interpretation. Instead of equally distributing the compaction ranges, the maps apportion 70% of the range of compaction to the bright yellow color, which is misleading.

"The study misguides readers in how it presents data and maps, and the inaccurate reporting misleads the public and causes confusion. These inaccuracies suggest that the methods and conclusions of the study require additional scrutiny. Due to the readily observed errors in the study, readers should be cautious regarding conclusions and these errors further accentuate the need for Lone Star’s Phase 3 subsidence study. There are also statistical discrepancies with data from the Harris-Galveston Subsidence District.

"We are asking for the support of other governmental entities in Montgomery County as we explore new data and monitoring opportunities. We hope they also recognize the importance of this work so that we can move forward with Phase 3 and effectively manage groundwater for future generations."