MINNEAPOLIS - Following the sentencing of former Minneapolis police Officer Derek Chauvin for the murder of George Floyd, Rev. Al Sharpton spoke out alongside the Floyd family’s attorney Ben Crump, noting that the sentence of more than two decades exceeded their expectations, but fell short of what the family felt was justice.

"This verdict and this sentencing is the longest sentence we’ve seen but it is not justice because George Floyd is in a grave tonight even though Chauvin will be in jail. So let us not feel we are here to celebrate because justice would have been George Floyd never having been killed," Sharpton said.

"Justice would have been the maximum. We got more than we thought only because we have been disappointed so many times before," Sharpton said.

"Twenty-two and a half years is longer than we’ve ever gotten but shorter than what we should have gotten in the past. Let us remember, a man lost his life. This is not a prayer of celebration, it’s a prayer to thank God for giving this strength that is family and those activists that stayed in the streets to make sure that this court had to do what was right," Sharpton said. 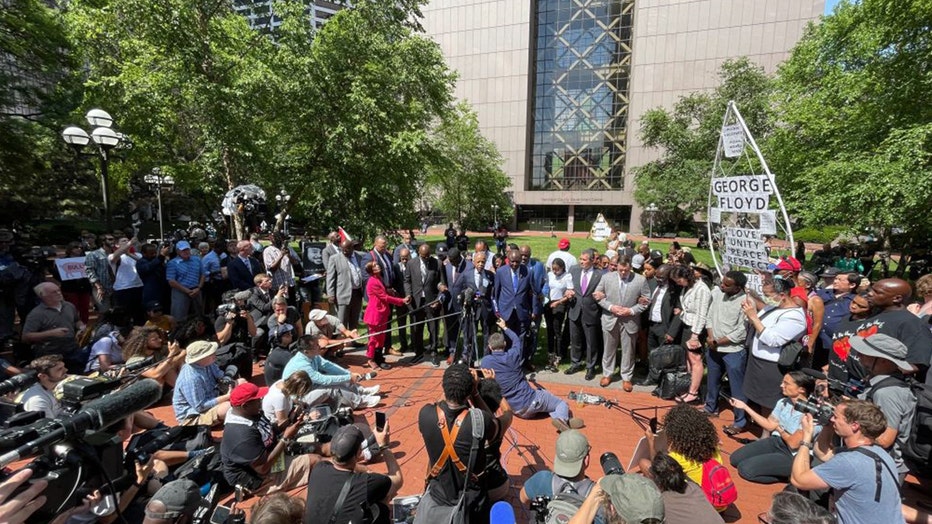 Crump said the sentence represented the opportunity for a "turning point" in America.

"We want to acknowledge all of the people who used their voice to say his name," Crump said, to which a crowd shouted, "George Floyd."

"This is the longest sentence that a police officer has ever been sentenced to in the history of the state of Minnesota. But this should not be the exception where a Black person is killed by brutality by police, it should be the norm. So when we think about real justice, real justice would be George Floyd would still be here with his family," Crump said.

"So what we got today was some measure of accountability and we understand there’s still federal charges pending. So as his brothers and his family asks for the maximum, we’re still holding out for the maximum," Crump said.

Derek Chauvin sentenced to 22.5 years in prison I NewsNOW from FOX

Judge Peter Cahill sentenced former Minneapolis police officer Derek Chauvin to 22.5 years in prison for the murder of George Floyd. Chauvin will get credit for 199 days served in prison.

RELATED: George Floyd's brother to Chauvin: Why? What were you thinking?

In April, a Hennepin County jury found Chauvin guilty of all three counts he was facing for his role in Floyd’s death: second-degree murder, third-degree murder and second-degree manslaughter. However, Chauvin was only sentenced on the most serious of those charges, second-degree unintentional murder. Chauvin's sentence is an upward departure from the presumptive sentence of 150 months, or 12 1/2 years, in prison that charge carries.

"What the sentence is not based on is emotion or sympathy, but at the same time I want to acknowledge the deep and tremendous pain that all the families are feeling, especially the Floyd family," Hennepin County Judge Peter Cahill said before handing down the sentence. "You have our sympathies."

Floyd’s death sparked conversations about race and policing nationwide. As a result, the Justice Department has launched a sweeping civil investigation into the patterns and practices of the Minneapolis Police Department.

The Associated Press and Fox 9 contributed to this report.