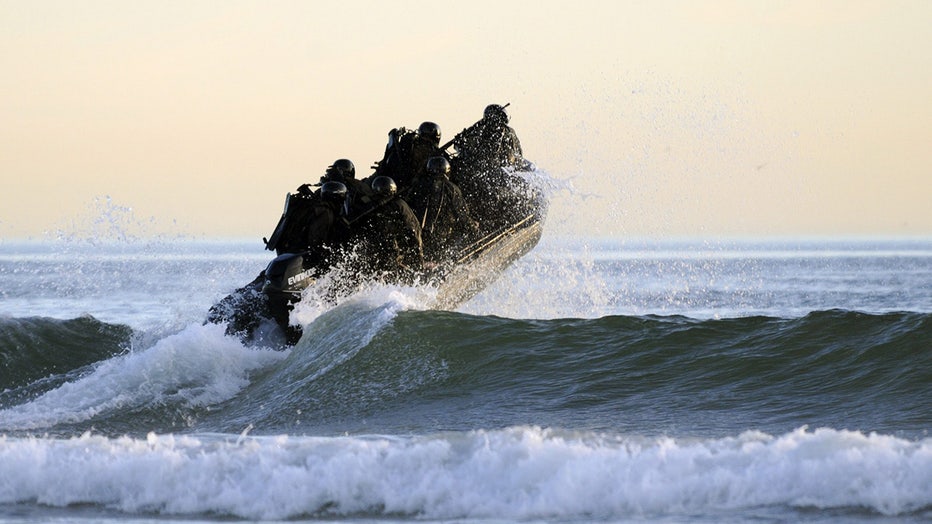 In this handout provided by the U.S. Navy, Students in Sea Air and Land (SEAL) qualification training navigate the surf off the cost of Coronado during a maritime operations training exercise October 28, 2010 in Coronado, California. (Photo by Blake

"We are all heartbroken to hear of Kyle’s passing. He was an outstanding young man whose dedication to serving our country was commendable. Our thoughts and prayers go out to all of Kyle’s family and friends during this difficult time," Superintendent Dr. Charles Sampson told Fox News in a statement.

Manalapan High School in New Jersey had a moment of silence Monday, and counseling services are available to students and staff in need. Mullen will be honored at the upcoming football banquet, a spokeswoman said. The school is also looking into having the football team wear Mullen’s number on their helmets next season and retiring his number.

Mullen died at a San Diego area hospital on Friday after he and another SEAL trainee reported experiencing symptoms of an unknown illness, the Navy said.

The other sailor, whose name has not been released, was hospitalized in stable condition, the San Diego Union-Tribune reported Sunday.

The cause of death is unknown and under investigation. Both men fell ill just hours after they successfully completed the test that ends the first phase of assessment and selection for the elite Basic Underwater Demolition/SEAL (BUD/S) class.

The Navy said neither one had experienced an accident or unusual incident during the five-and-a-half-day Hell Week.

Mullen joined the Navy in March 2021, according to his Navy biography. He reported to SEAL training in Coronado in July, the Union-Tribune said.

Mullen was a former football star at Manalapan High School who later played at Yale and Monmouth University, according to the Asbury Park Press.