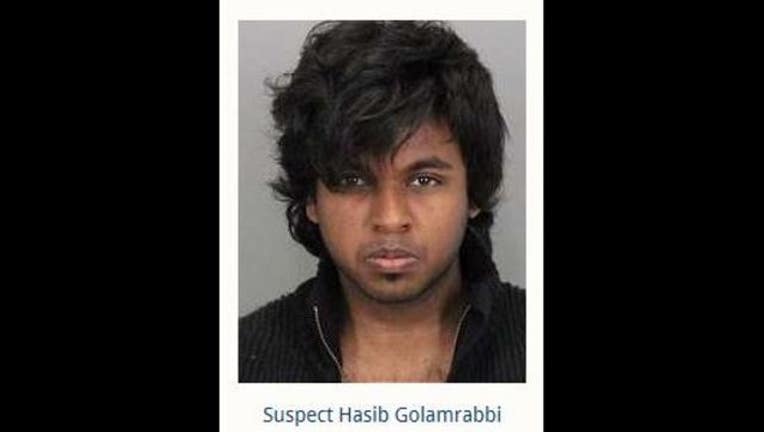 SAN JOSE, Calif. (AP) — The older of two sons charged with murdering their parents at their home in California said he shot his father multiple times, but he did not shoot his mother, according to police.

Guire said Golamrabbi's younger brother, Omar, told investigators that Hasib Golamrabbi killed both parents, and then asked him to check the garage where his father was killed to make sure no blood was seeping out before the two drove off to an anime convention in Oakland. The younger brother did not mention a stranger, according to Guire.

The police statement did not include a motive.

The brothers were arraigned on two counts of murder each in the slayings of their parents, father Golam Rabbi and mother Shamima Rabbi. The parents had emigrated from Bangladesh decades ago.

Omar Golamrabbi is 17, but he was charged as an adult.

The parents were shot to death on Saturday at their San Jose home.

Relatives spoke to the brothers on Sunday, requesting they come home because their parents were not responding to phone calls or knocks on the door, Guire said.

But then the brothers stopped answering their phones. Relatives went to the home and discovered the bodies, Guire said.

Hasib Golamrabbi told the San Francisco Chronicle in a jailhouse interview that he is eager to tell the real story but offered no other details. He emphasized that his brother is innocent.

"I want everyone to know what happened," he said, "but I can't say anything without a lawyer."

It was not immediately known who their attorneys were.

Guire said police found writing on the walls of the home, one set of which was consistent with Omar Golamrabbi's writing that investigators found in a notebook.

Alexis Quinones, a longtime friend and classmate of Omar Golamrabbi, said she believes he is innocent.

"I know Omar didn't do anything," she said in an email to the San Jose Mercury News. "He always respected people, and was never a hurtful person, and a real pacifist."

The double slaying and the arrest of the sons have horrified the tight-knit Muslim community.

Hundreds of people attended a prayer service that included a special funeral prayer for the parents Friday afternoon at the Muslim Community Association in Santa Clara.

Guest speaker Shaykh Yaser Birjas told the crowd that "forgiveness is the most powerful thing you have" and urged worshippers to make sure parents and children communicate, the Mercury News reported.

The victims were popular fixtures at their mosque for three decades and had helped relatives emigrate from their native Bangladesh. Golam Rabbi was an engineer. His wife was an accountant.

"This is one of those tragedies nobody ever wants to be in," mosque spokesman Faisal Yazadi said. "All we can do is pray."