Pasadena police shoot, kill man who was waving a gun

We take a look at what police and witnesses have to say after a man was killed by Pasadena police for waving a gun at officers.

PASADENA, Texas - A suspect is dead after being shot by Pasadena police officers on Spencer Highway Tuesday morning.

Pasadena Police say they received a call around 10:15 a.m. about a man walking down the street by Hartz Chicken with a handgun and "pointing it in the air in different directions."

Chief Josh Bruegger says two officers responded within two minutes of the call and found the suspect walking on the sidewalk with a gun in his hand near the intersection of Strawberry and Spencer.

"He began running, and the officers were following him in the patrol car," the chief said. "One of them was giving him instructions over the PA in the vehicle to drop the gun."

Chief Bruegger says they gave him multiple instructions, but the suspect walked into the middle of the roadway with cars driving by and people outside.

That's when the suspect, described as a Black man in his early 20s, turned and started walking toward the officers who were following him, the chief said.

"Both officers discharged their weapons, struck the suspect," Bruegger said. "He was pronounced deceased here in the roadway." 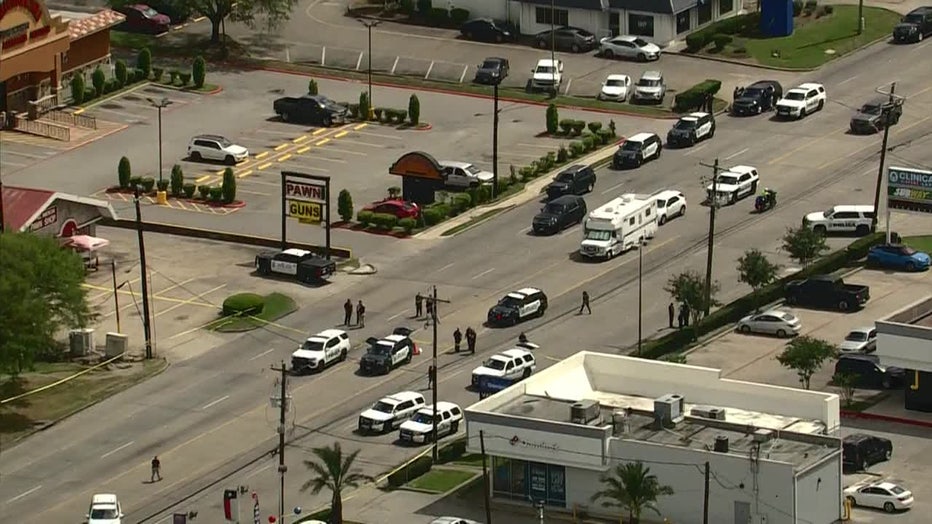 "It was scary," said Diana, a woman who lives just feet from where bullets were fired.

Several witnesses recorded video of the man running down the road between vehicles with his gun, and the deadly shooting.

"I could hear them saying, ‘Stop! Drop the gun,’" witness Ariana De Leon said. But as you can see in video De Leon recorded, and dashcam video released by Pasadena Police just hours later, the man with the gun in his hand started running down Spencer Highway instead.

"That’s when I saw the young man walking toward the apartments, but then he turned and started waving the gun." De Leon says.

FOX 26 obtained a video of the shooting captured by De Leon, which shows the moment the man turns toward officers pointing his gun. (You can watch the two videos below.)

A man who was waving his gun while walking down Spencer Highway was shot and killed by Pasadena police officers. A witness recorded this video of the moment the man was running down the road and turned to point the gun at officers before he was shot. (Video courtesy: Ariana De Leon)

The Pasadena Police Chief couldn’t immediately confirm if the man fired shots, but in the videos, it appears he does.

"It’s sad because I have a 22-year-old of my own. I know the young community is going through a lot. So we don’t know what he could have been going through," De Leon added.

MORE: Man shot dead while in car with friends outside Cypress residence

Chief Bruegger says one officer fired from within his patrol vehicle, leaving a bullet hole in the squad car. The other officer from outside his vehicle.

Seconds later, the man with the gun was laying dead in the street. "Everything just kind of got quiet after that," Diana recalls.

It’s an ordeal that has left those who witnessed it, the young man’s loved ones, and even officers devastated.

Chief Bruegger added that both officers are shaken up.

"It's traumatic to take another life no matter what the circumstances are," the chief said. "Even if your own life's in danger, it's still gonna be very traumatic."

Because of the psychological trauma, the officers are on administrative leave for the next five days, as is standard policy.

So who was this man, what was he doing, where was he going, and coming from? That's all still under investigation.