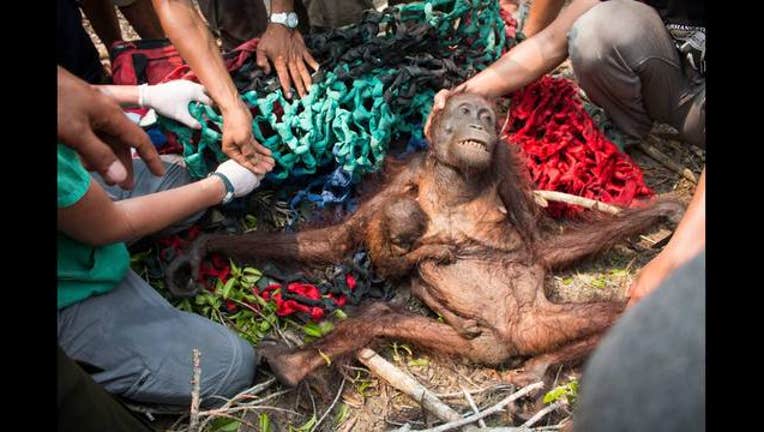 A photo of an endangered orangutan and her baby after they survived forest fires and stoning by villagers in Indonesia has gone viral, racking up more than 18,000 shares on Facebook. The harrowing photo shows the mother orangutan, dubbed Mama Anti, and her tiny baby being rescued by a team from the organization International Animal Rescue (IAR). The orangutans had been forced out of their forest homes by fires and ended up in a village, according to a statement released by IAR. Frightened villagers threw things at the mother and attempted to capture her and tie her up.

The plight of this orangutan is emblamatic of a species that has seen its numbers drop 50 percent over the past 60 years, according to the International Union for Conservation of Nature, mostly due to rampant illegal logging and the conversion of tropical forests to palm oil plantations.

Fortunately rescuers reached the pair just in time and quickly anaesthetized the mother with her frightened baby clinging to her.  “The adult female was extremely thin but still had milk to nourish the baby,” explained IAR. “She had some minor skin wounds and the team removed rope that was tied around her wrist.”

The rescue team checked the mother over and gave her treatment that included intravenous fluids. As the mother recovered from sedation, the pair were transported to a conservation area, where their progress is being monitored. Both are said to be adapting well to their new environment. A video released by International Animal Rescue shows the animals’ release from their transport cage. In a happy ending, the mother, carrying her baby, immediately climbs a tree and starts to forage.