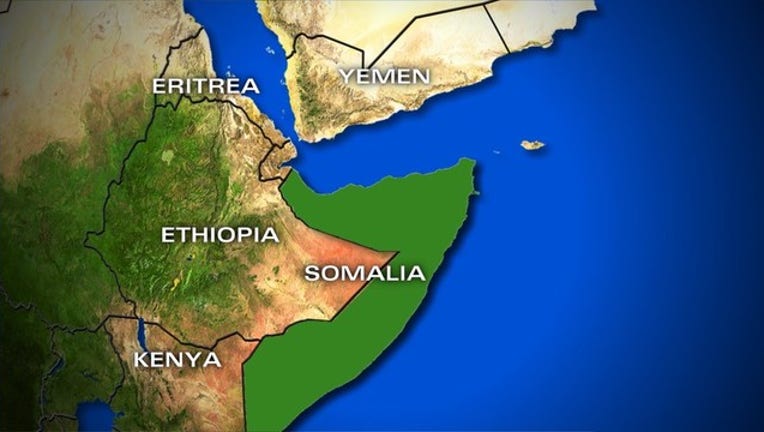 MOGADISHU, Somalia (AP) - Blood spattered utensils, bullet-pocked walls and overturned chairs mark the reception area of a prominent hotel in the Somali capital following an attack by Islamic extremists that killed at least 24, including six attackers.

Somali special forces stood over three bloodied bodies of the alleged attackers after officials declared they have full control of the Maka Al-Mukarramah Hotel Saturday, more than 12 hours after gunmen, believed to be six in number, from the Islamic rebel group al-Shabab stormed into the hotel.

The gunfire has stopped and security agents have gone through the whole building, said senior police officer Capt. Mohamed Hussein. He had earlier said the gunmen were believed to have occupied the third and fourth floors of the hotel in the capital Mogadishu.

"The operation has ended. We have taken full control of the hotel," Hussein said.

Eighteen people were killed in the attack, including one solider, said Hussein. At least 28 were wounded, according to Hussein Ali, an official of Mogadishu's ambulance service.

Al-Shabab claimed some of the gunmen involved in the attack escaped, in a statement released Saturday. The group vowed to carry out more attacks.

Somalia's ambassador to Switzerland and Permanent Representative to the United Nations Office in Geneva, Yusuf Bari-Bari was among those killed in the attack, said Somali President Hassan Sheikh Mohamud.

Al-Shabab, an al-Qaida-linked Islamic extremist group that has carried out many attacks in Somalia, claimed responsibility for the assault on the hotel, which is popular with Somali government officials and foreigners.

Al-Shabab controlled much of Mogadishu between 2007 and 2011, but was pushed out of Somalia's capital and other major cities by African Union forces.

The attack started around 4 p.m. Friday when a suicide bomber detonated his explosives-laden car at the gate of the hotel. Gunmen then quickly moved in.

Hours later, the militants were still holed up in the hotel's dark corridors and rooms. Sporadic gunfire could be heard, but it appeared that the security forces waited until daybreak before trying again to dislodge the militants.

The attack was condemned by the African Union mission to Somalia in which troops from several African countries support Somalia's weak government.

"Our message to the perpetrators of this inhuman act is, that their action will not dampen our spirit for the common good of Somalia, but will further strengthen us to work even harder to defeat the enemy of peace and development, with the aim of rebuilding a stronger and stable Somalia," said Ambassador Maman S. Sidikou, the African Union's representative in Somalia.

Despite major setbacks in 2014, al-Shabab continues to wage a deadly insurgency against Somalia's government and remains a threat in the East African region.

The group has carried out attacks in neighboring countries, including Kenya, whose military is part of the African Union troops bolstering Somalia's weak government from al-Shabab insurgency.

At least 67 people were killed in a September 2013 attack by al-Shabab on a mall in the Kenyan capital of Nairobi.