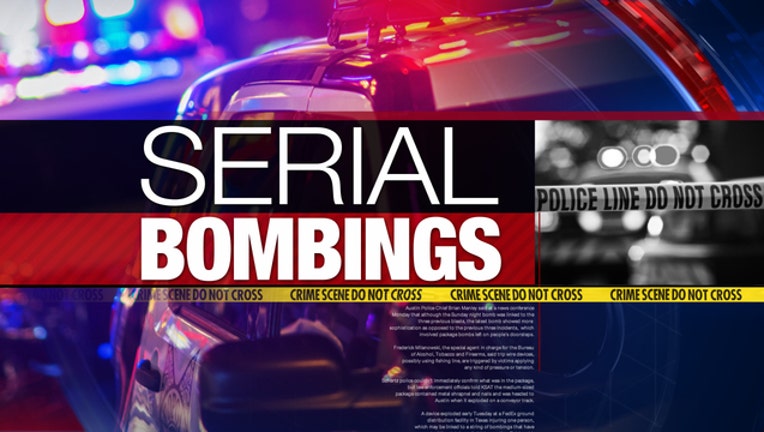 AUSTIN, Texas (AP) - The series of bombings this month in the Texas capital city of Austin and near San Antonio has generated a vast response by state and federal law enforcement agencies that are sifting through hundreds of tips to find what Austin police Chief Brian Manley has described as a serial bomber.

Here's a look at the investigation so far, by the numbers:

- 5: Number of explosions. Four explosions have been in Austin neighborhoods while the fifth explosion, which happened at a FedEx distribution center near San Antonio, has been linked to the Austin bombings.

- 2, 4: Number of people killed and the number badly wounded. The first explosion occurred March 2, killing a 39-year-old man. A 17-year-old boy was killed and two women were injured in two separate blasts on March 12. On Sunday, two men - ages 22 and 23 - were injured in a blast trigged by a tripwire. Separately, a worker at the FedEx distribution center was treated and released Tuesday morning after reporting ringing in her ears.

- At least 500: The number of leads as of Monday that have been closed since the bombings began, according to Fred Milanowski, special agent in charge of the Houston division of the Bureau of Alcohol, Tobacco, Firearms and Explosives.

- 500: Number federal agents, including FBI and ATF, currently involved in the investigation, according to Austin Police Chief Brian Manley in an update to city council members. Hundreds of other law enforcement personnel also are involved, including those with Austin police and surrounding municipalities.

- At least 240: Approximate number of interviews conducted as of Monday with witnesses, people calling in tips and others since the first explosion.

- 1,257: Calls that Austin police have responded to for suspicious packages since the second and third blasts happened March 12.