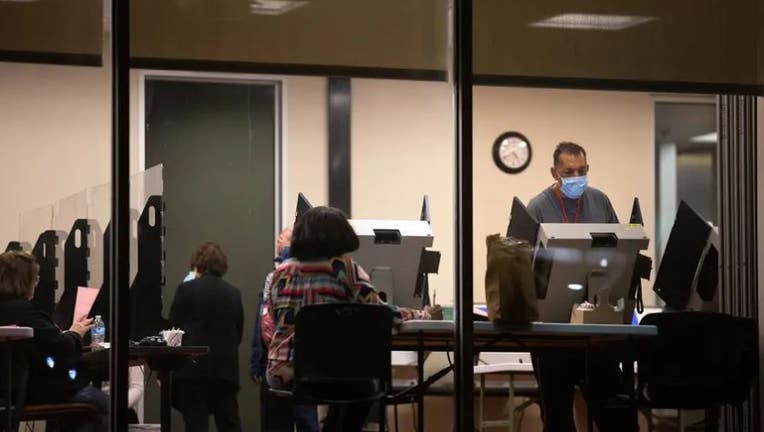 Voters cast their ballots at the Lochwood Branch Library in Dallas on Feb. 25, the last day of early voting in the Texas primary. Credit: Shelby Tauber for The Texas Tribune

Warnings to double-check early-voting ballots began spreading across social media this week as some Texas voters claimed that electronic voting machines had switched their votes from Democratic to Republican.

But this isn’t a case of grand conspiracy, malfeasance or rigged machines. Instead, election officials, security experts and voting rights advocates say some of the touch-sensitive screens on voting machines can be tricky to use, much like miscues while trying to use a smartphone. Midland County Election Administrator Carolyn Graves likened the experience to texting with a small keypad.

This isn’t the first election during which voters have been wary of voting machines. In 2018, Texas officials said voters were attempting to make their selections before machines could render and record their votes, causing similar concerns in the U.S. Senate race between Republican incumbent Ted Cruz and Democrat Beto O’Rourke.

"These issues have been showing up, in one form or another, since electronic voting machines were first introduced 20-plus years ago," said Dan Wallach, a computer science professor at Rice University and longtime election security researcher. "As far as we can tell, these are simply design issues with the machines."

So, what’s a voter to do? Election officials, security experts and voting rights advocates agree voters should carefully review their ballots to verify selections. If there is an error on a printed ballot, voters have the right to get up to two additional ballots to make corrections. The incorrect ballots are then spoiled and not counted.

Newer machines tend to have fewer touch-screen calibration problems, Wallach said, and many Texas counties have upgraded in recent years. But the machines still may not sit at an angle that makes them easy to use, especially since a voter’s height can affect their line of sight.

"If you're not looking absolutely straight at the screen … then you start getting this issue where the way that you see it and the way that it sees you are not the same thing," he said.

In such cases, voters should remain calm and try to shift their aim.

"You can correct it by figuring out that you need to aim higher or lower, as appropriate, in order to hit your target," Wallach said.

Several local county officials, a voting rights group and the secretary of state’s office all confirmed receiving a small number of reports of voters encountering issues with touch screens at the polls.

Cathy Broadrick, chair of the Midland County Democratic Party, said Thursday she had heard about 14 complaints. The Texas Civil Rights Project, which helps run a voter-protection hotline, had heard seven reports of similar issues by Thursday from voters in Bell, Bexar, Collin, Travis and Midland counties.

"It’s not switching their votes to somebody they didn’t vote for," said Sam Taylor, spokesperson for the secretary of state’s office. He said in some cases voters may "accidentally tap something right above the race that they’re currently voting on."

The reports make up a small fraction of the hundreds of thousands of Texans who had already voted early by Friday. One was Alicia Edwards, a 46-year-old who voted with her husband at the Midland County Centennial Library on Monday. She wanted to vote for Democratic candidates for statewide offices but had trouble making those selections on the county’s ballot-marking machine.

"I went to vote for Beto and the check mark showed up on Greg Abbott. And so I switched it back," she said. "I moved down to the next person. Same exact thing happened."

She carefully reviewed her ballot before printing and casting it, changing her votes back to Democratic candidates. When she later heard about others facing the same issue, she posted about her experience online, tweeting, "The TX GOP is up to the same dirty tricks."

Told by The Texas Tribune that she was dealing not with rigged elections but with sensitive touch screens, Edwards said officials should get different machines instead of blaming voters.

"It should be in their interest to make sure that Texas voters, that we have machines that work properly," she said, "that we don’t have to press four and five times to get our choice on the ballot."

She said she trusts the election process and poll workers but was left unsettled by the voting machines.

"I trust those people that they’re in there to do the right thing," she said. "It’s the machine."

Election Systems & Software spokesperson Katina Granger said that "there is no evidence of any so-called vote switching by equipment."

"Please note that voters are always able to check their printed paper ballots for accuracy before casting," Granger said in an email.

"These foreseeable problems on voting machines, that’s a machine error, not a user error to me," she said.

The election departments in Travis and Collin counties said they would create "an internal tech support ticket and look into the issue," Eby said, and Bell County promised to look into it. Bexar County said voters would have to tell poll workers "in the moment in order to get help," Eby said, and the organization had not yet heard back from Midland County on Thursday.

Bell County Elections Administrator Desi Roberts told the Tribune he visited polling sites and did not find any malfunctioning machines. He said the county was responding with more voter education to remind people to review their ballot choices.

In Midland, Graves, the elections administrator, said she had replaced one of the voting machines at the Midland County Centennial Library "for everybody to feel good" and made pencils available for voters to use the erasers as a stylus if they have trouble with the touch screen.

Lisa Wise, the elections administrator for El Paso County, told the Tribune she had not heard of any issues with the ExpressVote machines this year, but she did hear of some issues with the touch screens when the county started using that model in 2019. The county now provides voters with stylus pens, she said.

"What we tell voters is to make sure that you use the stylus we provide because we’ve had people who are, you know, trying to mark something and then like their bracelet hits the next [choice] or something like that," she said.

Trudy Hancock, the elections administrator for Brazos County, said in an email Wednesday that she had not heard of issues in her county, which uses Verity Duo ballot-marking machines from the company Hart InterCivic.

Hancock, who is also president of the Texas Association of Elections Administrators, said that "there are too many safeguards in place for the machine to switch votes."

Approved ballot-marking machines and other voting equipment, including ballot scanners known as tabulators, cannot have the capability to connect to the internet or other wireless devices, according to the secretary of state’s office. Only the devices used to check voter registration can connect to the internet.

Texas voting machines also go through multiple tests. They are tested twice before each election, including during a test held before the public, and once after the election to ensure there were no issues. The source code of the software is verified, and locks and seals are placed on the machines to prevent and detect any possible tampering.

"It's very difficult to get access to the machines and be able to program them that way, though the opportunity does exist," he said.

Studies have shown voting machines can be hacked, he said, which is why the organization advocates for the use of hand-marked paper ballots for most voters.

Election Systems & Software acknowledges these "staged demonstrations" on its website but says "these environments do not reflect an actual election scenario where multiple layers of physical and cyber security are always in place."

"Not everybody has the adequate sight or manual dexterity to be able to operate a paper ballot and a pen," said Wallach, the computer science professor at Rice University. "There’s a lot of things that a computer can do that a piece of paper cannot do."

And while voting machines have been hacked by researchers in controlled studies, there is"zero evidence of any election tampering" to date, Wallach said.

It’s important for voting machines to produce paper ballots, Wallach said, because that allows elections officials to audit elections. Texas does not require all voting machines to leave a paper trail, but most counties have shifted to machines that do, according to the secretary of state’s office. The state Legislature also passed a law last year that will make this a requirement by 2026.

"The ability to do a recount manually, whether you do it or not, the fact that you have the ability to do it helps mitigate against malware in tabulation software," Wallach said.

Disclosure: Rice University and the Texas secretary of state have been financial supporters of The Texas Tribune, a nonprofit, nonpartisan news organization that is funded in part by donations from members, foundations and corporate sponsors. Financial supporters play no role in the Tribune’s journalism. Find a complete list of them here.

The Texas Tribune is a member-supported, nonpartisan newsroom informing and engaging Texans on state politics and policy. Learn more at texastribune.org