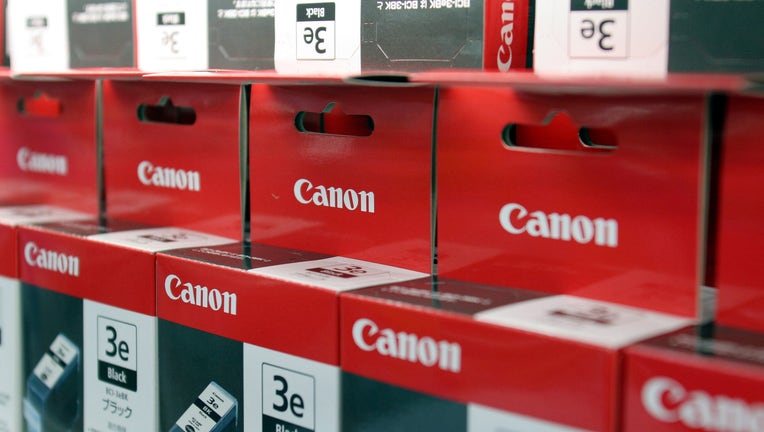 JAPAN - JULY 27: Canon Inc. printer ink cartridges sit on a shelf at an electronics store in Tokyo, Wednesday, July 27, 2005. The world's biggest maker of photocopiers said profit rose for a 12th quarter on sales of color laser printers and its more

NEW YORK - A Queens, New York man has filed a $5 million class-action lawsuit against Canon U.S.A. Inc., claiming the company's all-in-one printers are unable to scan documents if the ink cartridges are low.

David Leacraft filed the lawsuit Oct. 12 in the U.S. District Court for the Eastern District of New York.

Court documents show he bought a Canon PIXMA MG2522 All-in-One Printer at a local Walmart in March 2021 for scanning purposes, as advertised.

"After purchasing and using the device, he learned that the device does not function as a scanner if the ink cartridges are low or empty," the court documents said.

Court documents also alleged that Canon responded to similar complaints on a web forum saying "there is no workaround for this."

RELATED: Man sues psychic who allegedly promised to remove curse placed on him by ex-girlfriend for $5,100

Leacraft’s attorney, Mark Reich, said through its advertising, Canon promotes that its all-in-one printers can print, copy and scan. Reich contends that ink is not a necessary component to scan and that Canon deceptively "forces consumers to purchase ink cartridges whether or not they intend to use ink or want to print documents."

Leacraft is suing for breach of express warranty after claiming "Canon utilized false and deceptive product labels and advertising to promote the sale of All-in-One Printers by representing that the devices would function as scanners and fax machines under ordinary circumstances."

He’s also suing Canon for two counts of allegedly violating the New York general business law, claiming Canon "engaged in deceptive, unfair, and misleading acts and practices, which include, without limitation, failing to disclose that the All-in-One Printers were designed in such a way that made them unsuitable and unusable for their intended purpose."

Canon is also accused of "unjust enrichment" for obtaining revenues from consumers who had to buy ink cartridges to be able to scan documents, according to court documents.

FOX Television Stations has reached out to Canon for a comment.