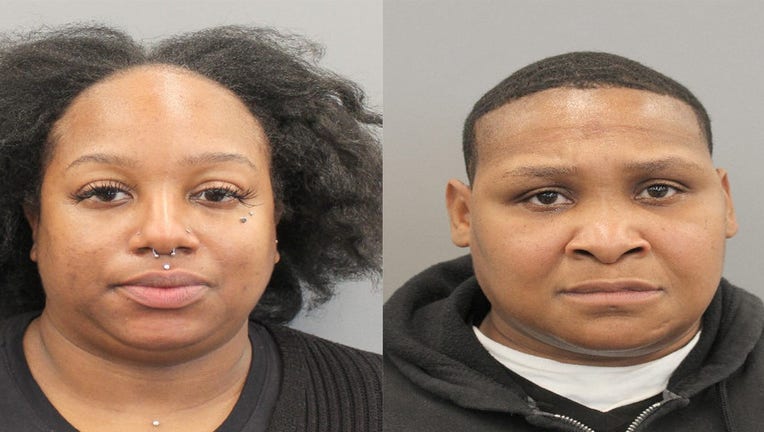 HOUSTON - A woman and her girlfriend have been charged in Harris County after allegedly abusing and neglecting four children.

Records say Dominique Francis, 30, and Lola Richards, 43, are faced with four charges each for Injury to Child under 15. Richards is also charged with Aggravated Assault - Family Member for threatening Francis with a knife.

According to court documents, Francis is the mother of the four children aged, 14, 10, 7, and 6 years old.

Francis allegedly hit a 6-year-old with a belt, umbrella, and cord, failed to protect the child from harm, and failed to provide adequate food and nutrition.

Medical records said the child had multiple "U-shaped, curvilinear and patterned markings and scars all over his body, including on his face, neck, chest, abdomen, back, and legs." These scars were said to be "substantial evidence of abuse."

When asked about the abuse, Francis said she thinks it was the grandmother who used to hit them with the belt.

Investigators also say the children said they would have to stand in a corner when they got home from school. The children only had a blanket on the floor where they slept.

The six-year-old told CPS that the only time Francis, his mother, let him and his siblings eat was when she had a good day. They would eat at home one time once a week sometimes, but most of the time they did not eat because Francis and Richards say they ate too much at school.

The child told officials that if they say they were hungry, they would be hit for being "ungrateful and disobedient" and would have to stand with their knees bent until bedtime.

The refrigerator in the home was chained up because Francis caught one of his siblings "stealing cereal." The child also says whenever Francis had a "bad day" she would beat the children and make them bend their knees. He says Richard would also whoop him and his siblings with a rope.

RELATED: Dad saves 4 children taken in vehicle by chasing them in stolen car left by suspect

Records state the child reported how Francis would beat them with a belt bucket. He says one time she made him and his siblings lay down on the floor on their stomachs and beat them with an umbrella until they cried and bled. She would also hit them with a phone charger cord.

A 14-year-old sister of the boy told investigators Francis would tell Richards to hit the children. Richards would hit the siblings on the back of their heads and push them. The young girl told officials one time Richards hit her 10-year-old brother so hard he started shaking and fell, hitting his head. She also said Francis would hit her with a broom.

They were afraid to say anything out of fear of what would happen, reports say.

Francis told CPS that the children were "ungrateful, disobedient, and do not bring anything to the table, that all they do is mess up and whine that they just want to eat food for free and want everything free."

Both Francis and Richards are being held in custody in Harris County on bond for $40,000.