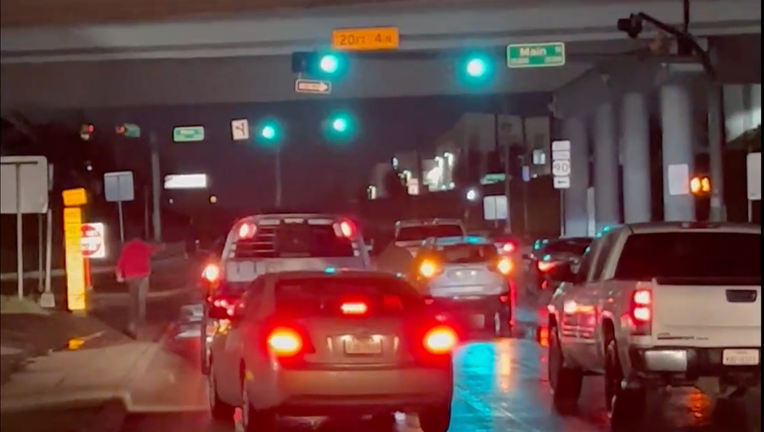 HOUSTON - A man was shot in the back after trying to drive away from a three-car crash that he caused, Houston Police say.

According to Lieutenant Pavel, officers were called to a shooting at S. Sam Houston Pkwy and Main St. at approximately 9:48 p.m. Monday.

When officers arrived, they found a man, believed to be in his early 40s, shot in the back of the shoulder.

He was immediately transported to the hospital, where he is expected to survive.

Lt. Pavel says the gunshot victim started a three-car crash by rear ending a gray Nissan Sentra, which in turn hit a blue Honda Accord.

According to the Harris County Pct. 4 Constable’s Office, the suspect and his passenger were injured in the crash, as well as the driver of the other vehicle who was not involved in the street race.

Police say the man tried to drive off from the scene in his Ford SUV, but was followed by the people in the Sentra until he stopped at a light.

That's when two people got out of the Sentra and started shooting at the man. Police say they fired six or seven shots before taking off.

The witness who reported the incident was in the blue Honda Accord. They recorded the shooting incident and provided it to police.

Anybody that has any information regarding the incident or the gray Nissan Sentra, is asked to call Crime Stoppers at (713) 222-(TIPS).

The Houston Police Department says a driver who got out of his car after a wrong-way crash on I-45 was then killed in a second crash with a driver who is being investigated for possible intoxication.