Men cause car fire in Phoenix after filling bags with gasoline

Phoenix detectives are investigating a car fire that put a man in the hospital with serious burns, and authorities say the men involved made up an elaborate lie to cover up what happened.

PHOENIX - A man was severely burned in a car fire in Phoenix after he and his friends attempted to carry plastic bags filled with gasoline police said on Thursday.

Officers responded to reports of a fiery crash near 35th Avenue and Ocotillo Road early that morning and discovered a vehicle actively burning with a man who had "significant burns to his body."

Firefighters took the man to the hospital in extremely critical condition. He was identified as a man in his 40s.

The registered owner of the vehicle was also nearby, and he had suffered minor burns.

"[The vehicle owner] provided a story stating his vehicle was stolen by an unknown man who burned him with an unknown object before taking his car," police said in a statement. "The owner’s friend witnessed the robbery and followed the stolen car in his vehicle. "

The owner then claimed that he followed the stolen car, only to discover that his vehicle was on fire and his friend had been seriously injured.

An investigation revealed inconsistencies in the story, and other witnesses told police that they saw a third man involved who did not match the description of the "robber."

"The detectives confronted the owner and he admitted to making up the story with his friends," police said. 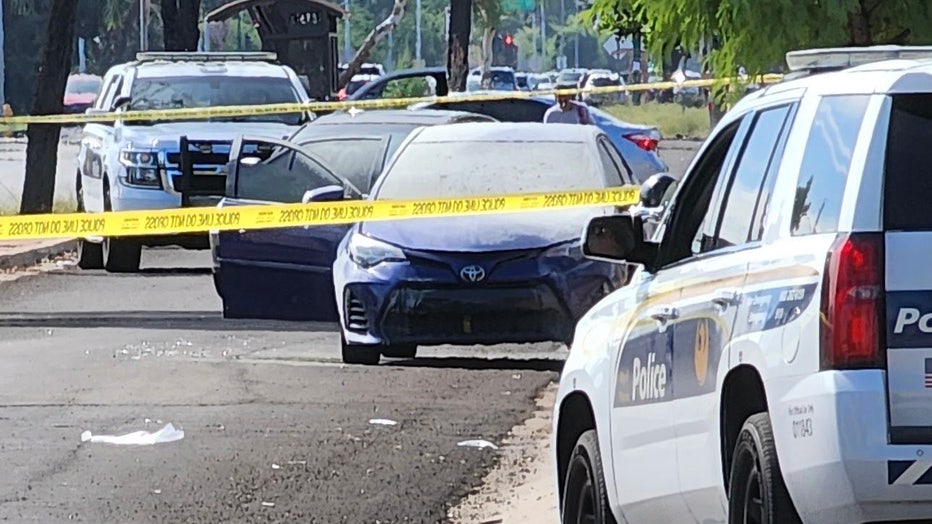 The scene of a car fire that left a man severely burned near 35th Avenue and Ocotillo. Police say a group of men had been carrying plastic bags filled with gasoline.

Police say the burn victim had asked the owner of the car and another friend to help him get gasoline after his vehicle ran out of fuel.

The men reportedly drove to the gas station and filled multiple heavy-duty plastic grocery bags with gasoline before picking up the victim from his house.

The trio then started driving to the location of the disabled car, but before they arrived, the gas inside the plastic bags ignited, causing their vehicle to catch fire.

It is unclear why the gasoline had sparked. The other two men did not need to be hospitalized.

The investigation is ongoing, and no arrests have been made.