Harris County Judge Lina Hidalgo claimed last August that she was uninvolved in the selection of a little known, one-woman firm for an $11 million COVID-19 communication contract. Financial documents recently obtained from the Harris County Auditor appear to shed new light on the real intent of the "outreach" contract.

HOUSTON - Harris County Judge Lina Hidalgo claimed last August that she was not involved in the selection of a little-known, one-woman firm for an $11 million COVID communication contract.

"I didn't know this person was being selected or even applying for it. Good luck showing any connection between me and a vendor, because I go to lengths to not have any," said Hidalgo.

However, a subsequent investigation by the Texas Rangers generated felony bid-rigging indictments aimed at Hidalgo's chief of staff and two other key aides.

While Hidalgo maintains neither she nor her staff did anything wrong, financial documents recently obtained from the Harris County Auditor by FOX 26 contributor Bill King shed new light on the real intent of the "outreach" contract.

Something of particular interest is the invoices from three highly focused software companies. 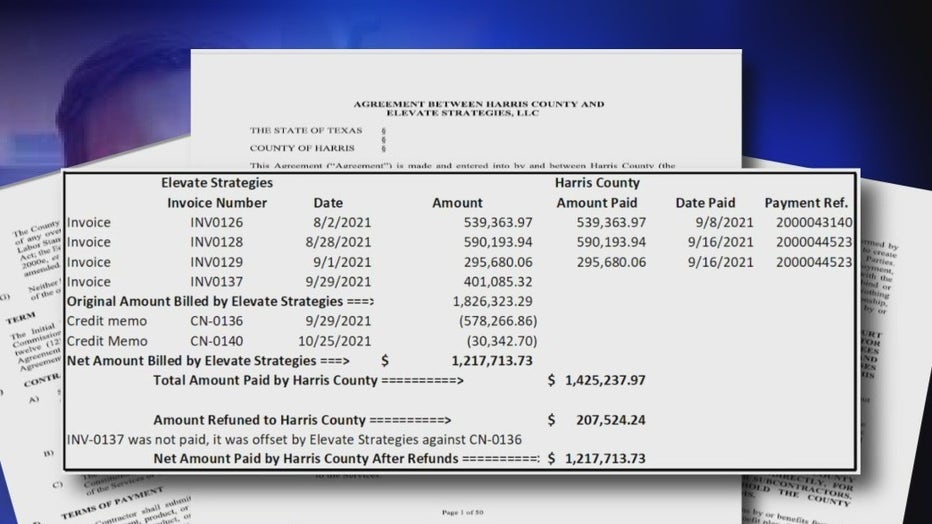 "They were spending a million dollars buying voter lists and likely voter lists from Democratic consulting firms which you don't use for COVID outreach, you use for mobilizing get-out-the-vote efforts for campaigns," said Jones.

EDITORS NOTE: This video is from a previous story.Could accusations of corruption and failure to contend with the crime wave cost Harris County judge Lina Hidalgo her job? Community activist Quanell X and attorney Charles 'Big Angry' Adams discuss/debate this in our ongoing series.

The records provided by the auditor indicate Harris County has recovered only $200,000 of the $1.4 million paid out before and after Hidalgo canceled the contract under heavy public pressure.

King says the entire scheme has left him "disgusted".

"We lost 11,000 people in Harris County to COVID. How many of those people would have been saved if we had spent this million dollars that we spent on this political software, if we had instead given that to El Centro de Corazon or to Legacy Health, or to any of these great public neighborhood clinics that we have and let them use that money to make sure the vaccines got out. How many lives did this particular contract cost in Harris County," said King.

TEXAS NEWS: How safe is Texas? Not very, according to a recent survey

"Judge Hidalgo ended pay-to-play in county contracting, and when the good ol’ boys who lost out couldn’t find a real scandal to attack her on, they made one up. They’ve been pushing these same stale lies ever since. Make no mistake though: that contract had nothing to do with politics; it was about saving lives. These late-hour attacks from partisans who’ve made it their mission to take down Lina Hidalgo have everything to do with politics."