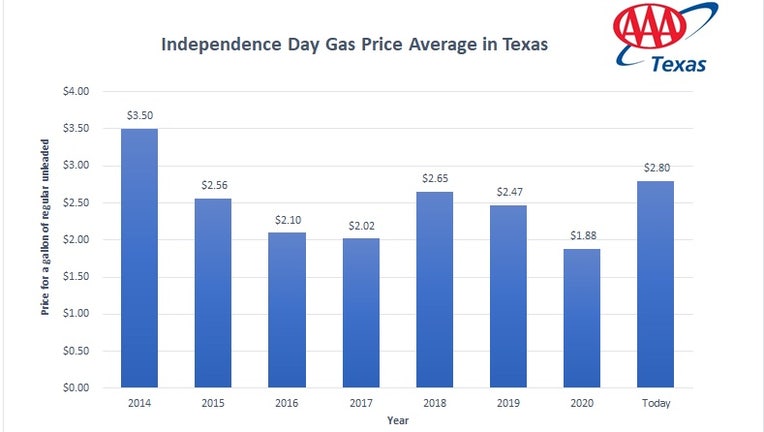 HOUSTON - If you're traveling this Fourth of July weekend, prepare to pay up at the pump.

The statewide gas price average in Texas is $2.80 for a gallon of regular unleaded fuel, according to the AAA Texas Weekend Gas Watch. That's five cents more than on this day last week and is 91 cents more per gallon compared to this day last year.

But it's still less than the national average, which is $3.12.

If you're driving through Amarillo, tank up there because they have the lowest prices at $2.70 per gallon. But if you've got to stop in El Paso or Odessa, expect the highest in the state with an average of $3.06.

Fireworks can cause a lot of anxiety for pets. Houston SPCA chief veterinarian Dr. Roberta Westbrook has some advice for owners and neighbors.

Roughly 3.7 million Texans are expected to travel during the Fourth of July holiday weekend, according to travel forecast data from AAA Texas.

The data also shows more Texans than ever will drive to their holiday destinations, about 3.3 million, which is a 41% jump from last year and a 10% increase from 2019.

Holiday travel is expected to be busy for this weekend's July 4th holiday. AAA estimates that pent-up travel demand will send more than 47 million Americans out and about this weekend, up 40% percent over last year. 9 out of 10 of those travelers will be driving, while a few million will fly, instead.

AAA Texas says the latest data from the Energy Information Administration shows "the U.S. gasoline demand decreased from the week prior by about 3%. Higher demand numbers are likely, however, as we head into the holiday weekend. Weekly regional fuel supply numbers stayed practically the same, and Gulf Coast refinery utilization registered flat from the week prior. Global market optimism for oil and gas demand has increased pump prices to the highest they’ve been in Texas for the Independence Day holiday in seven years."