Coronavirus: What you need to know

Here are the need to know details about this virus.

TOKYO (AP) - Japanese Prime Minister Shinzo Abe asked all elementary, middle and high schools nationwide on Thursday to close until late March to help control the spread of the new virus in the country.

The request caught many local officials by surprise. While not legally binding, it is expected to be largely followed. It will affect 12.8 million students at about 34,800 schools nationwide, according to the education ministry.

“The coming week or two is an extremely important time,” Abe said. “This is to prioritize the health and safety of the children and take precautions to avoid the risk of possible large-scale infections.”

The decision comes amid growing concern about the rise in the number of untraceable cases of the virus in northern Japan and elsewhere. Japan now has more than 910 cases, including 705 from a quarantined cruise ship. An eighth death from the virus was confirmed Thursday on the northern island of Hokkaido.

Abe's announcement came hours after several local governments had announced their own decisions to suspend classes for shorter periods. 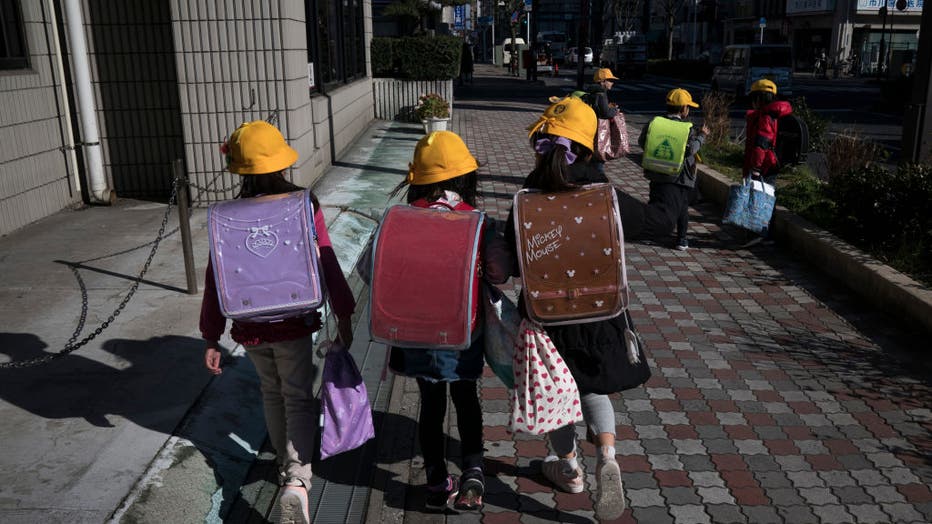 ICHIKAWA, JAPAN - FEBRUARY 27: Elementary school students make their way home on February 27, 2020 in Ichikawa, Japan. A growing number of events and sporting fixtures are being cancelled or postponed around Japan while some businesses are asking the

Officials in Hokkaido said they were closing all 1,600 elementary and middle schools. Hokkaido now has 54 confirmed cases, the largest in in the country outside the cruise ship.

Some local governments quickly said they will abide by the request, but others criticized the short notice and said it would affect working parents who need to find sitters for young school children.

“Society will fall apart because of the measures,” said Chiba Mayor Toshihito Kumagai, adding that he will come up with measures to support working parents during the school suspension.

Schools should keep exams and graduation ceremonies to minimum and take all necessary precautions, Abe said.

“Our graduation ceremony is coming up soon, and it's quite a hectic time of the year,” Norinobu Sawada, vice principal of Koizumi Elementary School in Hokkaido's Kitami City, told TBS television. “The most important thing is to prevent infections, so there aren't many other options.”

The Japanese government has also asked companies to allow employees to work flexible hours or work from home to reduce infection risks.