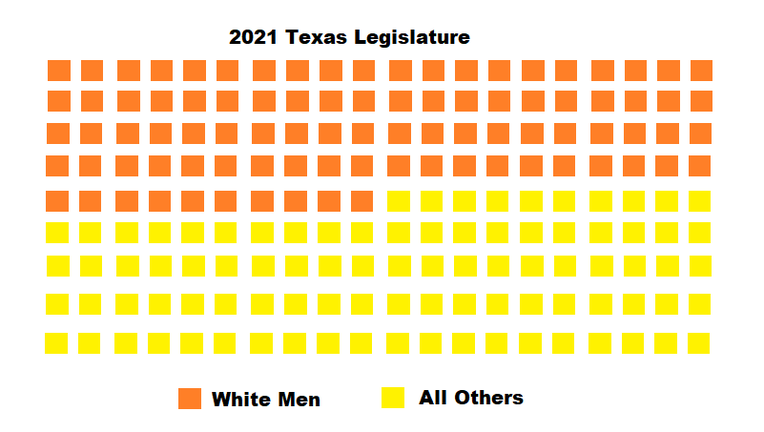 In a perennial takeaway of The Texas Tribune’s demographic analysis, the Texas Legislature remains mostly white and male.

When the 2021 legislative session begins Tuesday, 3 of every 5 lawmakers in the state House and Senate will be white, although white Texans make up just 41% of the state's population. That’s largely a function of the Republican dominance of the Capitol and the dearth of diversity in the party’s ranks. All but five of the 100 Republicans in the Legislature are non-Hispanic white people.

Women have seen gains in the Legislature in recent years, but their underrepresentation is underscored by how marginal those gains have been. Four years ago, women held just 20% of seats; on Tuesday they’ll take roughly 27%. And unlike at the start of the legislative session two years ago, there won’t be more lawmakers named "John" than Republican women in the House.

There will be an equal number.

*There are 181 total legislators but one seat is currently vacant. The Tribune was unable to confirm the racial identity of one lawmaker.

Women in the Texas Legislature

5,444 men have been elected to serve in the Legislature, and only 179 women have served. ( Source: Legislative Reference Library of Texas)

In its 175-year history, the state still has not elected enough women lawmakers to fill all 181 seats of just one legislative session. It moved closer with the newest class of lawmakers, bringing the all-time total of women who have served in the Legislature up to 179. But women are outnumbered by the 5,444 men who have served over the years.

Eleven women have actually been elected to the Legislature since the start of the last legislative session, but some were then replaced by other women. For example, Democrats Anna Eastman and Lorraine Birabil won House seats in special elections held in between sessions, but they subsequently lost reelection for full terms to Penny Morales Shaw of Houston and Jasmine Crockett of Dallas, respectively.

In another case, former state Rep. Sarah Davis, R-Houston, was defeated in her reelection bid by Democrat Ann Johnson. 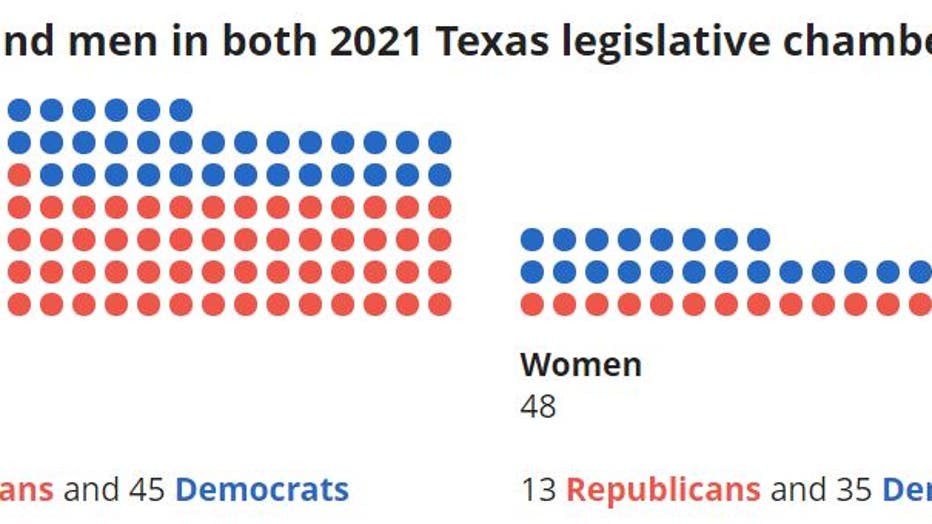 If the Legislature accurately reflected Texas, it would look like this: Men - 90   Women - 90

Note: The analysis is based on 180 members because one seat in the Texas House is currently vacant. ( Source: Texas Tribune survey of the Legislature, U.S. Census Bureau ACS 2019 estimates)

If the demographics of the Legislature were aligned with those of the state, there would be close to an equal number of Hispanic and non-Hispanic white lawmakers. Instead, there are more than twice as many white legislators as there are Hispanic legislators.

Hispanic Texans makeup 40% of the population but hold just a quarter of seats in the Legislature.

Representation is more lopsided when broken down by political party. Almost all Republicans in the Legislature are white. Notably, Democratic Sen-elect Roland Gutierrez’s defeat of Pete Flores — the first Hispanic Republican state senator, who won his seat in a 2018 special election upset — means every Republican in the Senate will be white this legislative session.

Meanwhile, more than half of the Democrats in the Legislature are Hispanic, and there are more Black Democrats than there are white.

The Texas Tribune is a nonprofit, nonpartisan media organization that informs Texans — and engages with them — about public policy, politics, government, and statewide issues.