Houston’s famous tiger, India, continues to progress after being recovered by police last year. The roughly 1-year-and-a-half-old big cat has grown from roughly 130 pounds to 250.

In May 2021, cell phone video showed India wandering through a West Houston neighborhood. The tiger was reported missing before being located a few days later and transported to the Cleveland Amory Black Beauty Ranch.

"We just like to take care of them," said Christi Gilbreth, a senior caregiver at Black Beauty Ranch. "[We] give them everything they need to live a long happy life, but most importantly [allow them] to be a tiger."

On Tuesday, Victor Cuevas was sentenced to 18 years in prison for a 2017 murder in Fort Bend County.

In 2021, Cuevas and his attorney insisted that the tiger didn’t belong to him. However, the 27-year-old shared videos of himself with India on social media showing the tiger rolling around on the floor and playing tug of war with Cuevas in a seemingly empty living room.

"Being in a house he probably wouldn’t have the muscle development he needed," said Gilbreth.  "I think he would have gotten a lot more agitated. He would have taken that out on his owner. I think we would have heard of a person being attacked by his tiger."

According to Gilbreth, India’s health has improved over the last year. The roughly 1-year-and-a-half-old tiger has grown from roughly 130 pounds to 250. 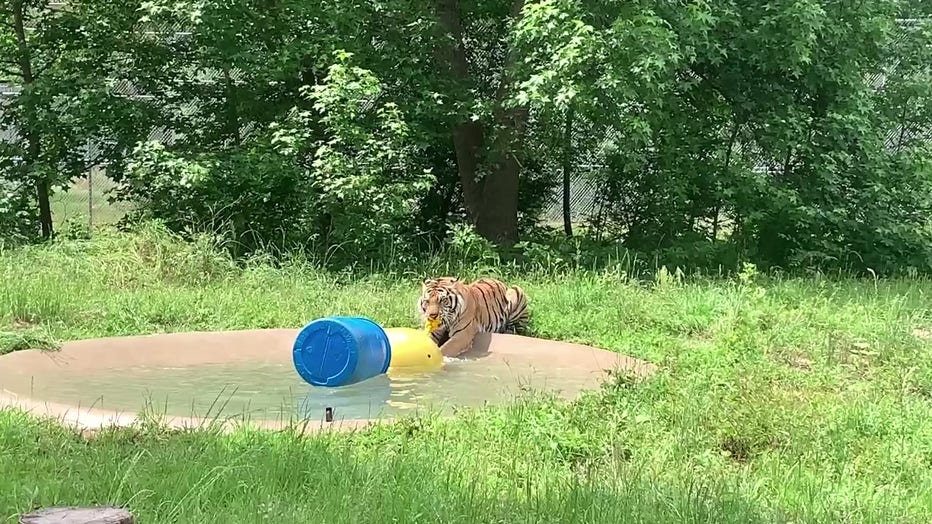 Gilbreth says tigers in the wild live to be between 8 and 10-years-old. However, in captivity, they can live to be more than 20.

RELATED: Convicted murderer, who's tied to India the tiger, sentenced to 18 years in prison

"He no longer has to entertain people," said Gilbreth. "He can actually be what his wild cousins are."