Group of Houston nurses traveled to New Orleans to help with the COVID-19 outbreak there, treating some of the most critical patients in ICU during the first two weeks of April

HOUSTON - Seven nurses from the VA hospital here in Houston volunteered to help out with the COVID-19 outbreak in New Orleans. They spent the first two weeks in April on the front lines, catering to some of the most critical patients in the ICU.

Dustin Ayres was one of the seven Houston nurses who volunteered at the Southeast Louisiana Veterans Healthcare System. Ayres left on March 28 and returned April 12. After quarantining for two weeks and testing negative for COVID-19, Monday was his first day back at work at the Michael E. DeBakey VA Center in Houston.

"I don't think I was fully prepared for what I walked into," Ayres said.

When Houston ICU nurse Dustin Ayres volunteered to help treat the massive coronavirus outbreak at the VA hospital in New Orleans, he never expected how chaotic and emotionally taxing the job would be. 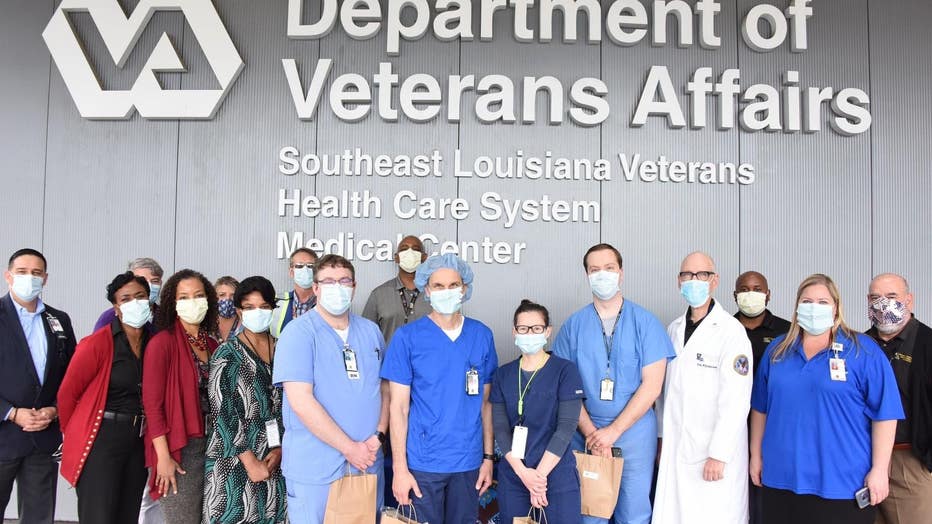 From temperature and symptom checks at the entrance to the layering of PPE from head to toe -- the routine was no different than the process at the Houston VA hospital -- but rather, it was the sheer number of critically, sick patients he treated in a short time-span.

"Every single patient on the ICU was on a ventilator. Everyone was experiencing multi-organ failure. It seemed like no matter what we were doing, what interventions we were doing, nobody was getting better," Ayres said.

Ayres said the ICU was expanded to make room for the influx of new admissions. He watched in horror as multiple COVID-19 patients died -- their bodies not responding positively to life-sustaining measures or the anti-malaria drug, hydroxychloroquine. A month ago, Ayres said doctors prescribing the medication thought it was their best and only option.

The experience was traumatizing at times -- even for a registered nurse like Ayres, who's no stranger to serving on the front lines.

He served as a first sergeant in the army for 10.5 years and was deployed to Iraq three separate times. Ayres says being a nurse in the pandemic isn't that different from his time as a soldier at war.

"Minus the violence of war, it was very much like a war zone. There were alarms going off everywhere. Everybody had their purpose. Everybody was running around and it was that feeling of chaos that I've experienced before," Ayres said.

Although those feelings of hopelessness were overwhelming to deal with in that two-week period, Ayres said all it took was for one patient to defeat COVID-19 to know that his life-saving efforts were worth the sacrifice.

"The number one thing I will never forget is that patient saying thank you. Seeing him at his absolute sickest and then a week and a half later, him saying thank you. I will never ever forget that. The first week that I was there, it was very go-go-go. An exhausting 12 hour day. But the second week that I was there, you could tell that curve was starting to flatten a little bit. The admissions were not coming as fast. Patients were actually starting to come off the ventilator," Ayres said.

Ayres is a husband and father to three young kids.

Thank you, Dustin Ayres, and the six other Houston VA nurses that risked their lives to save our neighbors in New Orleans. Thank you to all our healthcare workers on the front lines for your selfless sacrifice to save lives every day.