A driver in a Mercedes with fake paper tags led authorities on a high-speed, multi-city, hour-and-a-half-long chase Monday afternoon.

DALLAS - A driver in a Mercedes with fake paper tags led authorities on a high-speed, multi-city, hour-and-a-half-long chase Monday afternoon.

It ended with the driver on top of a stranger's car after he was cornered by a police K9.

The chase started near Forney but weaved along parts of I-30 and 635 in Dallas, Garland, Mesquite and Rowlett.

At times, it was dangerous for other drivers. The suspect hopped fences and tried to hide in yards. Eventually, the cops caught up.

Kaufman County is not releasing the suspect’s name until charges are filed, only confirming the driver was born in 2003.

The chase spanned all over the east side of the metro, topping speeds of 100 miles per hour.

Monday afternoon, a multi-county police pursuit ended with the suspect surrendering in a North Dallas neighborhood.

A Monday afternoon chase made its way through Dallas and Mesquite before ending in a residential neighborhood.

It’s a neighborhood Charlie Hinton has called home for 40 years.

"I turned on YouTube and saw something about a chase," he said.

Hinton watched FOX 4’s live feed of the chase Monday while he was with family in Garland only to realize the roads and yards looked familiar, even slipping through the side of his hedges.

According to Kaufman County Constable Precinct Two, the chase began miles away in Forney around 1 p.m. A deputy noticed a fake paper tag on the black Mercedes.

The Mercedes refused to pull over for a traffic stop, leading to a pursuit through Sunnyvale and then Mesquite.

The Mercedes traveled I-635 to eastbound on I-30 towards Rowlett, weaving in and out of traffic and passing other cars on the shoulder.

A near-crash happened as the Mercedes made a U-turn and headed back on I-30 West.

DPS jumped in the chase when the driver hopped back on I-635.

Once he exited, the Mercedes was seen side-swiping a car at an intersection.

Law enforcement followed the Mercedes to Walnut Street and Plano Road in a North Dallas neighborhood close to the Garland border.

Marian Rangel’s brother took a video as the chase passed her house.

"It hit so close to home because it was right around the corner from my house," she said.

Soon after, the driver bailed out of the black Mercedes and began weaving in and out of alleyways on foot. 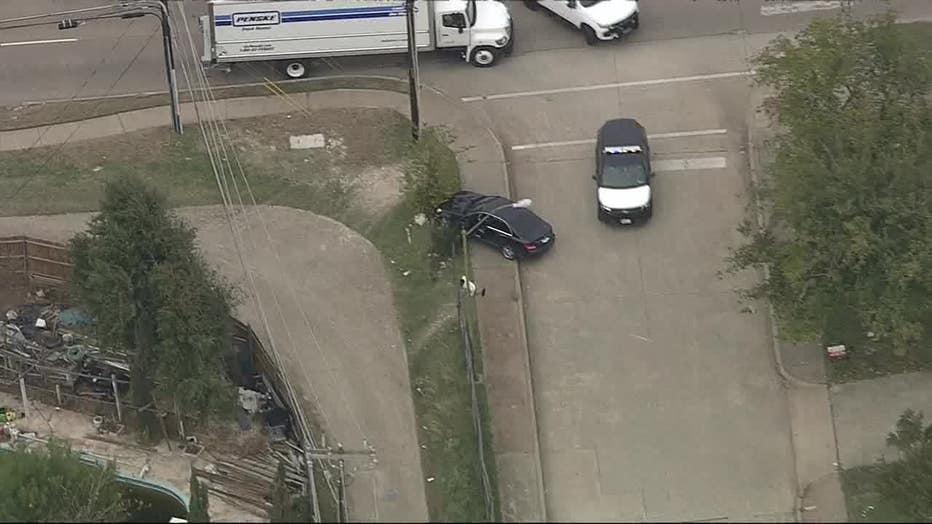 A Kaufman County deputy and the K9 were right behind him headed straight to Rangel’s aunt’s house on Black Hickory Road.

"I was able to see my aunt’s house in the back," Rangel said. "I was like oh my God. I am glad he didn’t jump to this side."

Rangel watched the suspect run up her aunt’s driveway and scale the fence into the neighbor’s back yard.

After scaling another fence, the suspect ended up on top of a silver sedan parked in the street to get away from the closing K-9. He surrendered to the police dog and officer and was taken into custody.

Watch as Mesquite police take down a suspect that ditched his car in a neighborhood after a high speed chase.

"So crazy how it was literally so close to us," Rangel said.

Deputies found fentanyl, marijuana, and ecstasy inside the Mercedes.

It’s still unclear belonged to the suspect or it was stolen.