GRIMES COUNTY, Texas - More than 150 people have been searching the woods for 3-year-old Christopher Ramirez who went missing Wednesday around 1:30 p.m. but the toddler’s mom says she believes someone has her son.

Thursday marks the second night a mother is going to sleep without her 3-year-old son, Christopher Ramirez. However, intense efforts to find the toddler remain underway. FOX 26’s Gabby Hart has more.

"She’s asking everybody to please help her find her baby," Sgt. Smith added. "It’s been a while and she wants her baby returned."

Nunez, her mom, and Christopher returned home from selling food in Magnolia and the adults were unloading the car around 1:30  p.m. Wednesday when Nunez says she realized it had been about two minutes since she last saw her 3-year-old.

Christopher Ramirez, 3, was said to have spotted a neighbor's dog and was playing with it, authorities say. Moments later, however, he was nowhere to be found.

The dog came back but the boy didn’t.

"We had a couple of bodies of water, small tanks, we checked those out," explains Grimes County Sheriff Don Sowell. "So far none of that produced anything thank goodness. We have no information of any form, fashion, or shape that there’s any foul play involved however it hasn’t been ruled out."

"You’ve got deer that come through here," "You got coyotes. You got timber rattlers, water moccasins."

"She thinks somebody has her son and is hiding him somewhere," Sgt. Smith translates for Mrs. Nunez.

The sheriff says the two registered sex offenders living in the area have been checked out, are being monitored, and right now are not considered persons of interest. 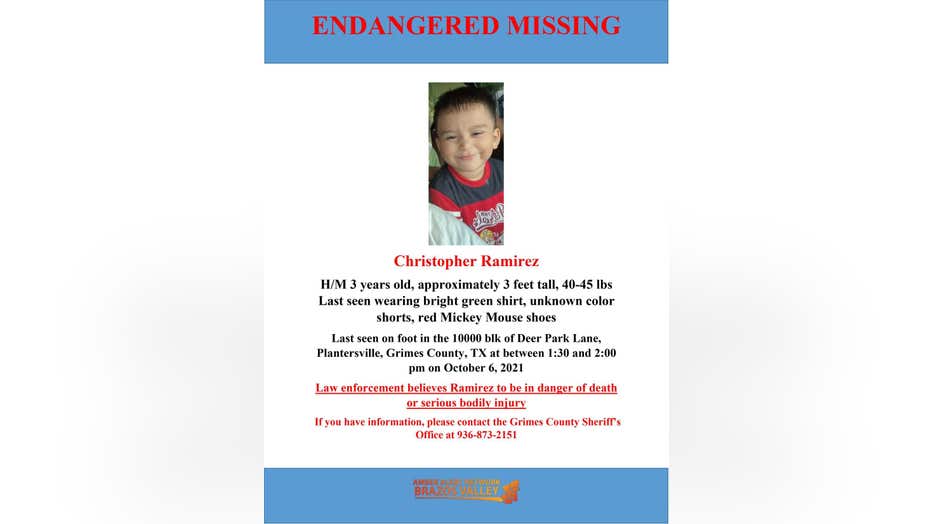 He also points out they thought they would hear the 3-year-old crying out by now especially last night when he was alone in the dark if he was lost in the woods but they still haven’t heard or seen any signs of the toddler, not even on surveillance cameras that several area residents have outside their homes.

"I’m just going to continue to be optimistic, hope for the best. I just don’t know. I hope nobody has abducted the child like the mother suspects," says Sheriff Sowell.

The sheriff also says there’s no evidence of problems within the family.

"To our knowledge, there are no domestic issues," he said. "The biological father lives in Mexico. The stepfather lives here. He was at work."

If you have any information about his whereabouts, you're encouraged to call the Grimes Co. Sheriff's Office at 936-873-2151.