Have you seen Austin Nimrod? Houston mom searching for her missing son

Along a drainage ditch near San Felipe and Briargrove in southwest Houston is just one spot loved ones have been searching for a sign of Austin Nimrod. This is because the day his mom, Valondra Nimrod reported Austin missing, his bag and jacket were found there.

The search is something Mrs. Nimrod says is heartbreaking to do and fears the worst.

"Something has happened to him," she said. "He wouldn’t go more than a week without calling his family."

"Then his girlfriend called me the next day and told me he was missing," she said.

SEE OUR ONGOING SERIES: THE MISSING

Now family, friends, and Texas EquuSearch volunteers are helping pass out fliers. Mrs. Nimrod also says she was told her son had gotten into an argument with a neighbor in the Southwest Houston Oyo Apartments at Heritage where he and his girlfriend live with a friend. 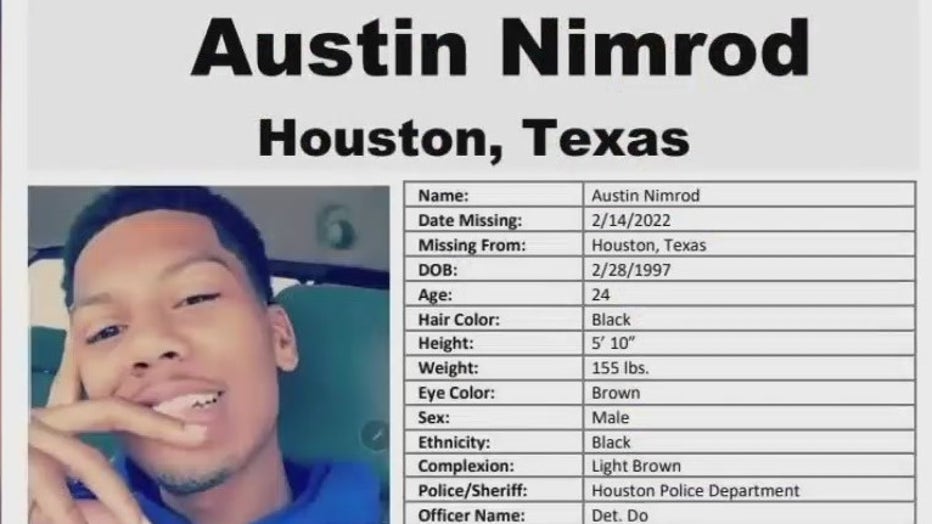 "The argument happened at a neighbor's house, but the police haven't been able to get in touch with the person he got into the fight with," she explained.

After she began looking for her son, Mrs. Nimrod says she found his jacket and a bag of his belongings about a mile from the complex along the banks of a drainage ditch near San Felipe.