A deputy with the Harris County Sheriff's Office has died after crashing into an 18-wheeler. A procession was held as his body was taken to medical examiners, where we heard from his father.

HARRIS COUNTY, Texas - A Harris County sheriff's deputy has died after a crash with an 18-wheeler on State Highway 249 near Spring Cypress on Wednesday afternoon.

The deputy was taken to the hospital in critical condition, where he later passed away from his injuries, Sheriff Ed Gonzalez says.

"Our hearts are broken as we announce the passing of our Deputy Robert Adam Howard, who succumbed to his injuries after a crash that occurred this afternoon," Sheriff Ed Gonzalez said in a news conference. "Our hearts are very heavy at this moment. We're devastated that we're losing such a great teammate, described as a workhorse described as having a great personality, funny, and just outgoing, a wonderful friend."

According to the sheriff, Dep. Howard was traveling northbound on 249 near Spring Cypress in his HCSO Chevrolet Tahoe SUV to drop off some evidence at a station.

There was an 18-wheeler, with around a 40,000-pound load, that was parked on the shoulder of the roadway but was not blocking a moving lane of traffic.

A procession for Harris County Deputy Robert Adam Howard, as he was taken to the Montgomery County Forensic Services Center in Conroe. The deputy was tragically killed in a crash with an 18-wheeler.

Investigators believe the deputy clipped the rear of the 18-wheeler.

"For unknown reasons, our deputy operating the vehicle veered slightly into the inside shoulder of 249, and unfortunately the front driver's side of our police Tahoe impacted the rear passenger side of the parked semi-trailer," said Lt. Simon Cheng with the Harris County Sheriff's Office Vehicular Crimes Division. "The deputy sustained serious injuries on scene. Unfortunately, his vehicle after hitting the semi-trailer also bounced into the second-from-inside lane and struck a Chevrolet Silverado."

There were reportedly four total vehicles involved in the crash.

"It was a pretty horrific impact," Sheriff Gonzalez said. "He eventually succumbed to his injuries."

27-year-old Deputy Howard was assigned to the HCSO Gang Unit. He had been part of the agency since August 2019. 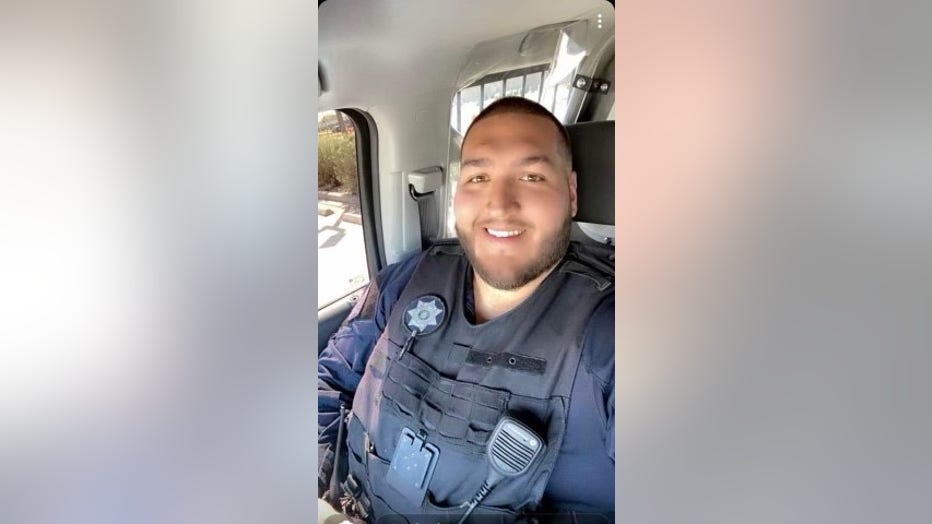 Deputy Howard, who grew up in Jersey Village, is survived by a wife and two young children, a 2-year-old girl and a 5-year-old boy.

"He leaves behind a wife, he leaves behind a mother and father, a sister, cousins, extended family and of course, his family in blue as well," the sheriff said. "I'm told that as he left his home earlier today to get to work, his last act was to play with his 2-year-old daughter and you know, just carrying her and embracing her."

Harris County Deputy injured in crash with truck on Hwy. 289

A Harris County sheriff's deputy is critically injured after a crash with an 18-wheeler on State Highway 249 near Spring Cypress on Wednesday afternoon.

During the escort of the deputy to the hospital, another HCSO deputy on a motorcycle was injured as they were blocking traffic.

Sheriff Ed Gonzales says both were taken to Memorial Hermann Hospital in The Woodlands.

All northbound lanes of State Highway 249 are currently shut down by emergency crews as they investigate the crash.

A piece of a Harris County Sheriff's Office SUV patrol unit is seen embedded into the back of an 18-wheeler on State Highway 249 near Spring Cypress.

SkyFOX was over the scene showing parts of the SUV smashed into the back of the trailer on the far-left lane. The rest of the HCSO SUV is seen on the far-right lane missing part of its left side and the roof ripped open.

Houston TranStar cameras show the scene of the crash with dozens of emergency vehicles on the scene and on both sides of the highway.

Shortly after crews cleaned up the scene, a procession was held to take Deputy Howard's body to Montgomery Co. Forensic Services, where his father spoke to the public and spoke admirably of his son.

Harris County sheriff's deputy Robert Howard passed away Wednesday after crashing into an 18-wheeler. His father delivered remarks at Montgomery Co. Forensic Services, where the deputy's body was taken following a procession.