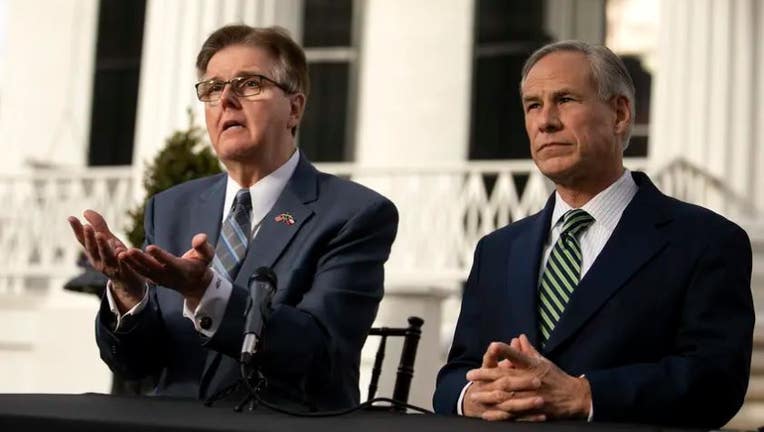 Gov. Greg Abbott and Lt. Gov. Dan Patrick at a joint press conference on the lawn of the Governor’s Mansion on Jan. 9, 2019. Credit: Miguel Gutierrez Jr. / The Texas Tribune.

The legislative session is more than a month away, but fault lines are already emerging between Texas’ top two Republican leaders on two major issues.

Both Gov. Greg Abbott and Lt. Gov. Dan Patrick want to use the state’s massive budget surplus to deliver property tax relief, but they appear split on how far to go — and how to pay for it. And in a starker contrast, Patrick has deemed it a top priority to continue fixing the power grid, while Abbott has declared the issue resolved.

"Everything that needed to be done was done to fix the power grid in Texas," Abbott famously said after the 2021 regular legislative session.

Patrick, by contrast, said Wednesday that making the grid more reliable was "the most important thing this session besides managing our money."

[Texas lawmakers have a $27 billion surplus, but a spending cap complicates their goal of lowering property taxes]

The dueling approaches are coming into focus as lawmakers prepare to return to Austin for the session, which begins Jan. 10. Patrick, who presides over the Senate with enormous influence, is coming back after a decisive reelection win. So is the governor, who will lay out his agenda in his State of the State speech during the opening weeks of the session.

FOX 26 Political Reporter Greg Groogan sat down with Jennifer Granholm, the nation’s energy secretary to get her take on the state's power grid and how the city can reduce its carbon footprint.

In his race against Democrat Beto O’Rourke, Abbott regularly promised voters on the campaign trail that he would use at least half of the state’s $27 billion surplus toward property tax relief.

On Wednesday, however, Patrick held a news conference at the Capitol where he began to outline his legislative priorities. It came shortly after the Legislative Budget Board, a panel of lawmakers led by Patrick and House Speaker Dade Phelan, voted to allow legislators to spend about $12.5 billion more in the next budget than last cycle — short of the amount Abbott has promised for property tax relief. To spend more, lawmakers would have to bust a constitutional spending cap, and Patrick said he opposed that, saying it "sets a very dangerous precedent."

At the press conference, Patrick cast doubt on the reality of spending half of the surplus on property taxes, but he suggested there could still be a path.

"I’ve heard some people say we should spend half the [surplus] money on [property tax relief], which would be about $13 billion, but that would bust the spending cap, unless we find some creative ways to do it, and I think we can," Patrick said. He declined to put a number on the size of any property tax cut but emphasized he wants it to be "robust," while also laying out a number of other priorities he would like to see funded.

The next day, the governor held firm on his promise.

"More than any other candidate, I campaigned prolifically and daily on saying we would use at least half of the surplus to give back to the people whose money it is in the first place," Abbott told reporters after an event in Houston, calling it the "most prolific way" to help taxpayers. "We’ll need to get into session to figure out which strategy is the best strategy to use, but the people who deserve that money are the taxpayers of the state of Texas."

It is unclear if Abbott supports busting the spending cap for property tax relief — a move that would require majorities in both chambers to vote to exceed the set cap for one budget cycle.

Abbott has not floated other ways to meet his campaign promise. Neither Abbott nor Patrick’s office responded to requests for comment.

State Sen. Paul Bettencourt, a Houston Republican who specializes in property tax issues and is one of the Senate’s staunchest advocates of property tax relief, downplayed the notion Abbott and Patrick were at odds.

"We’re still in the early stages of this, and right now … maybe it’s not a difference more than a distinction," Bettencourt said.

The tension is an extension of a general election, in which Abbott and Patrick ran different campaigns when it came to property taxes and the grid. Abbott vowed to deliver the biggest property tax cut in Texas history by returning at least half of the surplus to taxpayers. When the surplus was first revealed in July, Patrick pitched a more modest set of property tax proposals, including $4 billion in property tax relief and upping the homestead exemption to $60,000.

Patrick repeatedly said Wednesday he was concerned about using the surplus for property tax relief that is not sustainable, and he called raising the homestead exemption "something we can afford and maintain."

On the power grid, Abbott avoided the issue as much as possible in his campaign as his opponent blamed him for the blackouts in 2021 that left millions of Texans without power in a freezing winter storm. When he was asked about it over the past year, he exuded confidence. During his only debate with O’Rourke, Abbott said the grid was "more resilient and reliable than it’s ever been."

On the other hand, Patrick actively campaigned on his ongoing commitment to fixing the grid. He boasted about how he successfully demanded the resignation of Abbott’s appointees overseeing the grid and he plainly said there was more work to do in the next session.

Patrick said Wednesday he would fight hard during this session to ensure Texas builds more natural gas plants, which he argues will prevent another grid collapse like the one in 2021 that left millions without power.

"We can’t leave here next spring unless we have a plan for more natural gas power," Patrick said.

How reliable is the Texas power grid?

Energy industry expert Joe Brettell gives us a closer look at what the situation is with ERCOT.

Patrick’s news conference came a day after the head of the Electric Reliability Council of Texas warned that the grid is still vulnerable to extreme winter weather conditions. ERCOT and the Public Utility Commission, which regulates electricity infrastructure, are currently working to redesign the state’s power market, but a plan they released earlier this month has not gone over well in the Senate.

On Thursday, a bipartisan group of senators released a letter that effectively pumped the brakes on the plan, saying it does not "guarantee new dispatchable generation in a timely and cost-effective manner."

The PUC chair, Peter Lake, argued during a committee hearing Monday that the current plan would cause more natural gas power plants to be built. But amid lawmaker concerns that they would have enough time to make changes to the proposal, he suggested it was in limbo, saying the PUC did not plan to move forward with implementing the plan "until we receive guidance from the Legislature."

Abbott and Patrick make up two-thirds of what is known as the "Big 3," the other member being the state House speaker, Phelan. The Republican speaker has not been as aggressive in shaping pre-session expectations, but he has expressed caution about deploying the surplus for property tax relief in a way that cannot be sustained beyond this session.

The state's budget surplus is estimated at $27 billion and Phelan believes that number could rise to $30 billion soon after the legislature convenes in January.

During a speech last month in Houston, said he wants to see property tax relief but warned that the surplus will not be as big two years from now. Plus, "no one’s even considering how much more expensive it is gonna to be to run government next cycle," he said, referring to increased costs that the Texas Department of Transportation is facing due to inflation.

Phelan has generally been seen as more aligned with Abbott on grid issues, if only because he has not been outspoken on it since the last time the Legislature met.

Phelan’s office did not respond to a request for comment.

Erin Douglas contributed to this report.