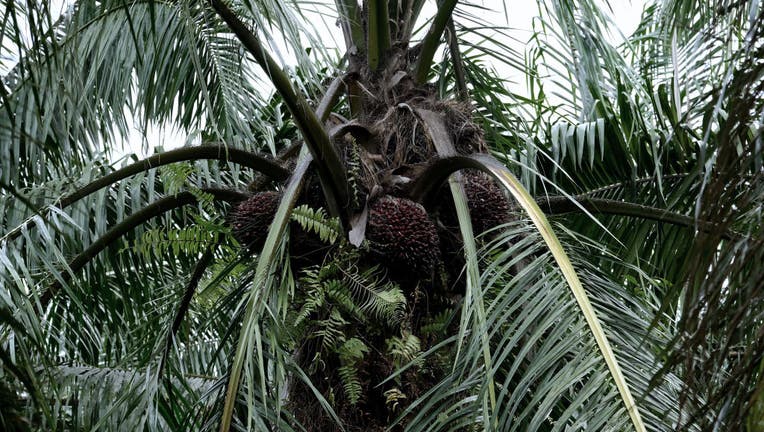 They are two young girls from two very different worlds, linked by a global industry that exploits an army of children.

Olivia Chaffin, a Girl Scout in rural Tennessee, was a top cookie seller in her troop when she first heard rainforests were being destroyed to make way for ever-expanding palm oil plantations. On one of those plantations a continent away, 10-year-old Ima helped harvest the fruit that makes its way into a dizzying array of products sold by leading Western food and cosmetics brands.

Ima is among the estimated tens of thousands of children often working alongside their parents in Indonesia and Malaysia, which supply 85% of the world’s most consumed vegetable oil. An Associated Press investigation found most earn little or no pay and are routinely exposed to toxic chemicals and other hazardous conditions. Some never go to school or learn to read and write. Others are smuggled across borders and left vulnerable to trafficking or sexual abuse.

The AP used U.S. Customs records and the most recently published data from producers, traders and buyers to trace the fruits of their labor from the processing mills where palm kernels were crushed to the supply chains of many popular kids’ cereals, candies and ice creams sold by Nestle, Unilever, Kellogg’s, PepsiCo and many other leading food companies, including Ferrero – one of the two makers of Girl Scout cookies.

Juliette Gordon Low founded the Girl Scouts, which went on to become one of the largest and most successful organizations for girls worldwide.

Olivia, who earned a badge for selling more than 600 boxes of cookies, had spotted palm oil as an ingredient on the back of one of her packages, but was relieved to see a green tree logo next to the words "certified sustainable." She assumed that meant her Thin Mints and Tagalongs weren’t harming rainforests, orangutans or those harvesting the orange-red palm fruit.

But later, the whip-smart 11-year-old saw the word "mixed" on the label and quickly learned it meant exactly what she feared: Sustainable palm oil had been blended with oil from unsustainable sources. To her, that meant the cookies she was peddling were tainted.

Thousands of miles away in Indonesia, Ima led her class in math and dreamed of becoming a doctor. Then her father made her quit school to help meet his high company targets on the palm oil plantation where she was born. Instead of attending fourth grade, she squatted in the unrelenting heat, snatching up the loose kernels littering the ground.

She sometimes worked 12 hours a day, wearing only flip flops and no gloves, crying when the fruit’s razor-sharp spikes bloodied her hands or scorpions stung her fingers. The loads she carried went to one of the very mills feeding into the supply chain of Olivia’s cookies.

"I am dreaming one day I can go back to school," she told the AP.

Child labor has long been a dark stain on the $65 billion global palm oil industry, identified as a problem by rights groups, the United Nations and the U.S. government.

With little or no access to daycare, some young children in both countries follow their parents to the fields. In some cases, an entire family may earn less in a day than a $5 box of Girl Scout Do-si-dos.

"For 100 years, families have been stuck in a cycle of poverty and they know nothing else than work on a palm oil plantation," said researcher Kartika Manurung, who has published reports detailing labor issues on Indonesian plantations.

The AP’s investigation into child labor is part of a broader in-depth look at the industry that also exposed rape, forced labor trafficking and slavery. Reporters crisscrossed Malaysia and Indonesia, speaking to more than 130 current and former workers -- some two dozen of them child laborers – at nearly 25 companies.

Indonesian government officials said they do not know how many children work in the country’s massive palm oil industry. But the U.N.’s International Labor Organization has estimated 1.5 million children between 10 and 17 years old labor in its agricultural sector. Palm oil is one of the largest crops, employing some 16 million people.

In much smaller neighboring Malaysia, a newly released government report estimated more than 33,000 children work in the industry there – nearly half of them between the ages of 5 and 11. That report did not directly address the tens of thousands of so-called "stateless" boys and girls living in the country with parents who came from bordering countries.

An official from Malaysia’s Ministry of Plantation Industries and Commodities did not respond to repeated requests for comment, but Nageeb Wahab, head of the Malaysian Palm Oil Association, called allegations of child labor very serious and urged complaints to be reported to authorities.

Soes Hindharno, an official from Indonesia’s Manpower Ministry, said he had not received any complaints about child labor occurring in his own country, but an official from the ministry that oversees women and children’s issues labeled it an area of growing concern.

Many producers, Western buyers and banks belong to the 4,000-member Roundtable on Sustainable Palm Oil, a global association that provides a green stamp of approval to those committed to dealing with palm oil that’s been certified as ethically sourced. The RSPO has a system in place to address grievances, including labor abuse allegations. But of the nearly 100 complaints listed on its case tracker in the last decade in the two Southeast Asian countries, only a handful have mentioned children.

Dan Strechay, the RSPO’s global outreach and engagement director, said the association has started working with UNICEF and others to educate members about what constitutes child labor.

Palm oil is contained in roughly half the products on supermarket shelves and in almost three out of every four cosmetic brands, and many kids are introduced to it the day they’re born – it’s a primary fat in infant formula. As they grow, it’s present in many of their favorite foods: It’s in their Pop-Tarts and Cap’n Crunch cereal, Oreo cookies, KitKat candy bars, Magnum ice cream, doughnuts and even bubble gum.

Olivia is not the first Girl Scout to raise questions about the way palm oil makes its way into the cookies. More than a decade ago, two girls in a Michigan troop campaigned against its use, leading the Girl Scouts of the USA to join the RSPO and agree to start using sustainable palm oil, adding the green tree logo to its roughly 200 million boxes of cookies, which bring in nearly $800 million annually.

The Girl Scouts did not respond to questions from the AP, directing reporters to the two bakers that make the cookies -- Little Brownie Bakers in Kentucky and ABC Bakers in Virginia. Those companies and their parent corporations, Ferrero and Weston Foods respectively, also did not comment on the findings. But both said they were committed to sourcing only certified sustainable palm oil.

When contacted by the AP, other companies affirmed their support of human rights for all workers, with some noting they rely on their suppliers to meet industry standards and abide by local laws. If evidence of wrongdoing is found, some said they would immediately cut ties with producers.

"We aim to prevent and address the issue of child labor wherever it occurs in our supply chain," said Nestle, maker of KitKat candy bars. And Kellogg’s, the parent company of Pop-Tarts, said it was committed to working with suppliers to source "fully traceable palm oil." There was no response from Mondelez, which owns Oreo cookies, or Cap’n Crunch parent company PepsiCo.

Now 14, Olivia, who lives in Jonesborough, Tennessee, has started a petition to get palm oil removed from Girl Scout cookies. And she’s stopped selling them.