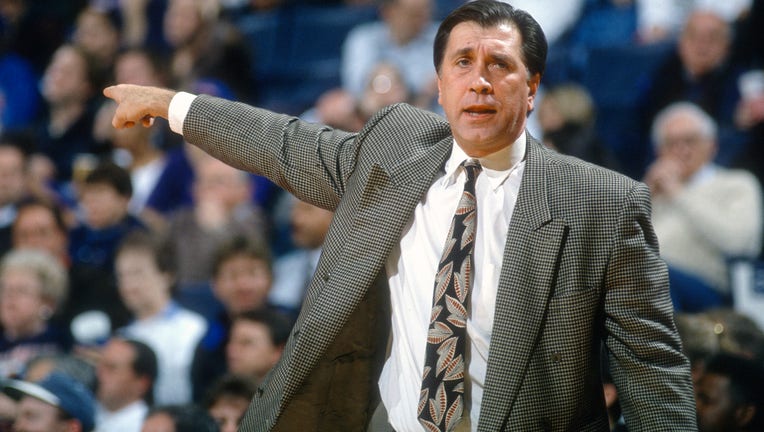 LANDOVER, MD - CIRCA 1994: Head coach Rudy Tomjanovich of the Houston Rockets looks on against the Washington Bullets during an NBA basketball game circa 1994 at US Airways Arena in Landover, Maryland. Tomjanovich coached for the Rockets from 1992-20

Former Rockets Coach Rudy Tomjanovich was officially announced on Saturday as a member of the 2020 class of the Naismith Memorial Basketball Hall of Fame.

An honor that is long overdue.

He is one of only three coaches to own an NBA title and an Olympic championship. The other two are the late Chuck Daly and Lenny Wilkens, both in the Hall of Fame.

Hall of Fame center Hakeem Olajuwon is thrilled for Rudy.

“I’ve been hoping that it would happen for a long time. What he has done for the game of basketball speaks for itself. I’m proud of him and I’m very happy for him.”

“Finally, Rudy T gets in the Hall of Fame,” Drexler said. “He gets his just due as a coach. He could’ve been in as a player as well.

“He was a phenomenal player, but it’s good to see that. Back-to-back champions, ’94 and ’95, Rudy’s a great guy. His players loved him. He was a player’s coach and we love him here in Houston.”

Drexler agreed with the thought that for Tomjanovich, better late than never.

“It fit Rudy like it fit (former University of Houston Coach) Guy Lewis,” Drexler said. “Kind of the same thing, better late than never. They both deserved it and Rudy finally gets his just due among the great coaches that have been a part of this game.”

Hall of Fame guard Calvin Murphy and Tomjanovich were teammates with the Rockets from 1970 to 1981.

“I’m just pleased as punch,” Murphy said. “Rudy and I went through the war together. We’ve seen the good, the bad and the ugly.

“Seeing that he’s now joining me in the greatest fraternity of sports, being in the Hall of Fame, it doesn’t get any better than that. I know Rudy well enough to know, that tears of joy are going through him and his family right now. I am so pleased that it has finally come his way.”

Murphy is pumped that Tomjanovich still has plenty of time to cherish the moment.

“Rudy is going into the Hall of Fame now and he’s gonna have time to reflect back on his career and what he’s done in the sport of basketball,” Murphy said. “He goes in as a coach, but he has the credentials to go both directions (as a player as well). So he’s going to get a chance to really enjoy what he’s done.”

Dennis Lindsey, executive vice-president of basketball operations for the Utah Jazz, began his NBA career working for Tomjanovich and the Rockets in 1996.

Lindsey spent 11 years in Houston, eventually being named assistant general manager before moving on to the San Antonio Spurs in the same position.

Lindsey said he and Tomjanovich and several other former members of the Rockets organization celebrated Friday via long-distance Friday.

“We were beyond ecstatic for him. Beyond being accomplished and credentialed as a professional, he just means so much to us on a personal level. I’m sure at an appropriate time we’ll be giving him the business. Right now it’s time for pure celebration.”

Boylen could not agree more.

Like Lindsey, Boylen got his start in the NBA, working for the Rockets.

“It was emotional for me,” Boylen said. “This is something that’s been on my heart, all of us who have worked for him, for a long time.

“We couldn’t figure out why it hadn’t happened yet. He’s one of the only guys who’s won back-to-back titles and an (Olympic) gold medal.

“One of his greatest coach jobs was the (1998 FIBA World Cup) bronze medal he got with a short-handed team (no NBA players). That’s an unbelievable job coaching that team.

“The thing about Rudy, he has this aura about him, but it doesn’t come from being arrogant or cocky. It comes from he enjoys the work. He enjoys the togetherness, enjoyed the practices. He just had a way of pulling people together.

“He taught me a ton. A lot of the stuff we do in Chicago is what we did when we were in Houston. He doesn’t get enough credit I don’t think for the teams he coached and how well they did.”

Being elected to the Naismith Memorial Basketball Hall of Fame will go a long way toward changing all of that for Rudy Tomjanovich, Hall of Fame coach.