Ukraine’s Defense Intelligence Service shared these clips of a counterattack on a Russian tank regiment in the village of Skybyn, on the eastern outskirts of Kyiv, Thursday, March 10. Video via Storyful.

KYIV, Ukraine - Footage shared by Ukraine’s defense agency appeared to show Ukrainian forces taking out a Russian military tank regiment on the outskirts of Kyiv and forcing their retreat — one of many examples of the country’s rising will to fight since being invaded.

The video, shared early Thursday by the Defence Intelligence of Ukraine, showed a large convoy of tanks in the Brovary area, just outside of Kyiv, before several explosions are seen.

The defense agency said its attack on Russia’s military caused "significant losses in personnel and equipment," according to a statement translated to English. It also claimed to have taken out its commander, Col. A. Zakharov.

"The commander of the occupier's regiment, Colonel Zakharov, was liquidated. During the battle in the Brovary district of Kyiv region, the battalion tactical group (BTGr) of the 6th tank regiment (Chebarkul) of the 90th tank division of the Central Command suffered significant losses of personnel and equipment," the agency wrote on Twitter.

The intelligence service also said the attack caused a "retreat" of Russian forces. 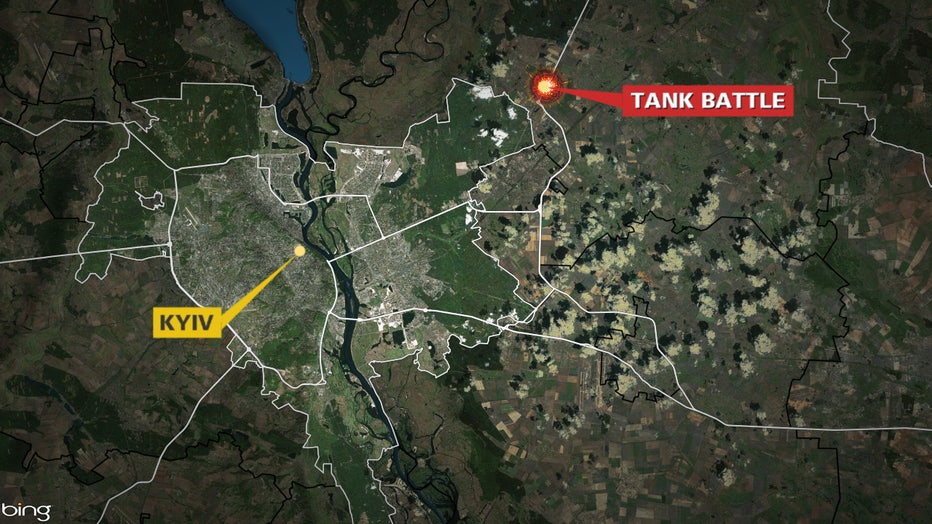 Map showing general location of tank counterassault outside of Kyiv.

Two weeks into its war in Ukraine, the attack served as one example of Russia having achieved less and struggling more than anticipated at the outset of the biggest land conflict in Europe since World War II. Its overall offensive has been slowed by an array of failings, including a lack of coordination between air and ground forces and an inability to fully dominate Ukraine's skies.

Moscow's main objective — toppling the Kyiv government and replacing it with Kremlin-friendly leadership — remains elusive, according to the Associated Press. 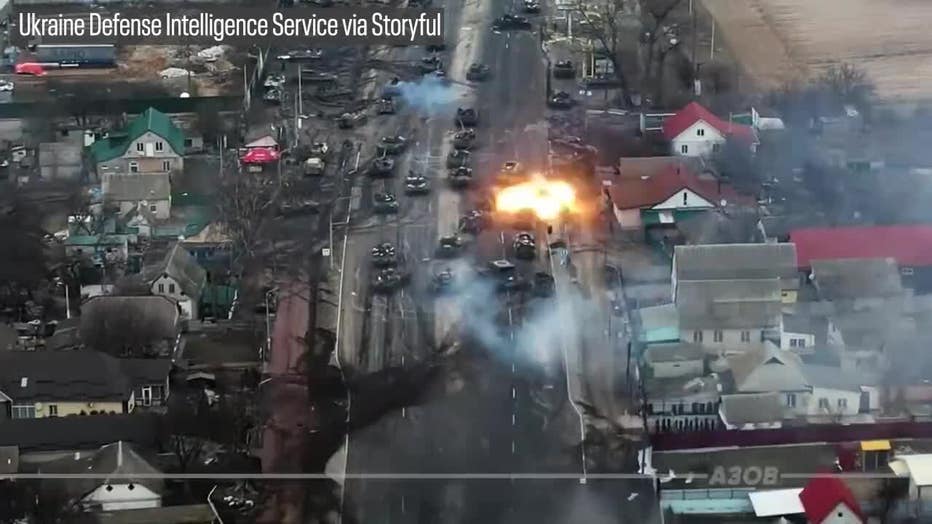 A screenshot from a video shared March 10, 2020, by the Defence Intelligence of Ukraine shows an attack on a large convoy of stationary tanks near Brovary, Ukraine. Credit: @DI_Ukraine via Storyful

The Pentagon on Wednesday estimated that Russia retains about 90% of the combat power it has deployed in Ukraine, accounting for weapons and vehicles destroyed or made inoperable as well as troops killed and wounded. Those losses, while modest at first glance, are significant for two weeks of fighting.

Russia likely has had between 2,000 and 4,000 troops killed thus far, said Lt. Gen. Scott Berrier, director of the Defense Intelligence Agency, adding that his agency has "low confidence" in its estimate.

Meanwhile, civilians trapped in besieged or destroyed areas of Ukraine were suffering from electricity outages, food shortages and other vital services. Thousands also hoped to find relief through safe exits on Thursday agreed upon by both sides of the war.

In Mariupol, the port city of 430,000 in southeastern Ukraine, Russia’s siege of the city entered its ninth day and local authorities were hurrying to bury the dead in a mass grave amid intense shelling.

Mariupol has suffered at least 8 major airstrikes in the past 48 hours, with a children's hospital and the central fire department among those hit. More than 70 bodies have been interred in the common grave since it was opened Tuesday, according to the Associated Press.

About half of those buried were killed in the intense shelling of the city, estimated an AP journalist who visited the burial ground. Others died at home from natural causes, but authorities were unable to arrange for the collection of the bodies or their burial.

With no sign of Russian President Vladimir Putin backing away, the war appears likely to drag on. CIA Director William Burns told a congressional panel Tuesday that Putin is frustrated and likely to "double down" in Ukraine. He said that could mean "an ugly next few weeks" as the fighting intensifies.