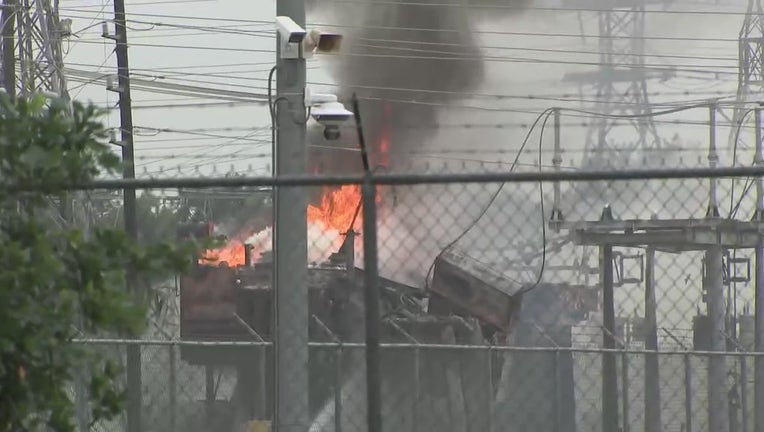 HOUSTON - Authorities are looking into what caused a transformer fire at a CenterPoint Energy facility in the Spring Branch area, which in turn resulted in the building to be heavily engulfed in flames Friday morning.

Details are limited as it's an active scene but several units are en route to assist Houston firefighters at its location in Kempwood and Brittmore. Responding firefighters and the TranStar cameras show the building fully engulfed in flames.

It's unclear how the fire started, as of this writing. However, HFD Firefighter Abby Ramos with the Public Information Office says no injuries have been reported from the blaze but have set up a shelter in place, which as of 2:30 p.m. has been lifted. Additionally, there have been no reported outages in the area.

Firefighter Abby Cortez, who gave preliminary information on the scene, told FOX 26 Houston there was thankfully no risk to the public.

Currently, officials have requested a drone from the Pearland Fire Department to assist with their investigation.

In a statement, CenterPoint Energy encouraged residents to avoid the area.

"The substance on fire is mineral oil used to insulate and cool the transformer. The oil is PCB (Polychlorinated Biphenyl) free. CenterPoint Energy encourages residents to listen to local authorities and avoid the area. We would like to thank first responders and emergency personnel for their support."

CenterPoint Energy shared a second statement with FOX 26 saying the cause is still unknown but they will be closely looking into it.

"CenterPoint Energy will be conducting an investigation into the cause of the fire at our Addicks Substation in Spring Branch. We would like to thank first responders and emergency personnel for their response and support during this incident."