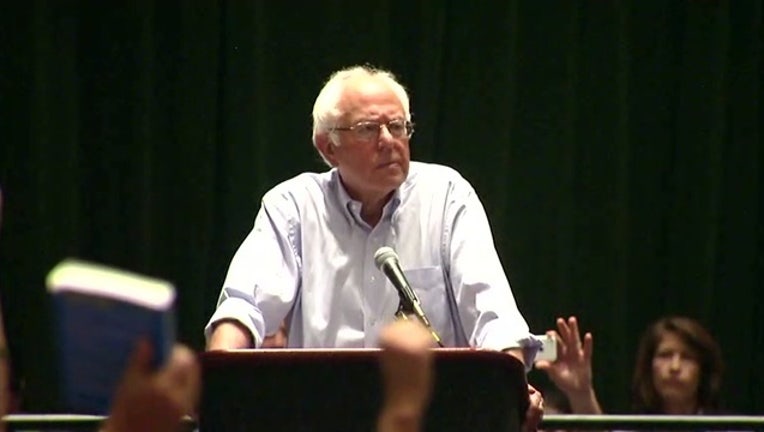 PHILADELPHIA (AP) -- With boos and chants of "Feel the Bern," die-hard backers of Bernie Sanders signaled on Monday that they just aren't ready to coalesce around the presidential bid of Hillary Clinton despite his pleas.

At a raucous meeting with his most loyal supporters, the Vermont senator implored his hundreds of delegates to defeat Donald Trump in November, calling the Republican candidate a "bully and a demagogue." He said it was imperative to elect Clinton and her running mate, Virginia Sen. Tim Kaine.

"Make no mistake. We have made history," Sanders told the crowd. He stressed that the accomplishments and progress would be lost if Clinton doesn't win.

The appeal elicited boos and some cheers, as delegates shouted, "We want Bernie!"

Many of Sanders' delegates, frustrated with the primary process and furious with outgoing party chair Debbie Wasserman Schultz, were still weighing ways to disrupt the four-day event. They said they couldn't fathom backing Clinton at the Democratic National Convention.

"To tell us to do that," said Ryan Lopez, a California delegate, of Sanders' request, "it goes against everything that we're fighting for."

Amos Miers, 39, of St. Petersburg, Florida, expressed frustration that Sanders didn't elaborate on why they should support Clinton.

"We reject backing Hillary without some explanation," Miers said. "We're going to express ourselves. We're not going to get steamrolled."

Others said Sanders was simply pushing them to consider the long-term implications.

"I'm with Bernie. I'm following his lead. He says we've got to defeat Trump," said Lawrence Hamm, a Sanders delegate from Montclair, New Jersey. "I agree with Bernie. I respect those who don't. Strategically, at this point Trump represents the worst elements of American society."

The meeting was held shortly before Monday's start of the party's convention. It also came hours after Sanders loyalists heckled Wasserman Schultz at a Florida delegation breakfast -- her first appearance since her decision to step down following the release of hacked Democratic Party emails.

While Wasserman Schultz was opting not to gavel in the proceedings, her role remains a sore spot for Sanders' delegates. Many expressed dismay that Clinton has given Wasserman Schultz the position of honorary chair of her campaign's "50-state program."

"That was a slap in the face," said Emily Wells, 34, a delegate from Arlington, Texas.

And the reaction to Sanders' call for his supporters to vote for Hillary Clinton was fevered.

"I had to boo," said Anita Lynch, a Colorado delegate. Lynch, 74, donned a shirt showing Sanders' as a Muppet and wore a sticker that said "Bernie Stops Trump." A longtime Democrat, Lynch said she wants to engage in some type of action on the convention floor but isn't sure what she'll do. "I am feeling like I want to protest."

Sanders' campaign manager Jeff Weaver said he was hopeful that "everybody acts respectfully."

Bill Leopold, a Pennsylvania delegate, said he will gladly support Clinton because Trump is an "existential threat" to the country.

"The perfect is the enemy of the good," he said.