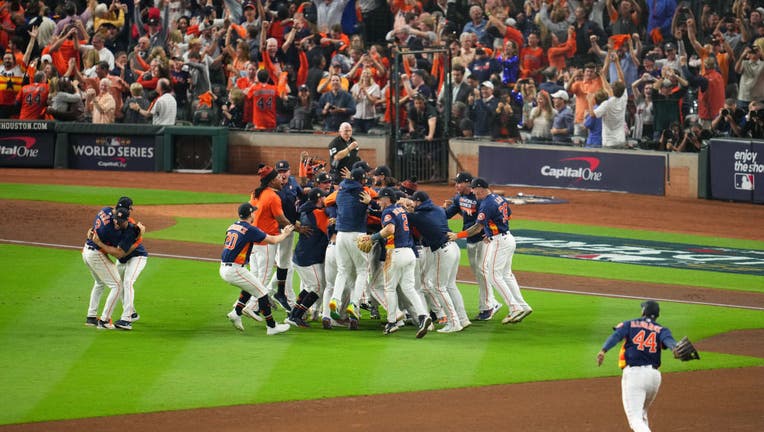 HOUSTON, TX - NOVEMBER 05: Members of the Houston Astros celebrate after taking Game 6 against the Philadelphia Phillies to win the 2022 World Series at Minute Maid Park on Saturday, November 5, 2022 in Houston, Texas. (Photo by Cooper Neill/MLB Phot

HOUSTON - The Houston Astros are 2022 World Series champions and DICK'S Sporting Goods stores are offering fans the opportunity to get their hands on some gear.

Select DICK'S Sporting Goods stores around the Houston area will be extending their store hours following the amazing clinch by the Astros on Saturday after the game and on Sunday.

The store is encouraging fans to get their gear through their Contactless Curbside Pickup service.

World Series Championship gear will be available online following the win, and customers can order for in-store or curbside pickup within two hours after the game.

Following Game 6, the locations listed below will extend their store hours to be open late, except for Parkdale Mall, and offer World Series Championship gear. On Sunday, the stores will open early at 7 a.m. Hours are subject to change.

VIDEO: Look back on FOX 26's visit to Philadelphia during 2022 World Series

The Shoppes at ParkWest