U.S. House hearing from federal officials including the FBI Director on how and when the January 6 Capitol attack happened.

"This was not dissent. It was disorder. It posed an existential crisis and a test of whether our democracy could survive—a sad reminder that there is nothing guaranteed about our democracy. But while it shocked and saddened the nation and the world, six months later, we can say unequivocally that democracy did prevail—and that we must all continue the work to protect and preserve it," Biden said.

The president and the first lady also sent their condolences to the families of Capitol officers who were injured or killed during the insurrection, "We pray for them and for our nation," Biden said.

The insurrection left seven people dead during and after the rioting, including Ashli Babbitt who was shot by a Capitol officer and three other former President Donald Trump supporters who suffered medical emergencies. Two police officers died by suicide in the days that followed, and a third officer, Capitol Police Officer Brian Sicknick, collapsed and later died after engaging with the protesters. A medical examiner determined he died of natural causes.

RELATED: Congressman donates suit he wore to clean up after US Capitol riot to Smithsonian

The Justice Department is still hunting for scores of pro-Trump rioters who stormed the Capitol in an effort to stop lawmakers from certifying Biden’s win six months later, even as the first of more than 500 people already arrested have pleaded guilty. The struggle reflects the massive scale of the investigation and the grueling work still ahead for authorities in the face of an increasing effort by some Republican lawmakers to rewrite what happened that day.

Among those who still haven’t been caught: the person who planted two pipe bombs outside the offices of the Republican and Democratic national committees the night before the melee, as well as many people accused of attacks on law enforcement officers or violence and threats against journalists. The FBI website seeking information about those involved in the Capitol violence includes more than 900 pictures of roughly 300 people labeled "unidentified."

Part of the problem is that authorities made very few arrests on Jan. 6. They were focused instead on clearing the building of members of the massive mob that attacked police, damaged historic property and combed the halls for lawmakers they threatened to kill. Federal investigators are forced to go back and hunt down participants.

The FBI has since received countless tips and pieces of digital media from the public. But a tip is only the first step of a painstaking process — involving things like search warrants and interviews — to confirm people’s identities and their presence at the insurrection in order to bring a case in court. And authorities have no record of many of the attackers because this was their first run-in with the law. 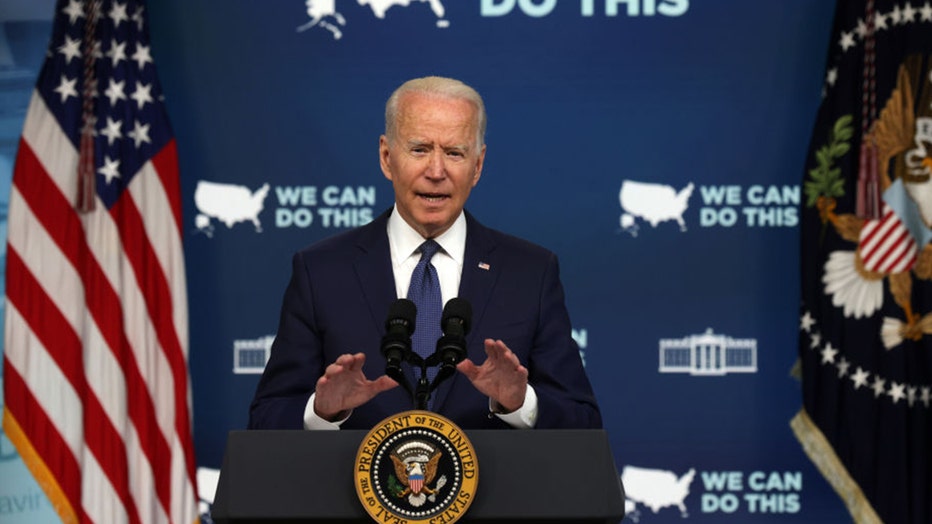 FILE - U.S. President Joe Biden speaks during an event on COVID-19 response and the vaccination program at the South Court Auditorium of Eisenhower Executive Office Building July 6, 2021 in Washington, DC.

"Most of these people never showed up on the radar screen before," said Frank Montoya Jr., a retired FBI special agent who led the bureau’s field offices in Seattle and Honolulu. "You watch the movies and a name comes up on the radar screen and they know all the aliases and the last place he ate dinner, all with a click of a button. Unfortunately, that’s not how it is in reality."

Biden continued in his statement to urge bipartisan cooperation to "restore decency, honor, and respect for the rule of law. And it impels our government—both the executive and legislative branches—to take the urgent steps needed to protect the fundamental right to vote."

"That requires people of goodwill and courage to stand up to the hate, the lies, and the extremism that led to this vicious attack, including determining what happened so that we can remember it and not bury it hoping we forget," Biden said.

Meanwhile, Democrats are facing renewed pressure to pass legislation that would protect voting rights after a Supreme Court ruling made it harder to challenge Republican efforts to limit ballot access in many states.

A 6-3 ruling on July 1 regarding a case out of Arizona was the second time in a decade that conservatives on the Supreme Court have weakened components of the Voting Rights Act of 1965, a landmark Civil Rights-era law. But this opinion was released in a much different political climate, in the aftermath of President Donald Trump’s lie that last year’s election was stolen.

Trump’s fabrications spurred Republicans in states such as Georgia and Florida to pass tougher rules on voting under the cloak of election integrity.

Democrats on Capitol Hill have already tried to respond with a sweeping voting and elections bill that Senate Republicans united to block last week. A separate bill, the John Lewis Voting Rights Advancement Act, which would restore sections of the Voting Rights Act that the Supreme Court previously weakened, has been similarly dismissed by most Republicans.

Those setbacks, combined with the Supreme Court’s decision, have fueled a sense of urgency among Democrats to act while they still have narrow majorities in the House and Senate. But passing voting legislation at this point would almost certainly require changes to the filibuster, allowing Democrats to act without GOP support.

"Absolutely this increases the pressure to take a very hard look at whether the Senate is an institution that will allow itself to be rendered powerless and dysfunctional," said Rep. John Sarbanes, a Maryland Democrat who sponsored a voting bill that passed the House in March.