HOUSTON - A Houston area high school coach is recovering after getting chased down and attacked by a group of students Thursday after school.

A student shared his disturbing cellphone video with FOX 26 taken as students chase down the coach. The brutal ambush happened Thursday afternoon outside Langham Creek High School. In the video, you can see a group of students running after the coach. Then, some students punch the coach and he falls to the ground.

A spokesperson from Cypress-Fairbanks Independent School District (CFISD) couldn’t tell us how the coach is doing.  However, people familiar with what happened said he’s okay and recovering.

RELATED: 'I want to be fired,' Lamar CISD teacher heard on camera ranting towards students

FOX 26 met with students and parents outside Langham Creek High School Friday. Almost all the students had seen video of the attack.

"I heard there were kids doing donuts and stuff, causing a ruckus with their dirt bikes," said Logan Wisniewski, a student.  "The coach wasn’t happy with it.  He asked them politely to stop doing that.  The kids weren’t having that, so they decided to jump him."

SkyFOX flew above the high school Friday afternoon as several parents stood in line to pick up their children early. After the attack, reports surfaced of at least one threatening social media post mentioning the possibility of a school shooting.

"I was shocked," said Houston.  "I kind of didn’t want to go to school today.  I was really trying to see if I could go home." 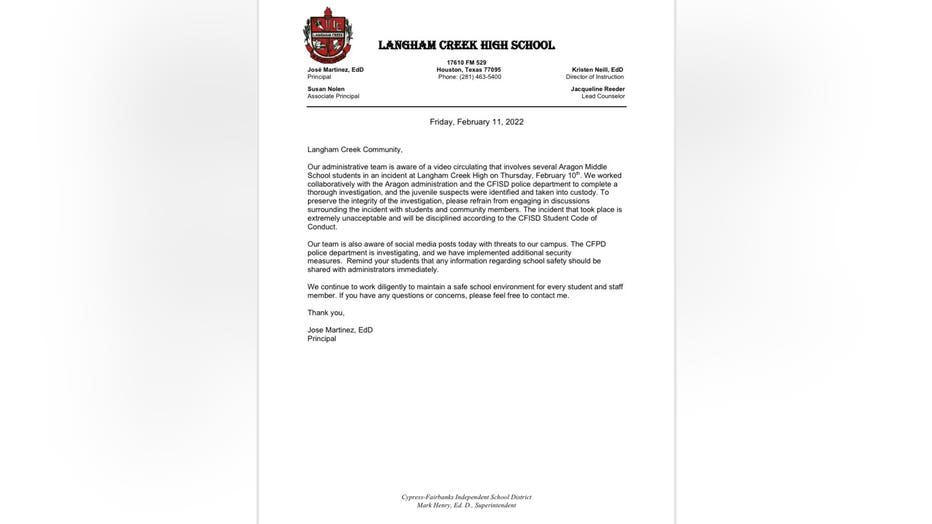 "Our administrative team is aware of a video circulating that involves several Aragon Middle School students in an incident at Langham Creek High on Thursday, February 10th," said Principal Jose Martinez.  "We worked collaboratively with the Aragon administration and the CFISD police department to complete a thorough investigation, and the juvenile suspects were identified and taken into custody. To preserve the integrity of the investigation, please refrain from engaging in discussions surrounding the incident with students and community members. The incident that took place is extremely unacceptable and will be disciplined according to the CFISD Student Code of Conduct.

"Our team is also aware of social media posts today with threats to our campus. The CFPD police department is investigating, and we have implemented additional security measures. Remind your students that any information regarding school safety should be shared with administrators immediately.    We continue to work diligently to maintain a safe school environment for every student and staff member. If you have any questions or concerns, please feel free to contact me."