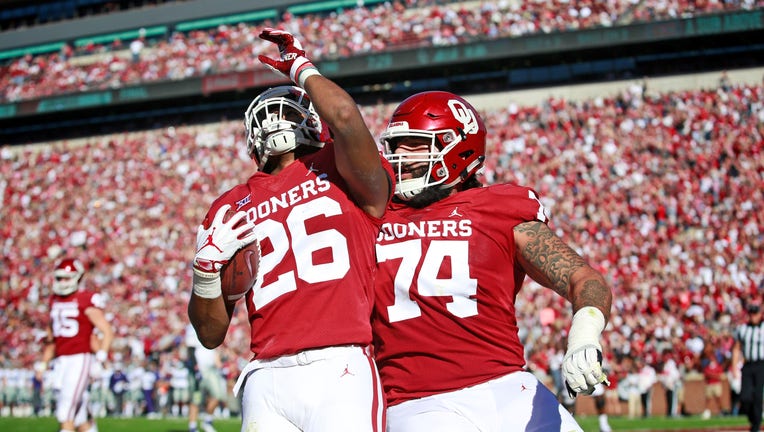 STILLWATER, Oklahoma - Kennedy Brooks rushed for 160 yards and a touchdown to help No. 7 Oklahoma beat No. 21 Oklahoma State 34-16 on Saturday night.

It could have been a lot more.

“Very steady, continues to be him,” Oklahoma coach Lincoln Riley said. “Very in synch with the offensive line. He’s been so close to popping a 60- 70-yarder. There were about five tonight when we thought he was out.”

In his past four games, Brooks has rushed for 534 yards and averaged 6.7 yards per carry.

“He’s held on to the ball, he’s used great ball security,” Riley said. “He always gets what’s there. He never leaves something on the table and sometimes he gets even more.”

Jalen Hurts passed for 163 yards and a touchdown, rushed for 63 yards and a score and caught a touchdown pass for the Sooners (11-1, 8-1 Big 12, No. 7 CFP) in their fifth straight victory in the series.

Oklahoma has won 21 consecutive November games dating to 2014. The Sooners will play Baylor in the Big 12 championship game next Saturday.

Oklahoma State’s Chuba Hubbard, the nation’s leading rusher, ran for 104 yards and a touchdown for his 10th consecutive game with at least 100 yards rushing.

He entered the game averaging 166.5 yards rushing per game.

“They were putting safeties down in there, so we tried to throw it more,” Oklahoma State coach Mike Gundy said. “Once we got down by more than a score, they could be more aggressive and we had to throw it more and became a one-dimensional team.”

Oklahoma held Oklahoma State to 335 yards. Parnell Motley led the way for the Sooners with an interception, two forced fumbles and a fumble recovery.

Oklahoma State’s Matt Ammendola made a 25-yard field goal at the end of the first half to cut Oklahoma’s lead to 20-13.

Oklahoma went ahead 27-16 on a 93-yard drive that Brooks capped with a 3-yard touchdown run.

With Oklahoma still up 27-16, Oklahoma State took a chance by going for it on fourth-and-three at the Oklahoma 27, but Dru Brown’s pass fell incomplete. Oklahoma stopped the Cowboys again on fourth down in the fourth quarter.

Oklahoma: The Sooners put together another strong defensive performance. The Sooners held the Cowboys to one touchdown and forced them to kick field goals three times, including twice after Oklahoma State drove inside the Oklahoma 10-yard line.

“You can’t kick field goals against an offense that can score like they can,” Gundy said.

Oklahoma State: The Cowboys still can’t get past the Sooners. Gundy fell to 2-13 in his career against Oklahoma.

Thanks to Auburn beating Alabama, the Sooners are in position to move up. Oklahoma State might not move much because Cincinnati, Iowa State and Virginia Tech also lost.

Oklahoma State will play in a bowl game.

Oklahoma will play Baylor in the Big 12 championship game next Saturday.