FOX 26 Reporter Tiffany Justice has more as the bond was revoked then reset for a murder suspect tied to a tiger in a Houston neighborhood.

FORT BEND COUNTY, Texas - A judge has reset bond for a murder suspect who has been tied to the case of a missing tiger in Houston.

Victor Hugo Cuevas, 26, was released on a $50,000 bond from Fort Bend County Jail on Wednesday for a charge of felony evading arrest. On Friday, a judge reset his bond to $300,000 for a previous murder charge.

Cuevas was charged with felony evading arrest on Monday after police say he fled from a west Houston home with a tiger in his vehicle. He was out on bond at the time for a previous murder charge. 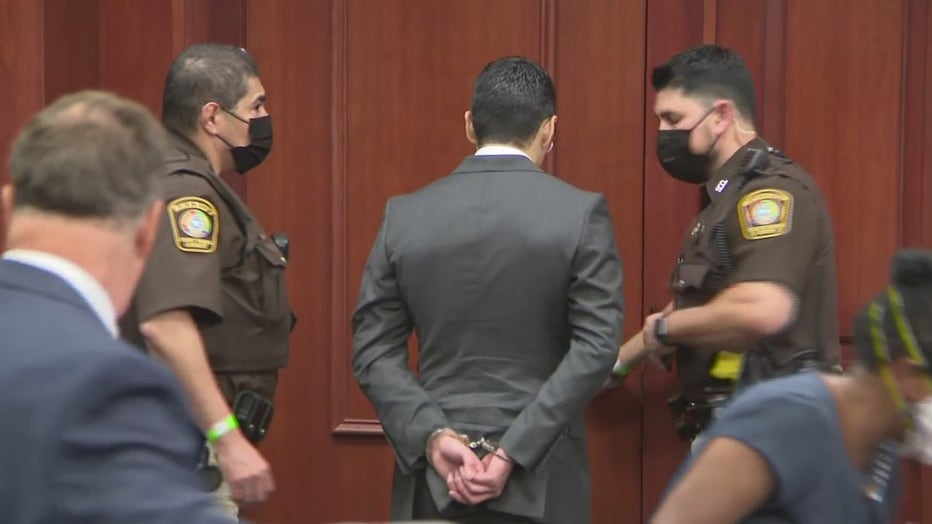 The Fort Bend County District Attorney’s Office filed a motion to revoke his bond for the previous murder charge. The hearing was held Friday morning.

RELATED: Murder suspect accused of leaving with tiger from west Houston home now out on bond

The new felony evading arrest charged stemmed from an incident involving a tiger that was seen walking around in a west Houston neighborhood.

Houston police received a report on Sunday evening about a tiger on Ivy Wall Drive near Riverlace Drive.

Prior to officers' arrival, video shows the tiger walking in front of a house. Cellphone video also shows an off-duty deputy confronting the tiger. The deputy can be seen with his gun out, but he never fires.

Police say Cuevas is the man who was then seen on video taking the tiger inside a home. According to HPD, Cuevas then put the tiger in his vehicle and left the scene.

Police say responding officers attempted to pursue the vehicle, but lost sight of it a short time later. He was charged with felony evading arrest.

Cuevas was arrested Monday evening in Fort Bend County. According to his attorney, he had been driving to turn himself in at the Harris County Jail. In addition, the tiger has not been located. The attorney claims the tiger doesn’t belong to Cuevas.

Houston does not allow tigers in city limits except in specific cases, such as at an accredited public zoo.

This is not the first time a tiger has been found in Houston. In 2019, police and BARC were alerted to a report of a tiger inside a southeast Houston home after someone called 311 anonymously. The tiger was taken to an animal sanctuary.

"We would like to know where this tiger is," said Kevin Hodge, General Curator for The Houston Zoo.

Hodge tells us, he’s very concerned for those around the tiger and for the tiger.

"They are training as cubs to learn how to hunt, and by the time they get to be 6 months old, they are starting to practice those behaviors," said Hodge. "It’s kind of sad because a lot of time, the fate of those tigers is not a very good one."

Hodge says, the tiger needs to be taken to an appropriate environment where it can receive the care it needs.

"Most of the ones that are in private hands are Bengal tigers. It’s incredibly important to provide things like whole prey and bones."