Jeff Bezos' Blue Origin launched into space with the billionaire, his brother Mark Bezos, 82-year-old Wally Funk and 18-year-old Oliver Daemen aboard the company's New Shepard rocket. The rocket successfully departed from the launch site in Van Horn, Texas, on the anniversary of Apollo 11 landing on the moon on July 20, 1969.

Fresh off of his recent space flight, Jeff Bezos offered to cover billions of dollars in NASA costs in exchange for his Blue Origin space company to receive a lunar-lander contract that the agency solely awarded to Elon Musk’s SpaceX.

In an open letter Monday, Bezos offered to cover up to $2 billion of the U.S. space agency’s costs in the current and next two government fiscal years.

The offer comes after NASA awarded SpaceX a $2.89 billion contract for the development of the first commercial human lander that will put the next two American astronauts on the moon. The agency had originally planned to offer multiple contracts to private-sector companies for the project — called the Human Landing System (HLS) — but cited budgetary restraints for its sole contract award, according to FOX Business.

"Blue Origin will bridge the HLS budgetary funding shortfall by waiving all payments in the current and next two government fiscal years up to $2B to get the program back on track right now," Bezos wrote in the open letter to NASA Administrator Bill Nelson.

He continued: "This offer is not a deferral, but is an outright and permanent waiver of those payments. This offer provides time for government appropriation actions to catch up." 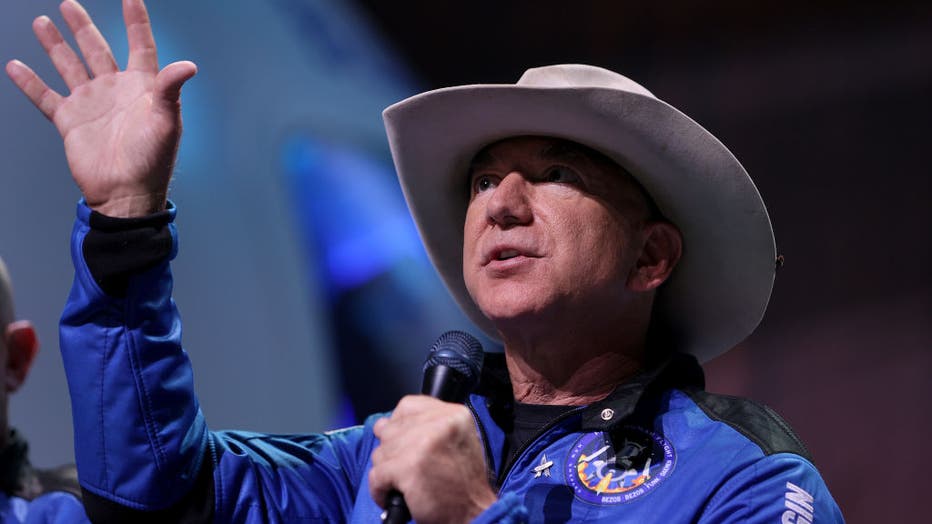 Bezos, who blasted into space on July 20 on Blue Origin’s first flight with people on board, emphasized the need for "meaningful competition" in NASA’s goal of returning to the moon.

"Instead of this single-source approach, NASA should embrace its original strategy of competition. Competition will prevent any single source from having insurmountable leverage over NASA," Bezos wrote. "Without competition, NASA’s short-term and long-term lunar ambitions will be delayed, will ultimately cost more, and won’t serve the national interest."

NASA is aiming to put the first woman and first person of color on the moon in 2024 as part of its Artemis program, with the commercially-developed lander. Before selecting the winner, NASA had previously awarded SpaceX, Blue Origin and Dynetics 10-month study contracts to develop lunar landers.

Bezos, who is also the founder of Amazon and owns The Washington Post, launched into space with three others on Blue Origin’s New Shepard on the 52nd anniversary of the Apollo 11 moon landing. The crew experienced several minutes of weightlessness during the 10-minute, automated flight.

Blue Origin and Richard Branson’s Virgin Galactic have been chasing space tourism dollars. But the pursuit has also drawn criticism for catering to the rich while so many are struggling amid the coronavirus pandemic.