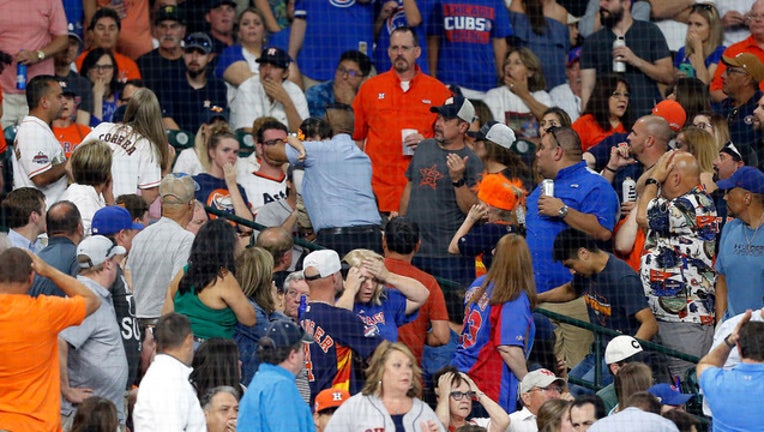 A young child is rushed from the stands after being injured by a hard foul ball off the bat of Albert Almora Jr. #5 of the Chicago Cubs in the fourth inning at Minute Maid Park on May 29, 2019 in Houston, Texas. (Photo by Bob Levey/Getty Images)

HOUSTON (FOX 26) - The two-year-old girl who was struck by a foul ball during a baseball game between the Chicago Cubs and Houston Astros last month is recovering from brain and skull injuries, according to the family's attorney.

The family retained Houston attorney Richard Mithoff to "consult about their options and to publicly thank the fans and Astros for their outpouring of support," the attorney says.

"The family's foremost concern is about the health of their child, but they also wanted me to extend their thanks to the fans and the Astros for their concern," said Mithoff.

According to a letter sent to the Astros organization by Mithoff, the girl sustained a skull fracture with associated subdural bleeding, brain contusions, and brain edema, and had a seizure. The girl is recovering at home and is taking medication to prevent further seizures, the letter says. Her progress will be reassessed in July.

"The Scotts appreciate the concern shown to their family from the Astros organization, baseball fans and the City of Houston. Their primary focus at this time is on their daughter's well-being," the letter reads.

The young fan was taken to the hospital after getting struck by a foul ball during the game on May 29. Cubs outfielder Albert Almora Jr. hit a line drive in the fourth inning into the field-level stands down the third base line, where it hit the girl. He immediately put his hands on his head and took a couple of steps toward the seats. He then fell to his knees near home plate and was consoled by teammate Jason Heyward and manager Joe Maddon.

"Albert is an emotional young man with children, so that made it even more real to him," Maddon said. "I understood exactly what he was going through right there."

It took several minutes for Almora, who appeared to be crying, to compose himself and continue the at-bat. Players from both teams appeared shaken up by the scene.

Almora still looked to be on the verge of tears after the game. He spoke haltingly as he described what happened and said he knew immediately as he looked into the stands that his ball had hit someone.

"Just the way life is," he said. "As soon as I hit it, the first person I locked eyes on was her."

Like all major league stadiums, Minute Maid Park has netting to protect fans near the field from foul balls. On the third base side in Houston, it extends to the end of the visiting team's dugout. The girl was sitting in what looked to be the third or fourth row about 10 feet past where the netting ends.

The day after the girl was struck by the ball the MLB released the following statement:

"The events at last night's game were extremely upsetting.  We send our best wishes to the child and family involved.  Clubs have significantly expanded netting and their inventory of protected seats in recent years.  With last night's event in mind, we will continue our efforts on this important issue."