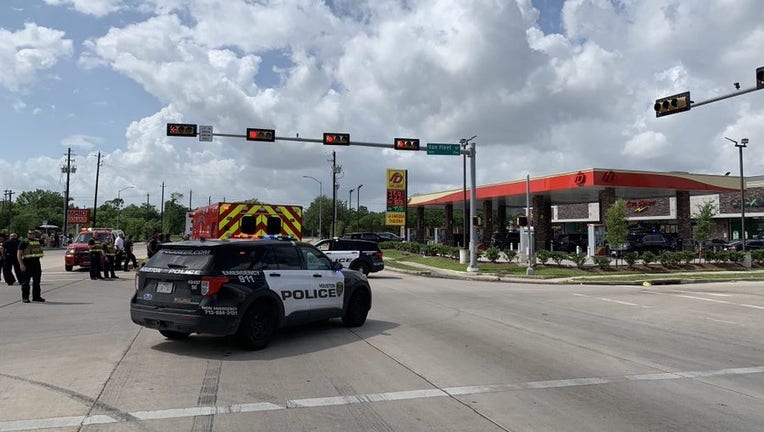 HOUSTON - A suspect was taken to the hospital with a gunshot wound after a SWAT scene in southeast Houston.

The incident began around 10 a.m. Monday in the 7400 block of MLK Blvd at Van Fleet.

According to Houston Police Department, SWAT officers were working with a Crime Suppression Team to apprehend a fugitive who had multiple outstanding felony warrants.

Police say officers had the suspect, who was a passenger in a car, under surveillance. The car pulled into a gas station parking lot, and the driver parked and got out. The suspect remained in the vehicle by himself, authorities say.

"Officers felt that was a good and safe time with nobody else in the vehicle to try to bring the suspect into custody," said HPD Executive Chief Matt Slinkard.

As officers activated their emergency equipment and pulled up to the vehicle, police say the suspect moved to the driver’s seat and reversed the vehicle to try to exit the parking lot.

Authorities say the suspect struck a police vehicle. According to police, the suspect then pulled forward as officers were approaching, and one officer discharged his firearm. It’s unclear at this time how many shots were fired.

The suspect remained in the vehicle. Police say they had information that the suspect was armed.

"Officers backed off at that point because the suspect remained in the vehicle and wanted to make a safe approach and try to get that suspect out of the car. At that time they did not know if the suspect had been struck or if he needed medical attention, but they believed that he likely did," Slinkard said.

For their safety, officers waited for some time before approaching and deployed gas into the vehicle to try to get the suspect to come out, authorities say.

After the gas was deployed, police say one more shot was heard that may have come from the suspect's weapon in the vehicle, but that is still under investigation.

The police department says it is also too early in the investigation to know if the suspect was shot by the officer, or if his wound may have been self-inflicted.

The suspect was taken to the hospital in critical condition.

The officer who discharged his weapon is a full-time member of the SWAT team and an 11-year veteran of the Houston Police Department.