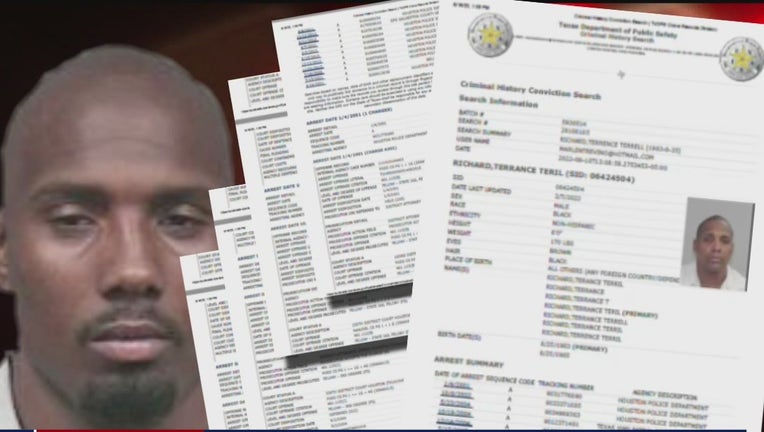 HOUSTON - On August 1, 2021, Houston police say a 14-year-old girl was sitting outside her apartment on the 9600 block of Homestead Rd in North Houston. Around 10 p.m. that night, investigators say 39-year-old Terrance Terrell Richard drove up to the girl, forced her into his car, then drove around to the back parking lot of the complex, and proceeded to rape her.

Records say a witness alerted a security guard about a suspicious light blue vehicle on the property. The teen managed to escape the car and yelled "he raped me" when she exited, according to documents.

Authorities say the security guard approached the car and tried to intervene by opening the door, but Richard drove off and dragged the guard on the ground until he hit a curb. Investigators said Richard then hit the security guard with his car multiple times before driving off.

The teen later had a sexual assault examination done. However, those results didn’t come back until five months later. The DNA matched Richard, who was already in the system.

"He’s got 19 previous charges or convictions and nine of those are felonies. Those range from domestic violence, terroristic threats of a family member, burglary of a motor vehicle. He was out on parole for burglary when this case happened," said Nichole Cristoph, Deputy Director of Crimestoppers Houston.

Peter Stout, the President and CEO of Houston Forensic Science Center, said the backlog of cases is concerning, especially when it causes a domino effect of problems.

Stout attributes a lack of resources, staffing, and delays from the pandemic to the backlog.

"It still comes down to people, and we just don't have enough people and we got to get more people in there and people take time to bring them online. Now that we are behind, it's going to take time to dig out from behind, increase those resources, train people and get them to a point where they are proficient to do casework that takes time," Stout said.

A case is considered backlogged if it takes more than 30 days for results to come back. Currently, Houston Forensics says there’s 284 sex assault cases and 66 other types of cases that are also backlogged in their system.