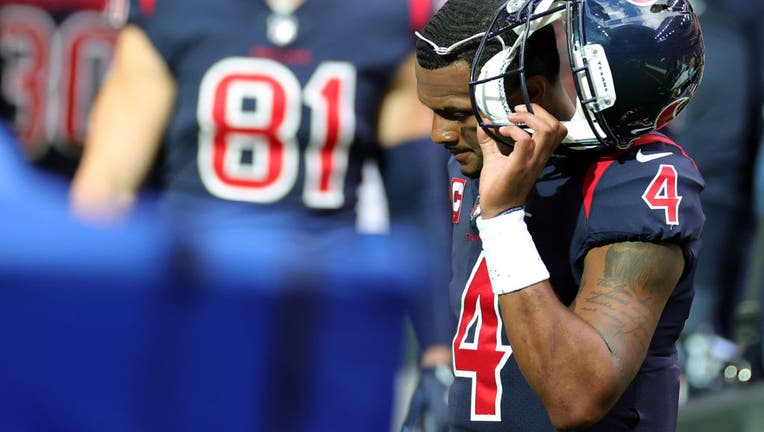 FILE: Quarterback Deshaun Watson #4 of the Houston Texans walks off the field after a fumble in the fourth quarter of the game against the Cincinnati Bengals at NRG Stadium on December 27, 2020 in Houston, Texas. (Photo by Carmen Mandato/Getty Images

HOUSTON - All 30 massage therapists who made claims against the Houston Texans organization accusing NFL quarterback Deshaun Watson of sexual misconduct have settled.

The women's attorney Tony Buzbee confirmed the settlements to FOX 26 on Friday morning. He added that the terms are confidential.

The Texans took swift action in settling, as less than three weeks ago, a woman filed a lawsuit against the organization, saying she was assaulted during a massage session with Watson in 2020.

The suit said the Texans "turned a blind eye" to Watson's "troubling behavior," and that the organization "enabled Watson’s egregious behavior."

Meanwhile, the Texans' leadership says the organization had no knowledge of their former quarterback's alleged misconduct.

"We were shocked and deeply saddened when we first learned of the allegations against our then franchise quarterback in March 2021.

Although our organization did not have any knowledge of Deshaun Watson’s alleged misconduct, we have intentionally chosen to resolve this matter amicably. This is not an admission of any wrongdoing, but instead a clear stand against any form of sexual assault and misconduct.

We hope that today’s resolution will provide some form of closure to the parties involved, our fans and the Houston community at large. As an organization, we will now turn our focus to the future and doing what we can to ensure respect for all."

Attorney Tony Buzbee released the following statement regarding the settlements with the Texans organization:

Today all of the women who have made, or intended to make, claims against the Houston Texans organization have resolved their claims. The terms of the settlements, to include the amounts paid each, are confidential. I will have no further comment on the allegations or the Texans’ alleged role, other than to say that there is a marked contrast in the way in which the Texans addressed these allegations, and the way in which Watson’s team has done so. As has been previously reported, only one of the thirty women who made allegations against the Texans filed a formal lawsuit. That particular lawsuit will be dismissed with prejudice as soon as the appropriate settlement paperwork is complete.

It takes an incredible amount of fortitude for a victim of sexual misconduct to come forward. It is even more difficult when the alleged wrongdoer is famous, rich or powerful. As I’ve said before, these cases started with one phone call, from one brave and strong woman: Ashley Solis. Because of her willingness to speak out, soon others followed. I admire Ashley Solis and the other women who were courageous enough to make their voices heard. I hope their bravery serves as an example to others who have been subjected to similar conduct. Every story has a hero—in this story that hero is Ashley Solis and the other women who, despite the ridicule, criticism, and vitriol directed at them, endured.

The four filed cases against Deshaun Watson will continue. We hope to try them all in the spring of next year. In the mean-time we will continue to do the important work to prepare for such.

The news comes less than a month after Watson settled 20 of 24 lawsuits accusing him of sexual misconduct when he played for the Texans.

Watson, who was traded to the Cleveland Browns in March, has denied all misconduct.

Four civil lawsuits filed against Watson will continue, and will likely be tried in the spring of 2023.

Attorneys for the women are seeking the documents from the NFL’s investigation into Watson, including recorded interviews, witness statements, and communications. The notice of intention to take deposition by written questions also asks for photographs and "any other type of documents in your files and/or documents regarding the investigation of Deshaun Watson."

MORE: All eyes on NFL’s pending decision regarding Deshaun Watson

A hearing with NFL disciplinary officer Sue L. Robinson, a retired judge, ended late last month. Robinson is expected to rule before the Browns open training camp late next month on whether the 26-year-old violated the league’s personal conduct policy and whether to impose discipline.