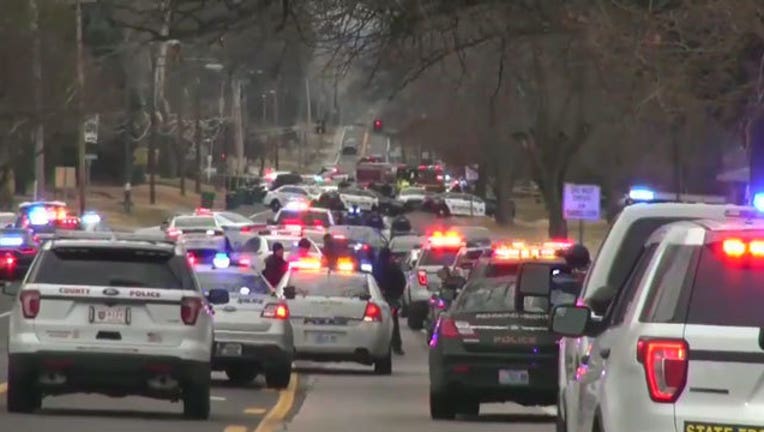 BELLEFONTAINE NEIGHBORS, Mo. (AP) -- A gunman shot two suburban St. Louis police officers in the chest before barricading himself inside a home Thursday, but bulletproof vests apparently saved both officers from serious injury.

"By God's will, both officers were struck in a location where they had protection," McGuire said.

Police had been looking for a 37-year-old man wanted for questioning after a Wednesday night report of shots fired, McGuire said. Officers saw the suspect walking in the neighborhood around 7:15 a.m. Thursday.

A witness, Steve Jones, told reporters that the officers were trying to reason with the man when they suddenly tackled him on a lawn. He said the officers pepper sprayed the suspect when he started to stand up, and that the man then shot the officers from about 15 feet (4.5 meters) away. It wasn't immediately known if the officers shot back.

The man then ran about a block and barricaded himself inside a house. Police used a loudspeaker to urge the man to surrender.

McGuire said the man didn't appear to be holding hostages. Police aren't sure if the suspect lives in the house, which is surrounded by police, including a tactical unit.

"It's still an active scene," McGuire told media at the scene. "We have officers that are in danger right now, right down the street from us."

Bellefontaine Neighbors Mayor Bob Doerr told the St. Louis Post-Dispatch the vests were purchased for officers about a year ago.