2 kids among 8 shot after fight between groups at separate birthday, graduation parties in Dallas

A 10-year-old and 15-year-old were among eight people shot when a fight broke out after an argument between two separate groups of partygoers at a Dallas banquet hall overnight Saturday.

DALLAS - A 10-year-old and 15-year-old were among eight people shot when a fight broke out after an argument between two separate groups of partygoers at a Dallas banquet hall overnight Saturday.

The shooting happened just after 12:30 a.m., when Dallas police were called about shots fired outside a strip mall in the 4600 block of E. R L Thornton Freeway in Old East Dallas.

Police said there were two events at the banquet hall, a graduation celebration and a 60th birthday party, and there was an argument between people at the separate parties.

The argument led to a fight, and then shots were fired, injuring eight people.

"We all dropped to the floor. Everybody did," said one woman who did not want to be identified.

She was at the birthday party, when said kids from a neighboring suite came over and started trouble.

"It was a family event. It was a birthday party. There was nothing but family," she added.

Several glass doors were shot out in the shopping center.

The witness said the teens were trying to get ahold of alcohol, but when they were denied, on their way out, they started shooting. 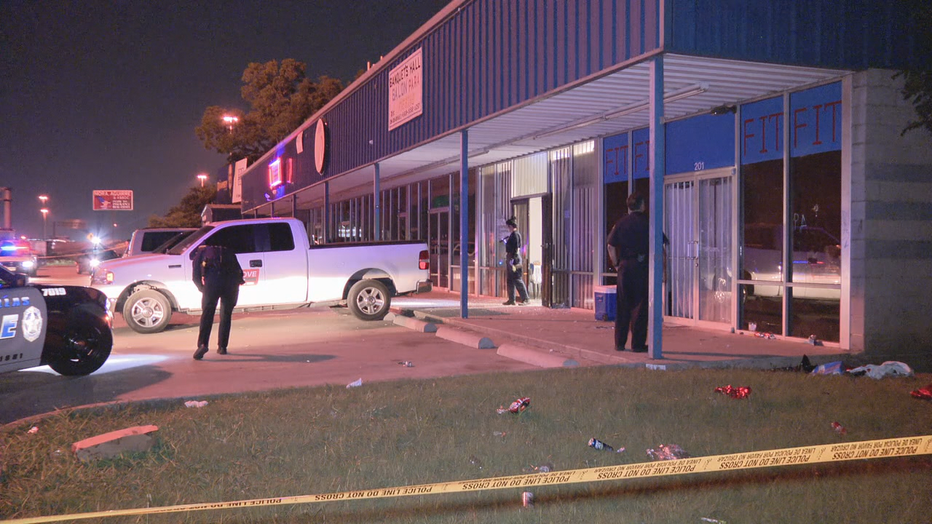 "We just started putting our families in cars and we rushed to Baylor ourselves," she said.

The woman said they were on hold with 911 for too long, and family members had to drive each other to the hospital. Her 10-year-old niece was shot in the leg and a 15-year-old was also shot in the leg.

"You know, this is a wake-up call for the whole neighborhood," said Kim Bargmann, who lives nearby.

People in the neighborhood have many questions, and theories, as to what’s sparking violent crime in Dallas.

"Kids shouldn’t have guns. It’s a parenting issue I believe," Bargmann said. "We don’t settle arguments with guns. When I grew up, it was fists. It’s changed."

There were dozens of people at both parties.

Looking back, they believe it’s a miracle the outcome wasn’t worse than it is.

No arrests have been made at this time.

Police have not said if they have any suspects.

There are surveillance cameras in the area, but police have not yet said if there is footage of the shooting.