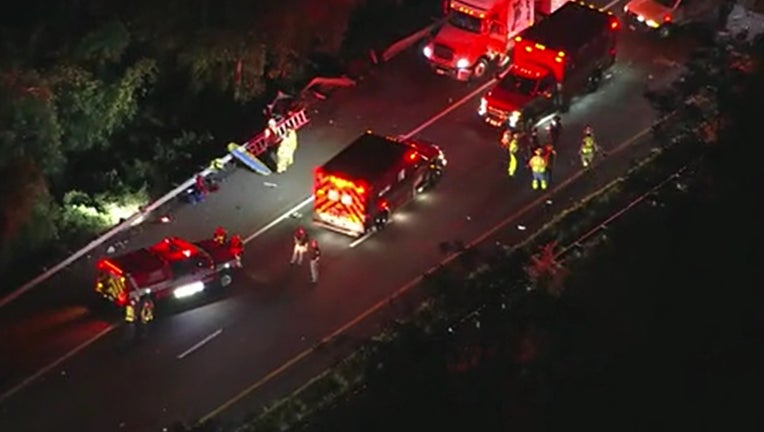 Photo from crash in Virginia on Thursday.

Two Houston residents were killed in an evening crash in Virginia on Thursday night.

According to Virginia State Police, the crash occurred along Interstate 66 at the 16-mile marker in Fauquier County.

Police said a Winnebago RV was traveling east on I-66 when it collided with an eastbound tractor-trailer.

The impact caused the RV to run off the interstate, through the guardrail, down an embankment, and into several trees.

Police said the driver of the RV, Ifreke E. Inyang, 25, of Houston, suffered minor injuries as a result of the crash. The driver was taken to Warren Memorial Hospital for treatment.

Two passengers in the RV, Lenisha T. Simon, 39, and Brenda M. Oyervides, 24, both of Houston, died at the scene.

Another passenger in the RV, a 23-year-old woman from Baton Rouge, Louisiana, suffered life-threatening injuries and airlifted to the hospital.

Four other passengers in the RV suffered minor injuries in the crash and were also taken to the hospital.

The driver of the tractor-trailer suffered minor injuries in the crash.

Officials said Inyang was charged with reckless driving and for driving without a valid operator's license.