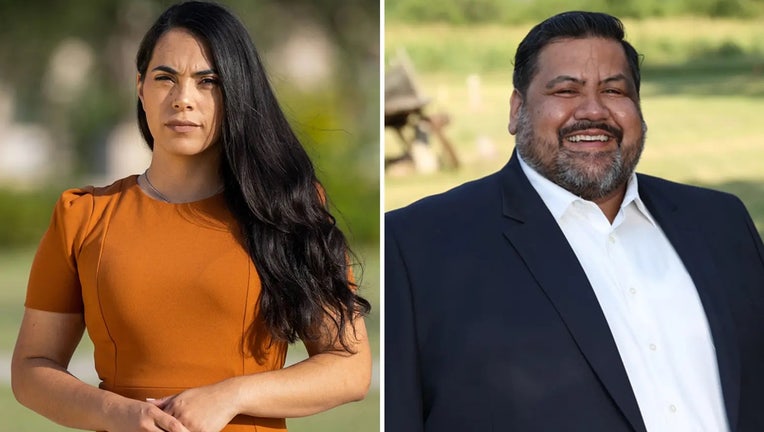 Republican Mayra Flores prevailed Tuesday in a special election for an open congressional seat in South Texas, marking a major breakthrough for Republicans eager to blaze new inroads in the historically blue region.

She beat Dan Sanchez, the leading Democrat, outright in the closely watched race and will be the first Mexican-born congresswoman. She will get to serve only until January, but Republicans heralded her win as a shot of momentum in their new South Texas offensive.

With all precincts reporting Tuesday night, Flores had 50.98% of the vote and Sanchez had 43.33%. There were two other, lesser-known candidates — Democrat Rene Coronado and Republican Juana "Janie" Cantu-Cabrera — in the race.

Sanchez is a Harlingen lawyer and former Cameron County commissioner, while Flores, a respiratory therapist, is the Republican nominee for the seat in November.

Speaking a little after 9:30 p.m., Flores declared victory and said her campaign "took no one for granted."

"For over 100 years, we have been taken for granted," she said at her election night party in San Benito. "I will show you what real representation looks like. I will represent all people."

Sanchez conceded in a statement that pointed the finger at national Democrats for not doing enough to defend the seat. They had argued the race was not worth the investment.

"Based on the results, we came up short tonight despite being outspent by millions of dollars from out of state interests and the entire Republican machine," he said. "Too many factors were against us, including little to no support from the National Democratic Party and the Democratic Congressional Campaign Committee."

The special election was called to finish the term of former U.S. Rep. Filemon Vela, D-Brownsville, who resigned in March to work for the lobbying firm Akin Gump.

The special election was unique in that it was held under the previous lines of the 34th District, which President Joe Biden won by only 4 percentage points. But redistricting made the district more friendly to Democrats in November, when the Democratic nominee is U.S. Rep. Vicente Gonzalez, D-McAllen.

Republicans have been eager to flip the seat as part of their new offensive in South Texas after Biden’s underperformance throughout the predominantly Hispanic region in the 2020 election. Flores and her allies spent over $1 million on TV ads in the special election, while national Democrats largely stayed away, arguing it was not worth it to save a seat that will be up again in November — and under new, more favorable boundaries.

The dynamic put Democrats into an unusual underdog position in a region of the state they have long dominated. Vastly outspent by Flores, Sanchez repeatedly compared the special election to a David vs. Goliath fight, with himself playing David.

Despite their downplaying of the stakes, national Democrats ended up spending a little on the race once early voting got underway. The Democratic Congressional Campaign Committee helped fund a $100,000 digital ad buy with Sanchez’s campaign, and House Majority PAC — the top Democratic super PAC in House races — launched a $115,000 TV ad buy against Flores.

Flores campaigned hard on her story as the wife of a U.S. Border Patrol agent and as a Mexican immigrant whose parents brought her to the United States as a young child. She mostly ignored Sanchez but took a sharp tone against Washington, D.C., Democrats in general. In one of her TV ads, she said the Rio Grande Valley is "under attack" at the border and promised not to let the "compadrismo" — cronyism — "in Washington ruin our communities."

Sanchez also played up his background, starting with his upbringing on his family farm and later his long career in public service. He also campaigned as a moderate, calling himself a "conservative Democrat" and "pro-life" Catholic.

Sanchez and his allies did not ignore Flores, painting her as an extremist acolyte of former President Donald Trump due to past social media activity that cast doubt on the 2020 election results and included hashtags for the QAnon conspiracy movement.

Flores had the backing of top Texas Republicans including Gov. Greg Abbott and U.S. Sen. Ted Cruz, while Sanchez’s biggest supporters among elected officials were Gonzalez and Vela. Both Flores and Sanchez were endorsed by their respective state party chairs and vice chairs.

On Tuesday night, Flores most notably carried Cameron County, the most populous county in the district and a longtime Democratic stronghold along the Mexican border. She defeated Sanchez there by about a percentage point after Biden carried the county by 13 points in 2020.

National GOP groups were jubilant about Flores’ win Tuesday night, especially as they push to retake the House majority in November. The chair of the National Republican Congressional Committee, U.S. Rep. Tom Emmer of Minnesota, said in a statement that the race was a "referendum on Democrats’ reckless policies that created a border crisis, led to record-high inflation, and sent gas prices soaring."

But the head of the Texas Democratic Party, Gilberto Hinojosa, downplayed Flores’ victory in a statement, saying the GOP "could barely squeak out a win" given all their financial advantages. Echoing national Democrats, he expressed confidence that Flores would occupy the seat only for a matter of months.

"In January 2023, this seat will rightfully return to Democratic hands," Hinojosa said.