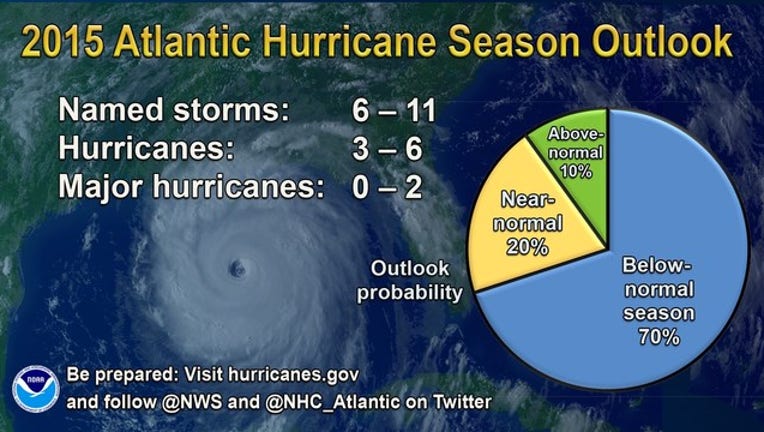 Hurricane season officially runs June 1 through Nov. 30. But this season's first storm, Tropical Storm Ana, came ashore in North Carolina earlier this month, bringing rain from Virginia to South Carolina. It did not cause any major problems.

This will be the 10th hurricane season since hurricanes Katrina and Rita devastated the Gulf Coast.

The NOAA projections include a "70 percent likelihood of 6 to 11 named storms," (with winds of 39 mph or faster) of which between three to six could develop into hurricanes (with minimum wind velocity of 74 mph). Of those projected hurricanes, no more than two will be major hurricanes of Category 3 or more.

"A below-normal season doesn't mean we're off the hook," said Sullivan. "As we've seen before, below-normal seasons can still produce catastrophic impacts to communities," a reference to the 1992 season in which only seven named storms formed, yet the first was Andrew, a Category 5 major hurricane that devastated South Florida.

"The main factor expected to suppress the hurricane season this year is El Niño, which is already affecting wind and pressure patterns, and is forecast to last through the hurricane season," said Gerry Bell, Ph.D., lead seasonal NOAA Climate Prediction Center hurricane forecaster. "El Niño may also intensify as the season progresses, and is expected to have its greatest influence during the peak months of the season. We also expect sea surface temperatures in the tropical Atlantic to be close to normal, whereas warmer waters would have supported storm development."

"It only takes one hurricane or tropical storm making landfall in your community to significantly disrupt your life," said Nimmich. "Everyone should take action now to prepare themselves and their families for hurricanes and powerful storms. Develop a family communications plan, build an emergency supply kit for your home, and take time to learn evacuation routes for your area. Knowing what to do ahead of time can literally save your life and help you bounce back stronger and faster should disaster strike in your area."