As of this week, the majority of the state is in drought with more than half being classified as being in an "extreme" (category D3) or "exceptional" (category D4) drought. Since last week's drought monitor, which is released weekly on Thursday mornings, category D4 got worse by more than 4%. 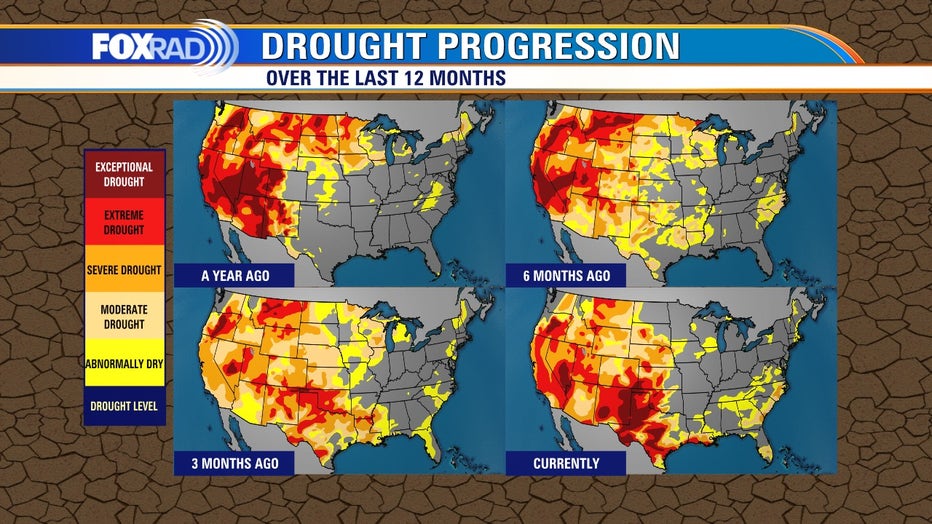 EXPLAINER: WHAT IS THE U.S. DROUGHT MONITOR?

By far, that hardest hit areas are west of I-35. Some of the driest conditions reach from the Rio Grande Valley to the Panhandle and from the Gulf Coast to West Texas. 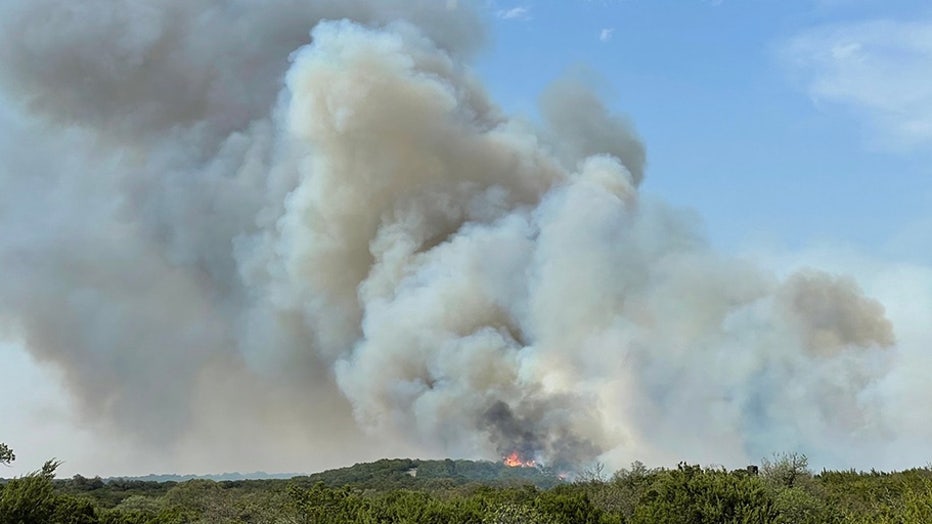 Evacuations ordered for some residents in Taylor County, Texas, as the Mesquite Heat Fire burns.

The worsening conditions have proven to be a perfect breeding ground for wildfires, as dozens have popped up across Texas in recent months.

Several large wildfires are currently burning and continue to rapidly grow and spread.

The Mesquite Heat Fire in Taylor County has prompted a disaster declaration as residents threatened by the wildfire evacuate. It is currently burning more than 9,600 acres and is only 5% contained.

Evacuations have been ordered in Taylor County, Texas, as the Mesquite Heat Fire grows to 1,500 acres.

Another large fire is raging in Wilbarger County, Texas. The Coconut Fire is currently around 25,000 acres and 20% contained. One firefighter received multiple burns and was taken to a hospital to be treated and has since been released.

MORE ON THE WILDFIRES: Disaster declared in Texas county as large wildfires continue to rapidly spread 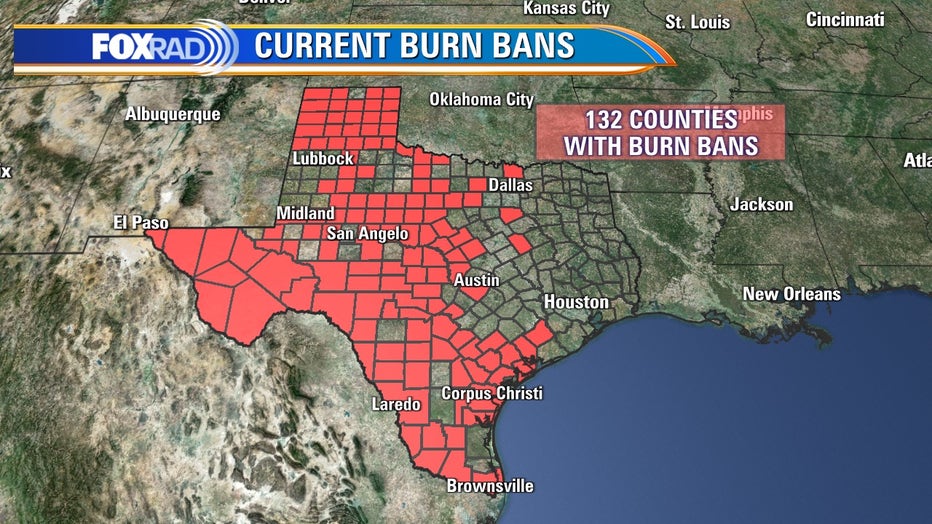 The dry conditions are also prompting burn bans across Texas, where more than half of the state also has a burn ban in place.

As of this writing, 131 of Texas' 254 counties currently have burn bans, which are issued by county judges and communicated by the Texas A&M Forest service.

In southeast Texas, that does include Wharton and Jackson Counties, where a severe to extreme drought is underway. 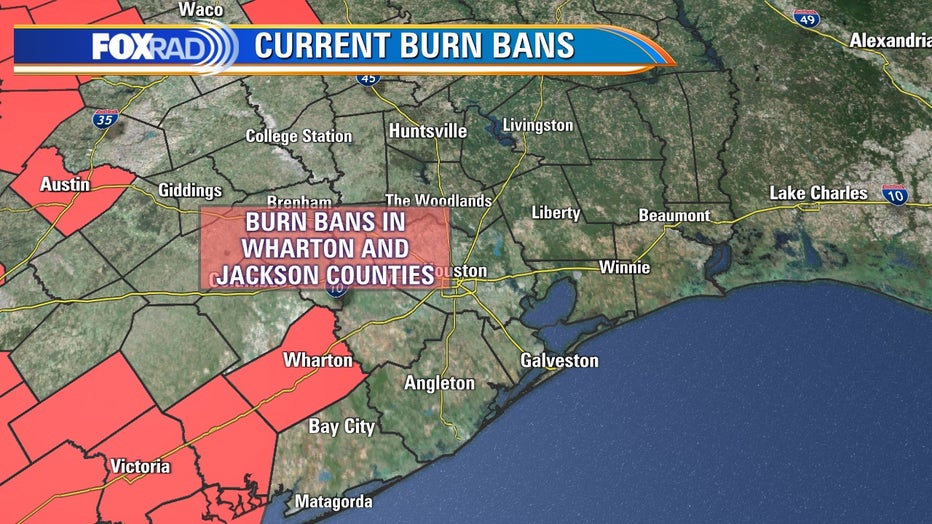 Many of our northern areas have lucked out on rainfall, receiving the bulk of the many systems that have passed through recently.

Rain in our area has not been evenly distributed this year with Bush Intercontinental Airport measuring nearly double the rainfall as Hobby. 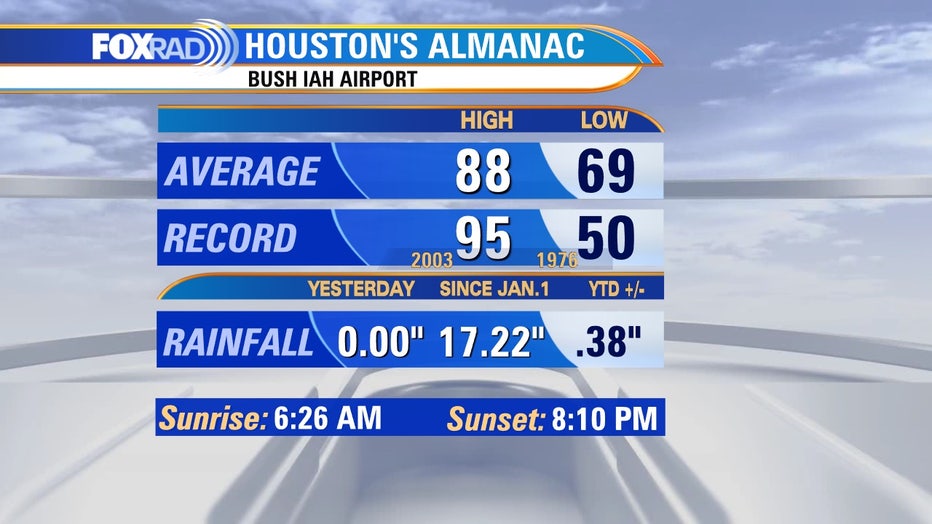 Year to date at Bush, we have received 17.22" of rainfall which is +0.38" above average year to date and the reason why north of town, areas like The Woodlands and Montgomery County are not experiencing any drought.

Meanwhile, Matagorda County has received less than .10" of rain over the last two months and that area is classified as being in an extreme drought.

And if we take a look at Galveston's almanac, where severe drought is being experienced along the coastline, that number changes drastically to -6.05" year to date. 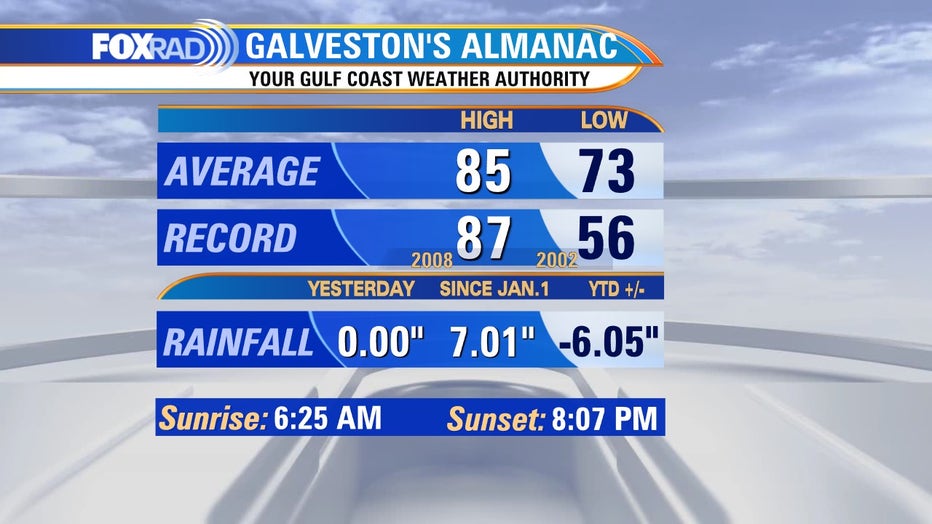 On the plus side, we are going into hurricane season with bone-dry bayous.

But overall, help appears to be on the way with a pattern change in the jet stream beginning Sunday, when we will finally break out of our hot, dry pattern. Much of Texas will experience a daily round of showers with much less heat.

Below is at look at the expected rain totals in Texas over the next five days. 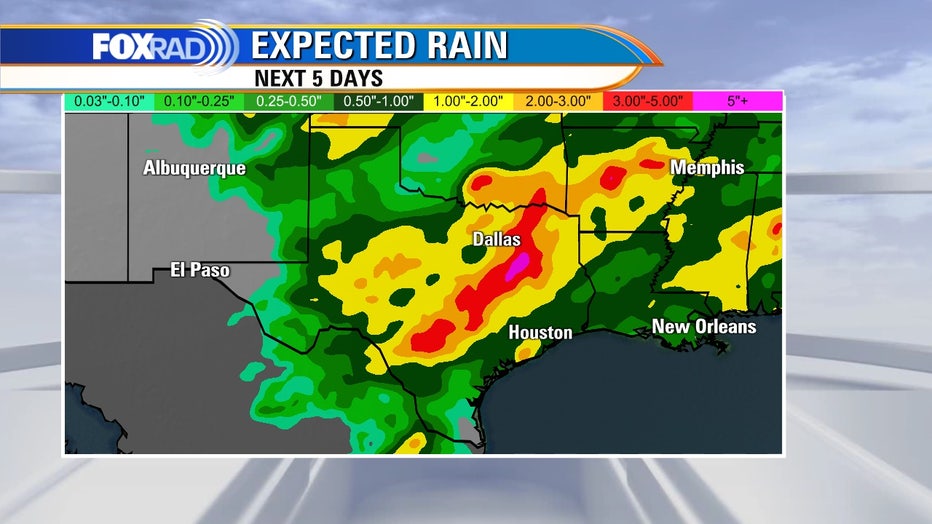 Could Texas crops be saved by the Moon?

With over half of the state currently in extreme to exceptional drought, farmers across the Lone Star State will be dealing with a rough growing season.

Click here to see how each respective drought category has impacted crop yields in Texas in the past.

But, some promising news on the scientific horizon, could be a help to farmers in the future dealing with detrimental drought conditions: scientists have successfully grown plants in moon soil for the first time ever. 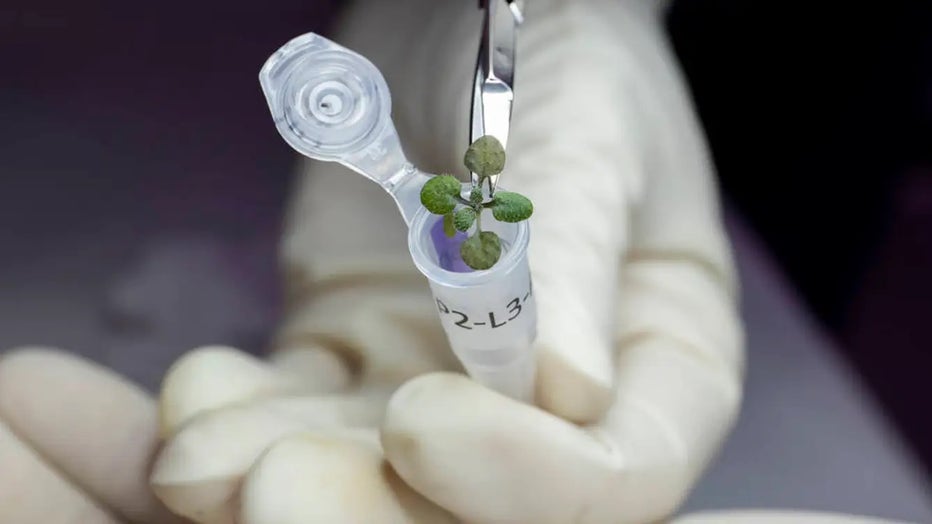 Placing a plant grown during the experiment in a vial for eventual genetic analysis.( UF/IFAS photo by Tyler Jones)

So what does that have to do with our Texas crops?

This development is not only monumental for space exploration, but can teach us a lot about growing in extreme environments here on Earth as the climate continues to warm.

"This research is critical to NASA’s long-term human exploration goals as we’ll need to use resources found on the Moon and Mars to develop food sources for future astronauts living and operating in deep space," said NASA Administrator Bill Nelson. "This fundamental plant growth research is also a key example of how NASA is working to unlock agricultural innovations that could help us understand how plants might overcome stressful conditions in food-scarce areas here on Earth."

READ MORE: Plants can grow on the moon but don’t expect a robust garden just yet