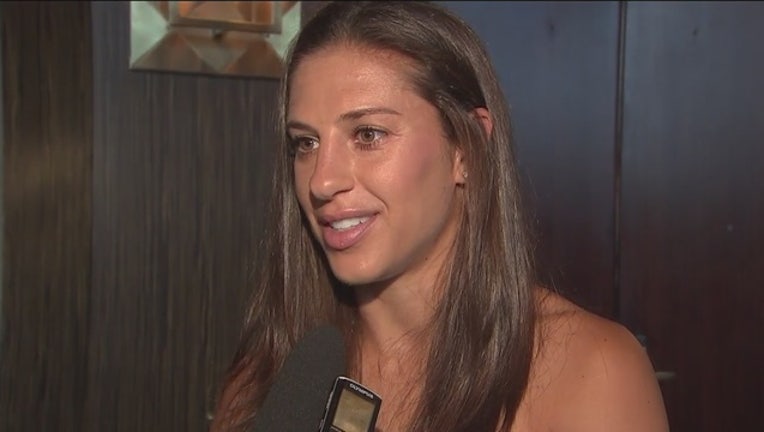 Alex Morgan, Carli Lloyd, Megan Rapinoe, Becky Sauerbrunn and Hope Solo maintain in the EEOC filing that they are paid nearly four times less than their male counterparts on the U.S. men's national team, based on U.S. Soccer's 2015 financial report. The filing was announced Thursday in a statement from the law firm representing the players.

"The numbers speak for themselves," Solo said in the statement. "We are the best in the world, have three World Cup Championships, four Olympic Championships, and the USMNT get paid more just to show up than we get paid to win major championships."

The union representing the players is currently involved in a legal dispute with U.S. Soccer over the terms of their collective bargaining agreement. The federation filed a lawsuit this year seeking to clarify that its contract with the U.S. Women's National Soccer Team Players Association runs through the Rio Olympics until Dec. 31. The union maintains the memorandum of understanding agreed to in March 2013 can be terminated at any time. That case is pending.

Attorney Jeffrey Kessler, one of the attorneys representing the players, claimed the tenor of the negotiations over the CBA created the need for the women to act in hopes of ending what they say is the "discriminatory and unfair treatment" they have endured for years.

"The reality is that this team is more valuable to the USSF than the men's team has been. That's what the facts show," Kessler said on a conference call with reporters. "And they would be justified in asking for more than the men are receiving. But the first step that they are seeking is equal treatment."

U.S. Soccer issued a statement maintaining that its "efforts to be advocates for women's soccer are unwavering."

"We are committed to and engaged in negotiating a new collective bargaining agreement that addresses compensation with the Women's National Team Players Association, to take effect when the current CBA expires at the end of this year," the statement said. "U.S. Soccer will continue to be an advocate on the global soccer stage to influence and develop the women's game and evolve FIFA's compensation model."

The top players on the women's team are paid about $72,000 a year by U.S. Soccer, along with bonuses, to play in a minimum of 20 exhibitions per year, the EEOC complaint says. Conversely, the men are paid per match, with a minimum of $5,000 a game, and additional payments based on the opponents' rankings and results.

The women have a potential to earn $99,000 if they win all 20 exhibitions, while their male counterparts would earn $100,000 minimum for appearing in the 20 games before the opponents and outcomes are figured in, and possibly as much as $263,320 a year if they win all of their games.

Citing another example of disparity, the complaint says that the women are paid $30,000 for making the World Cup team, while the men are paid $68,750 each.

U.S. maintains that the women's team set up the compensation structure, including a guaranteed salary rather than a pay-for-play model like the men, in the last collective bargaining agreement. The women earn an additional salary because the federation pays their salaries in the National Women's Soccer League.

The women's national team players also receive other benefits, including health care paid for by the U.S. Olympic Committee, that the men don't receive, the federation maintains.

USSF President Sunil Gulati said Thursday night that many factors are considered when it comes to player compensation, including the revenue the teams generate.

"We think very highly of the women's national team and we want to compensate them fairly, and we'll sit down and work through that with them when all of this settles down," Gulati said.

The U.S. women won the World Cup last year in Canada with a 5-2 victory in the final against Japan. The team earned a total of $2 million for winning the tournament, according to documents. The U.S. men's team earned $9 million the year before at the World Cup in Brazil, where they were knocked out in the round of 16. The prize payouts came from FIFA, soccer's international governing body, and not from U.S. Soccer.

The federation pays the men and women equally for qualifying for the Olympics and making the roster for the event.

"There are no legitimate non-discriminatory reasons for this gross disparity of wages, nor can it be explained away by any bona fide seniority, merit or incentive system or any other factor other than sex," said the complaint.

Democratic presidential candidate Hillary Clinton weighed in on the issue on Twitter: "Wouldn't want to face these women on the field or in the courtroom. Every woman deserves equal pay."

Landon Donovan, who played 14 seasons with the men's national team, posted to Twitter: "USWNT absolutely deserve to be treated fairly in all ways. Important to remember that these issues are/can be collectively bargained." He added: "Both USMNT and USWNT should be paid commensurate w/ the revenues they produce, not based upon what the other makes."

The EEOC investigates claims of discrimination on merit. There is no timetable for resolution of the matter. Federal law makes it illegal to discriminate against an employee because of race, color, religion, sex, national origin, age, disability or genetic information.

Many players on the national team have become increasingly vocal about gender equity in the sport, something that came to light in advance of last year's World Cup. A group of players led by Abby Wambach filed a complaint in Canada about the artificial turf playing surface, noting the men's World Cup is played on natural grass.

The players dropped the complaint before the tournament to focus on the competition. Wambach retired from the national team at the end of last year.

"This is a fight that we are going to have to continue to fight from here on forward," Solo said on a conference call. "I don't see it getting any easier, but it is something we are committed to. And it's not just in the sports world, it's everywhere you look."

The U.S. women, who have already qualified for this summer's Olympics in Brazil, are in Florida training for a pair of exhibition games against Colombia.