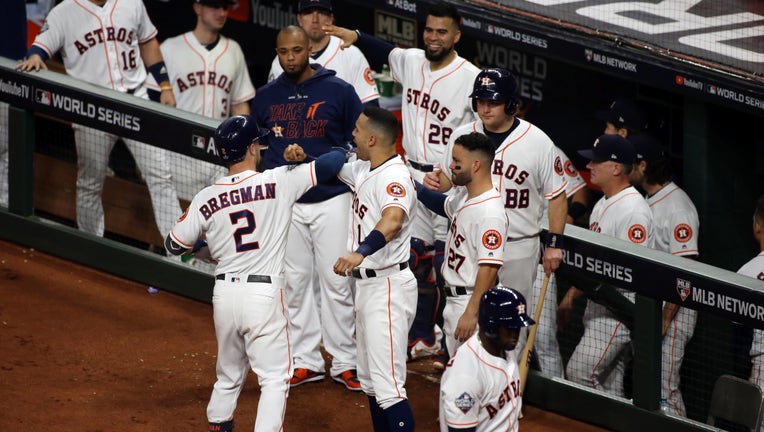 HOUSTON, TX - OCTOBER 29: Alex Bregman #2 of the Houston Astros is greeted in the dugout after hitting a solo home run in the first inning during Game 6 of the 2019 World Series between the Washington Nationals and the Houston Astros at Minute Maid P (Photo by Cooper Neill/MLB Photos via Getty Images / Getty Images)

HOUSTON - The Houston Astros will host the Washington Nationals on Wednesday in the winner-take-all Game 7 of the World Series.

The Nationals beat the Astros 7-2 Tuesday night in Houston to tie the series at 3-3.

The Astros are 60-21 in home games. Houston has a team batting average of .232 this postseason, Jose Altuve has lead them with an average of .338, including 11 extra base hits and nine RBIs.

The Nationals have gone 43-38 away from home. Washington has a team slugging percentage of .395 this postseason, Anthony Rendon leads them with a mark of .571, including nine extra base hits and 14 RBIs.

WHEN AND HOW TO WATCH ON TV

Former Houston Astros and Hall of Famers Jeff Bagwell and Craig Biggio will simultaneously throw out the ceremonial first pitches.

Matthew McConaughey will make the "Play Ball!" call. Deshaun Watson was anticipated to make the call, but he is unable to after a minor setback with his eye injury.

The roof at Minute Maid Park will be closed for Game 7.

Michael Brantley leads the Astros with 179 hits and has 90 RBIs.

Juan Soto leads the Nationals with 34 home runs and is batting .282.

Gates to Minute Maid Park open at 4 p.m. Wednesday. Fans with a ticket to the game can attend the Post Season Street Fest before the game from 4 p.m. to 7 p.m. on Crawford Street. There will be live music, food trucks, games and more.