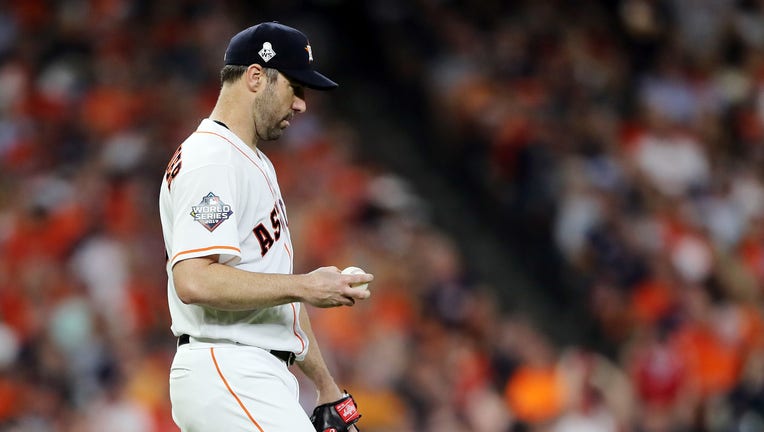 HOUSTON, TEXAS - OCTOBER 29: Justin Verlander #35 of the Houston Astros reacts after allowing a solo home run to Adam Eaton (not pictured) of the Washington Nationals during the fifth inning in Game Six of the 2019 World Series at Minute Maid Park on

HOUSTON - The Houston Astros lost to the Washington Nationals in Game 6 with a score of 7-2, tying up the series and taking both teams to a showdown for the championship in Game 7.

Alex Bregman carried his bat past first base after a solo home run that gave Houston a 2-1 lead in the first inning at rollicking Minute Maid Park, but it didn't last.

Stephen Strasburg took a gem into the ninth inning and Juan Soto ran all the way to first base with his bat following a go-ahead home run, the same way Houston slugger Alex Bregman did earlier.

Strasburg gutted through without his best fastball to throw five-hit ball for 8 1/3 innings, and now it's onto a winner-take-all Game 7 to decide the first World Series in which the visiting team won the first six games.

Eaton and Soto hit solo homers off Justin Verlander in the fifth, Anthony Rendon had five RBIs, including with a two-run homer in the seventh, and the Nationals beat the Astros 7-2 Tuesday night to tie the Series at three games apiece.

Fired up after a disputed call at first base went against them in the seventh, the Nationals padded their lead moments later when Rendon homered off Will Harris. Washington manager Dave Martinez, still enraged at umpires, was ejected during the seventh-inning stretch, screaming as a pair of his coaches held him back while the crowd sang along to "Deep in the Heart of Texas." Rendon added a two-run double off Chris Devenski in the ninth.

Nationals pitcher Max Scherzer, boosted by an injection of painkiller, is primed to return from an irritated nerve in his neck to start Game 7, Martinez said before the game. Scherzer was warming up in the seventh before Rendon's homer, then sat down as Martinez became the first manager tossed from a Series game since Atlanta's Bobby Cox in 1996.

Now the Nationals will attempt their ultimate comeback in a year in which they were written off time after time, hoping for the first title in the 51-season history of a franchise that started as the Montreal Expos and the first for Washington since the Senators in 1924. Zack Greinke will be on the mound for the Astros, who led the majors with 107 wins and are seeking their second title in three seasons.

Visiting teams have won three straight Game 7s in the Series since the Cardinals defeated Texas at home in 2011.